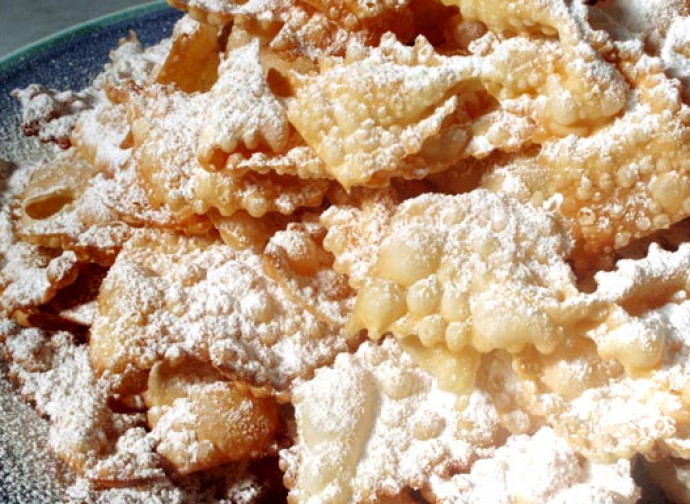 In Roman times, chiacchiere were called frictilia because they were fried in pork fat. They were supposedly prepared during the Saturnalia, the festivities that gave rise to our Carnival. However, they took on the name we know today thanks to Queen Margherita of Savoy.
Legend has it that in Naples the Queen asked her trusted court cook Raffaele Esposito for a cake that would perfectly accompany her afternoon chats with her guests: this inspired the royal chef with the brilliant idea that has come down to us.

Besides chiacchiere, these sweet fritters are also known as bugie, frappe, cioffe, strufoli or fiocchetti. Even within the same region, chiacchiere can be called by different names. An example? In Piedmont it is common to call them  risòle, gale or bugie; in Emilia they are called sfrappole, intrigoni or fried pizzas. In Venice, instead, chiacchiere are called galàni or crostòli.
Whatever we are used to calling chiacchiere, their preparation is easy.

Pour the flour into a bowl. Add the two eggs with the sugar, the grated orange or lemon peel, the juice of half a lemon, a pinch of salt and mix the ingredients lightly with a fork.

Add the butter previously heated in a bain-marie and the liqueur and knead until the dough is well mixed. Shape the dough into a ball and wrap it in cling film. Leave to rest in the fridge for 30 minutes.

After this time, take the dough and start rolling out the thin chiacchiere with the help of a pasta machine or a simple rolling pin, flouring the sheets well. Take a pastry cutter (or just a knife) and cut the pastry into the various shapes of the chiacchiere.

Usually the shapes are squares or rectangles with incisions in the centre.

In the meantime, take a small pan or fryer and start frying the chiacchiere in seed oil.

Leave them to drain thoroughly on absorbent paper. When they are cooked, you can dust them with icing sugar before serving. They are also delicious cold.