On the eve of renewing the "secret" agreement between China and the Vatican, Cardinal Joseph Zen, Bishop Emeritus of Hong Kong, spent four days in Rome in the hope of meeting Pope Francis to update him on the situation in Hong Kong and the Catholic Church in China. Zen, did not receive a response from the Holy Father. He told the Daily Compass: "I have come to warn [the pope] that the appointment of a pro-Chinese government bishop in Hong Kong would spell disaster for decades to come." Regarding the Holy See’s agreement with China he said: "The idea of striking accords with Beijing is insane. It's like trying to make a pact with the devil. There’s no grounds for dialogue whatever the argument. 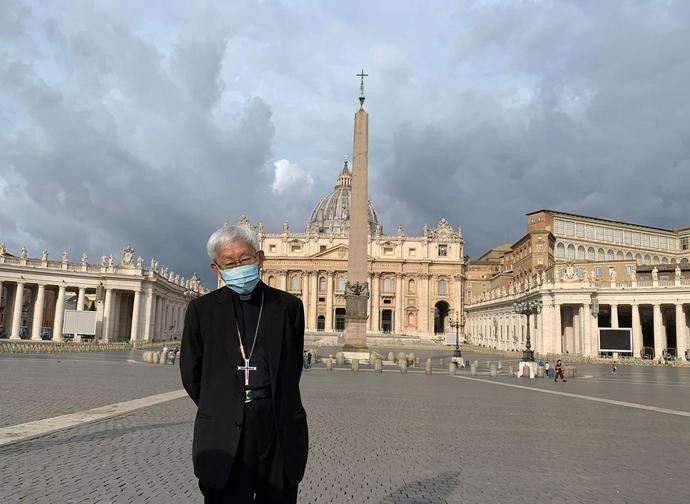 The 88-year-old cardinal traveled halfway across the globe to reach Rome to seek an audience with Pope Francis to discuss a very delicate matter. Yet, the pope’s door remained firmly shut. This is what happened last week while the Vatican made headlines worldwide with the abrupt removal of Cardinal Angelo Becciu from his official responsibilities. Hong Kong’s future, whose main defender is its former bishop, Cardinal Joseph Zen, is a more serious matter than Becciu’s recent ousting, at least in terms of what’s at stake for the Church in China.

We met with Cardinal Zen in Rome last Saturday evening, when the last rays of hope for a call from Francis vanished with dusk. A few hours later, the cardinal boarded his return flight to Hong Kong (where he will connect with us this Saturday Oct. 3 by way of streaming for the Daily Compass’s annual conference).  Zen was granted a 100-hour travel visa to Italy and special permission to meet with the pope. Upon reentering the former British colony, he will be required to self-quarantine. Thus, Zen made a considerable effort to speak with Francis, nonetheless he returns home empty-handed.  Apparently, the pope had no time to receive him, and Zen only managed to deliver a letter to Msgr. Gonzalo Aemilius, Francis’s personal secretary.

Obviously no one wants to rock the boat on the eve of the renewal of the much talked about agreement between the Holy See and Beijing for the appointment of China’s Catholic bishops.

The China-Vatican agreement was not the only reason Zen came to Rome. "I came, first and foremost, to discuss the Diocese of Hong Kong, to talk about the naming of its new bishop", Zen said. It might sound strange to place higher priority on the Hong Kong Diocese’s episcopal appointment over the agreement between China and the Holy See, but according to Zen, Hong Kong’s future bishop will play a crucial role in the relationship between China and the Vatican. "I'm worried because there are indications suggesting Msgr. Peter Choi will be the choice and he would be a catastrophe for the Church in Hong Kong. It will spell disaster for decades to come," the cardinal warned while stating Choi is a name very well thought of by the Communist authorities in Beijing.

Last February, the Daily Compass reported on the power struggle for the diocesan episcopal leadership in Hong Kong which has been vacant since January 2019. This is a test of Beijing’s power to retake full control of Hong Kong despite the fact the agreement between China and the United Kingdom provides for the territory’s autonomy according to the "one country, two systems" motto including the fore-mentioned agreement between China and the Holy See. So far nearly two years of stalemate have passed. At first it seemed obvious that the Auxiliary Bishop Joseph Ha Chi-shing would be named Bishop of Hong Kong, but his name was not to Beijing’s liking. Chi-shing showed too much sympathy for the rebellious democratic movement in Hong Kong, despite the heavy backlash from the Chinese Communist Party.

The episcopal nomination was shelved until last February, when news circulated that the choice had fallen back on one of the four diocesan vicars with the nomination of Msgr. Peter Choi Wai-man, but the official announcement was postponed because of the coronavirus. The delay, however, proved useful for Vatican authorities to realise that the appointment of pro-Communist Party Msgr. Choi could create a division in the Church in Hong Kong. Choi’s name was withdrawn resulting in a search for a third person for the appointment.

In recent months, the bishop of Macao, Stephen Lee Bun Sang, was mentioned as a probable candidate for the Hong Kong nomination. But Sang’s name soon lost appeal. According to sources in Rome, it seems certain that Msgr. Choi’s name will make a comeback. There must be very clear signs that Choi as Bishop represents a grave danger, if a very frail Cardinal Zen, barely able to walk, decided fly all the way to Rome to warn the pope. He arrived last Wednesday, managed to deliver his letter to the pope's personal secretary, and then waited for the remaining time in vain.

If Msgr. Choi were to be appointed - apart from the strong negative reactions  which would be expressed by Catholic faithful in Hong Kong,  it would be the ultimate capitulation of the Catholic Church to Chinese political power. It would mean that the "secret" agreement, signed two years ago, actually gives free rein to Beijing’s autocrats. "Good intentions are not enough," said Zen. "You have to understand how things are here, you have to know what the Communists are like.” This is why Zen wanted a private audience with the pope, to explain the situation to Francis and to appeal to him to avert disaster in Hong Kong and the rest of the Church. The appointment of a pro-Beijing bishop, moreover, in a diocese that does not fall within the territory to which the agreement with China applies, would be a tragic signal to the whole world and Catholic faithful alike.

In the meantime, Zen fully expects the "secret" agreement between China and the Holy See to be renewed. "Unless the Chinese Communist Party’s left wing gets what its way, being opposed to any sort of agreement,” Zen said. "Why strike a deal, they think? We are the ones who are really in charge. That’s how they reason."  Zen said, it’s just a different strategy: "The government wanted the agreement to remain secret. This way they can impose anything they want by saying that the pope is also in agreement." So in the end nothing changes. The Chinese Communist Party makes the decisions while the Holy See remains silent.

"I can't even make a fair judgement about the agreement,” Zen said, “because even I don't know what it says. This is incredible. I am a Chinese Cardinal and I am not allowed to know what the Holy See has decided for the Chinese Church." Yet, in reality, when it comes to the Beijing-Vatican agreement, Cardinal Zen has no lack of words. "The agreement concerns the nomination of [Chinese] bishops. Well, in two years, there has been not a single new appointment. On the other hand, under the pretext of the agreement, seven excommunicated bishops have been officially recognized by the Holy See." It goes without saying that there’s been a ratcheting up of anti-Catholic persecution in China, as reported numerous times in the Daily Compass. "The age of the catacombs is back", Zen said in a somber tone.

The retired bishop’s heartfelt appeal intends to avoid a potential tragedy for the entire Church: "Communism is not eternal,” Zen said. “And when it falls we will discover that the Church has collaborated with this brutal regime. The Church will no longer have any moral authority.” According to the Cardinal, it isn’t possible to reach agreements with the Chinese government: "The idea of striking accords with Beijing is insane. It's like trying to make a pact with the devil. There’s no grounds for dialogue whatever the argument.

Cardinal Zen's clear words resound loudly and it is to be hoped they will be heard in the backrooms of Domus Sanctae Marthae, even though the papal door was slammed shut to the Bishop Emeritus of Hong Kong.