The declaration of the Flemish Belgian bishops with their ad hoc liturgy for gay couples contradicts the Church’s teaching on homosexuality and a recent Vatican declaration. It’s necessary for the competent authorities to intervene now so the document is withdrawn and the Belgian bishops to obey. Cardinal Eijk  Archbishop of Utrecht speaks out. 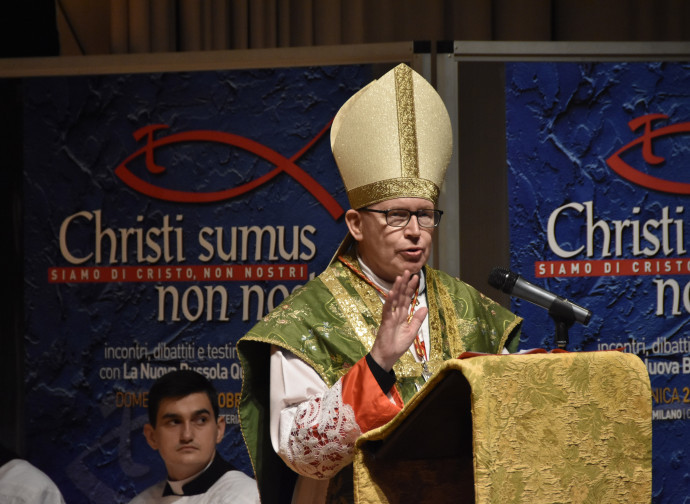 The Belgian Flemish bishops surprised many inside and outside the Church with the statement published on 20 September 2022 entitled: Being pastorally close to homosexual person - For a welcoming Church that excludes no one. For Catholics who accept the Church's teaching, this was not at all a pleasant surprise. Indeed, in the aforementioned declaration, the Flemish bishops offer the possibility of blessing same-sex couples in a lasting, monogamous relationship.

In a statement, they also provide a model for a celebration of the Word and prayer in which the blessing of same-sex couples can take shape. Its outline is as follows:

- Opening Word;
- Opening prayer;
- Scripture reading;
- Expressing the commitment of both parties to each other, manifesting before God their mutual bond; this can be done, for example, in the following terms:

God of love and faithfulness, today we stand before You surrounded by family and friends. We thank You that we have been able to find each other. We want to be there for each other in all circumstances of life. We confidently express that we want to work for each other's happiness, day by day. We pray: grant us the strength to remain faithful to one another and to deepen our commitment. In your closeness we trust, by your Word we want to live, given to each other for good.

God and Father, today we surround N. and N. with our prayers. You know their hearts and the path they will take together from now on. Make their commitment to each other strong and faithful. May their home be filled with understanding, tolerance and care. Let there be room for reconciliation and peace. May the love they share be for them joy and service to our community. Give us the strength to walk with them, together in the footsteps of your Son and strengthened by the Spirit.

This is the first time that a Bishops' Conference (or part of it) has issued a statement giving the example of a celebration of the Word and prayer to pronounce a blessing on a same-sex couple. The Flemish bishops took the remarkable step of allowing the blessing of same-sex couples based on their interpretation of certain passages from Amoris Laetitia (AL), the post-synodal exhortation issued by Pope Francis after both synods on the family in 2014 and 2015 respectively. In it, Pope Francis states, among other things, "that every person, regardless of his or her sexual orientation, is to be respected in his or her dignity and welcomed with respect" (AL 250).

Distinguish, accompany, and integrate remain the main keywords of Amoris Laetitia (chapter VIII), according to the Flemish bishops. It goes without saying that people with a homosexual orientation must also be treated with respect and have a right to pastoral care and guidance (cf. Catechism of the Catholic Church, nos. 2358-2359). By discernment, however, it is meant in Amoris Laetitia that people in an irregular relationship are brought to understand what the truth is about their relationship (AL 300). In short, that they come to understand that their relationship goes against God's order of creation and is therefore morally unacceptable. Integration means giving people in an irregular relationship - as far as possible - a place in the life of the church. Of course, people in a sexual relationship with a person of the same sex are welcome in church celebrations, even if they cannot receive communion or actively participate in the celebration.

The Flemish bishops' statement on the blessing of same-sex couples meets with several inherent objections:

1. Blessings are sacramentals, not sacraments. The Flemish bishops also explicitly state that the blessing of same-sex couples is not a marriage. Sacramentals, on the other hand, are sacred signs that resemble the sacraments in a certain sense and that produce particularly spiritual fruits for the persons receiving the blessing, preparing them to receive the main effect of the sacraments. The sacramentals also sanctify particular situations in life (cf. Congregation for the Doctrine of the Faith, Responsum of the Congregation for the Doctrine of the Faith to a dubium regarding the blessing of same-sex unions, 22 February 2021). The sacramentals are to some extent analogous to the sacraments. The declaration prayer in which same-sex couples commit to each other shows an unequivocal analogy with the 'I do' that a man and a woman say to each other during the marriage ceremony. In it, in fact, the same-sex couple prays: “We want to be there for each other in all the circumstances of life ... grant us the strength to remain faithful to one another and to deepen our commitment". We also find this analogy with the Yes of husband and wife at the marriage ceremony in the community prayer: "Make strong and faithful their commitment to each other." The fear, therefore, is not unfounded: the transition from this blessing to same-sex marriage is not a big step and will be possible in the near future.

2. Blessing does not only presuppose a good intention on the part of the recipient. What is blessed must also correspond to God's order of creation. God created marriage as a total and mutual gift of man and woman to each other, culminating in procreation (Gaudium et spes, no. 48; cf. no. 50). Sexual relations between persons of the same sex cannot in themselves lead to procreation. They cannot therefore be an authentic expression at the bodily level of the total mutual self-giving of man and woman, which marriage is essentially. Situations that are objectively wrong from a moral point of view cannot be blessed. God's grace does not shine on the path of sin. One cannot cultivate spiritual fruit by blessing relationships that go against God's order of creation (ibid.). This, of course, does not prevent homosexual individuals from receiving a blessing. However, it is not morally permissible to bless the homosexual relationship as such.

5. If gay couples in monogamous, lasting sexual relationships can receive a blessing, should not the same be possible in the monogamous, lasting sexual relationships of a man and a woman living together without being married? Allowing the blessing of gay couples carries the great risk of devaluing blessings and undermining the Church's teaching on the morality of marriage and sexual ethics.

The statement of the Flemish bishops, in which they allow the blessing of same-sex couples and even provide a liturgical model for it, meets with inherent ethical objections, radically contradicts a recent ruling by the Congregation for the Doctrine of the Faith, and carries the risk that it may lead Catholics to views on the morality of same-sex relationships that are contrary to Church teaching. Catholics who accept the Church's teaching, including on sexual morality, therefore fervently hope that the Flemish bishops will soon be asked by ecclesiastically competent circles to withdraw their statement and that the latter will comply.