Caravaggio’s Nativity, a masterpiece stolen by the mafia

On the night between 17 and 18 October 1969, a magnificent Nativity painted by Caravaggio was stolen from the Oratory of San Lorenzo in Palermo. Despite the efforts of investigators, who took statements from various mafia defectors, all trace of the painting (estimated value €35 million) has been lost. The painting, depicting the birth of Jesus, impresses with its realism.
- THE RECIPE: STUFFED CAPON MILANESE STYLE 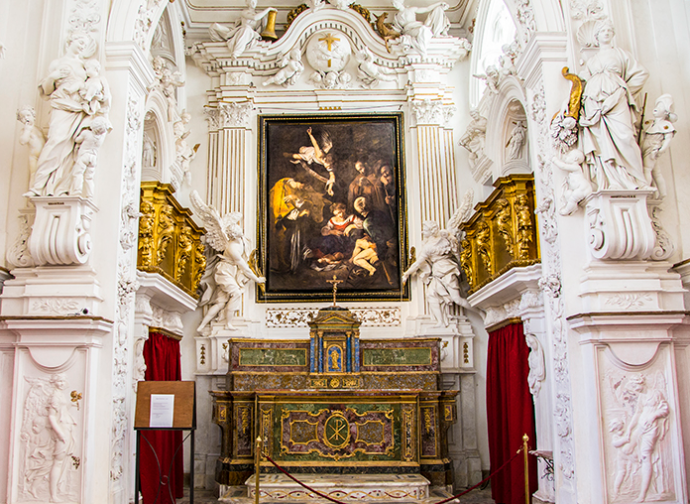 Darkness enveloped the small church and the silence made his ears ache. The man directed the small beam of light produced by his pocket torch, searching the paintings hanging on the wall. He must make no mistake, the mafia boss had been clear. He had to remove the canvas and leave the frame in place, so they might not notice immediately. He took a folded sheet of paper out of his pocket and studied it. He swept his eyes over the paintings and then saw it. Fortunately it was at a height that did not require a ladder. He took the box cutter out of his pocket. He had sharpened it that afternoon to make sure he could perform the operation rapidly. He pierced the canvas with it and it seemed to him that the laceration had provoked a moan. The boss had been adamant that he should cut it as close to the edge as possible, so as not to damage and waste too much canvas. He cursed under his breath: it was not easy. He cut his finger in the process, but took little heed of it.

Finally he managed to detach the canvas, rolled it up as he had been told to do, and put it under his jacket in case he met someone. Even though, at that time of night, everyone was asleep. He went outside, leaned against the outer wall of the church and lit a cigarette. He had been afraid. He walked to his car, started it up and drove off into the night. He would deliver the canvas and his debt would be cleared. 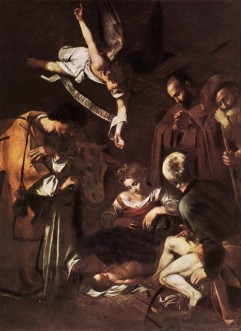 It was the night of 17 October 1969, the church was the Oratory of San Lorenzo in Palermo and the thief was a young man working for one of Sicily's mafia families. The painting was the magnificent Nativity with Saints Lawrence and Francis of Assisi by Caravaggio. It would never be found again. On the morning of 18 October 1969, it was the custodians of the Oratory who realised that the painting had been stolen and found a huge hole in an empty frame. The painting had been cut very roughly and fragments of coloured canvas were hanging here and there from the empty frame. From that moment on there was no trace of it. It disappeared into thin air, but appeared in the various discordant testimonies that mafia defectors later gave.

One of them, Vincenzo La Piana, nephew of the boss Gerlando Alberti, stated that, after several attempts to sell it had failed, probably due to the precarious condition of the painting, it had been buried by his uncle in the Palermo countryside, together with heroin and a large quantity of US dollars. But in the place indicated by the turncoat, the iron box with the canvas was not found. Later, the collaborator of justice Francesco Marino Mannoia declared to anti-mafia judge Giovanni Falcone (who was assassinated by the mafia in 1992) that he was one of the perpetrators of the theft and that, in detaching the canvas and rolling it up, it was irreparably damaged. This was followed by the destruction of the painting. However, the Carabinieri's Artistic Heritage Protection Unit ascertained that the theft referred to by Mannoia concerned another painting, attributed to Vincenzo da Pavia and located in an adjacent church. In 1996, Giovanni Brusca reported that the painting would be returned in exchange for a reduction in the application of Article 41-bis. The Italian State refused the offer. Another informer, Salvatore Cancemi, stated that the Nativity would be exhibited during some meetings of the mafia 'Cupola' as a symbol of power and prestige.

New information on the painting's fate arrived on 9 December 2009, when during a deposition in court, the mafia informer Gaspare Spatuzza reported that the Nativity had been entrusted to the Pullarà family (mafia bosses of the Santa Maria del Gesù district) in the 1980s. The Pullarà family allegedly hid the painting in a stable outside the city, where, without protection, it was gnawed by rats and pigs. The remains of the painting were then burnt. In 2017, mobster Gaetano Grado alleged that the painting was hidden abroad: in 1970, boss Gaetano Badalamenti allegedly transferred it to Switzerland in exchange for a considerable sum of francs to a Swiss antiques dealer, who had come to Palermo to finalise the deal. Grado also reported that Badalamenti had told him that the painting had been taken apart to be sold on the underground market. The story, as reconstructed by the new investigations relaunched by the Anti-mafia Parliamentary Commission of the XVII legislature, is told in detail by Riccardo Lo Verso in his book "La tela dei boss" (2018) and then, with further unpublished details, by Michele Cuppone in the volume "Caravaggio. La Natività di Palermo. Nascita e scomparsa di un capolavoro” (2020).

In addition to the declarations of mafia defectors, another piece of news came in 1980 from the British historian and journalist Peter Watson, who declared that in Laviano, in the province of Salerno, he had contact with an art dealer who offered him the Nativity. The meeting with the fence, scheduled for the evening of 23 November, coincided with the great earthquake that devastated the region and therefore never took place. The Carabinieri unit, set up that year to track down stolen works, continues to search for the painting today. It is one of the most wanted paintings in the world by law enforcement agencies. The FBI has included the painting in its 'Top Ten Crimes' list of the world's ten most important art theft cases, attributing to it a market value of approximately €35 million.

Despite the efforts of the Italian authorities, all trace of the painting was lost in the early 1980s. Investigators first learned the names of the thieves and the mafia family responsible for hiding it, but a war between mafia families would later make all trace of the work lost. Despite conflicting statements about the painting's destruction, Italian police in 2017 said their search efforts were still ongoing.

Unable to find the original, the Italian authorities are working to make up for its absence: in 2015, a vast art and technology project saw the light of day when an ultra-detailed digital reproduction of the painting was unveiled to the public, displayed exactly where the original had disappeared from. In 2016, a filmed documentary entitled 'Operation Caravaggio' was released, telling the story of the painting and its modern copy.

The canvas tells the story of the birth of Christ and impresses with its realism. As always in Caravaggio's works, the saints and Madonnas have the features of the marginalised, of the poor, whom he had become so familiar with during his peregrination to escape justice. Accused of murder, the artist escaped and tried to cover his tracks. The canvas we are talking about was finished in 1609 in Palermo, the city where Caravaggio had taken refuge in his desperate attempt to escape arrest. A year later, the great artist died. We can therefore date the work among those executed in the final part of his life, although recent studies claim that this canvas was begun in 1600.

In the Palermo Nativity, each character has a spontaneous attitude: Saint Joseph, whose back is turned to us and who is wrapped in a curious green cloak, appears young. The presence of St Francis is certainly a tribute to the Oratory, which at that time had passed to the Venerabile Compagnia devoted to him, established as early as 1569. In the painting, the figure of the Madonna is striking. The artist depicts her in the guise of an ordinary woman. She has an extremely melancholic appearance, and perhaps already presages the end of her Son, who is placed on a small bed of straw, from where he contemplates the world around him. The head of the ox is clearly visible, while the donkey can barely be glimpsed. Finally, right above the child is a gliding angel, the symbol of divine glory.

Caravaggio (born Michelangelo Merisi, Milan 1571 - Porto Ercole 1610) spent a very intense year in Sicily, where he stayed from October 1608 to October 1609. He influenced many great painters after him, which is confirmed by the emergence of Caravaggioism. He had a resounding success. At the beginning of the 17th century, working in an environment of rich and cultured patrons, he obtained prestigious commissions, and high-ranking collectors sought out his paintings. But then Caravaggio entered a difficult period. In 1606, after numerous disputes with the justice of the Papal State, he wounded an opponent to death during a duel. He had to leave Rome and spent the rest of his life in exile, in Naples, Malta and Sicily. Until 1610, the year of his death at the age of 38, his paintings were partly intended to redeem this guilt.

However, some biographical elements relating to his habits are now being revised, because recent historical research questions the unflattering portrait that was long propagated by 17th century sources and on which we can no longer rely. With his paintings, Caravaggio brought the divine figures closer to the human heart, just as he did with the Nativity we have analysed here. We must all pray that the original canvas is found and returned to the Oratory of San Lorenzo. So that justice may be done.