Captain Tom, the centenarian who rallied the United Kingdom

War veteran Tom Moore turns 100 today, and the United Kingdom is paying him homage with nation-wide celebrations. The images of him, almost centenarian, walking 2.5 km around his back garden bent over a walker to collect money to fight Covid-19 travelled the world. His original goal was to raise a thousand pounds, instead collected 30 million. It’s a phenomenon that can only be explained as a hymn to life and hope, this what Captain Tom personifies. 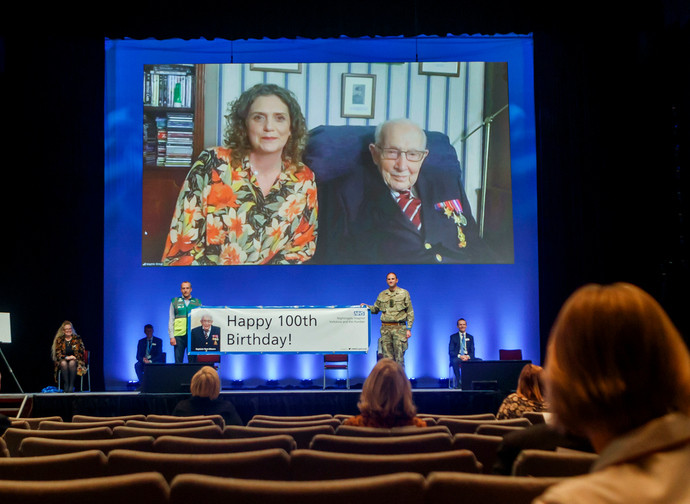 Vladimir Ilyich Lenin’s comment, “There are decades where nothing happens; and there are some weeks where decades happen” couldn’t be more apt in this case. The news that Queen Elizabeth’s 94th traditional birthday celebrations in mid-April were cancelled due to the pandemic was unexpectedly usurped by new headlines; the nation has found a hero and birthday celebrations are back on. The party’s today April 30, and everyone is invited (in full respect of government restrictions). Captain Tom Moore is a 100 years old and the UK can’t get enough of him. Tributes are pouring in from around the globe and the concentrated arrival of over a hundred thousand birthday cards clogged the postal service in his area.

It’s been love at first sight since April 6, when Captain Tom a 99 year old, joined the fund raising fight against Covid-19. The challenge to complete 2.5km by walking 100 laps of his garden in time for his 100th birthday, aimed to raise £1000 for the National Health Service (NHS). Who can forget those powerful news clips which held the headlines for weeks of 99-year-old Tom, bent over his frame walking round his garden. Each steady pace taken with the determination of a counter attack to the advance of the virus.

The world held its breath watching his target £1000 be revised multiple times to top  £12million as he crossed the finishing line and climb to a staggering £30 million (latest figure on publication). A veteran of the Second World War, he hasn’t stopped fighting for a better world and he’s rallied an army of generous supporters to join forces.  As he turned the final corner his last steps took him past a military guard of honour and you could almost hear a revised version of Churchill’s wartime declaration: ‘we shall defend our island, whatever the cost, we shall fight, be it in the garden or be it in the yard, we shall fight this virus, but we shall never surrender’.

Tom Moore’s story has made him a national hero and multiple record breaker: £30m, most raised by an individual fundraiser on JustGiving, an association of charities that provide financial support to the National Health Service (NHS). First, 100-year-old to reach Number 1 in the UK music charts with ‘You’ll Never Walk Alone’ singing alongside Michael Ball and The NHS Voices of Care Choir. Both achievements have earned him places in the Guinness World Records. First commoner to open a NHS Nightingale Hospital (temporary hospitals set up by NHS England to treat coronavirus patients); Nightingale hospitals have been officially opened by Prince William future heir to the throne and his uncle Prince Edward. First citizen to have their birthday marked with an RAF flypast. A special postmark has been dedicated to him in his honour and a new intercity express train has been named after him and put in service specially today for his birthday.

But the question many are asking is how did a simple sponsored walk in a back garden for charity turn in to a global cause and raise tens of millions of pounds?  What is it about Tom that has hooked the world in a clutch they themselves don’t want to loosen?

The altruistic feat, by someone in the ‘vulnerable category’, has deservedly made Tom a social media hero with a difference. Tom’s magic touch is his capacity to install hope in people. Hope is the single indispensable ingredient needed to invest in the future and makes the mystery of life worth living and dying for. As Steve Jobs said, the biggest trial we face in life is coming to terms with death, “no one wants to die and even those who want to go to heaven don’t want to die to get there”. Covid-19 has rubbed our noses in the question of death and Tom has chosen to celebrate life and has become its symbol.

Once again the younger generation are back to looking up to the older generation again. Tom has made people rethink about the elderly. Tom’s feat begs new answers to old questions. What is it that makes a life worthy of life? We have tied the value of life to productivity and its transcendental nature has been removed from life’s equation. Those who are no-longer productive or no-longer self sufficient, or disabled, have been pushed to the bottom of the scale of what’s counted as valuable and the decision if a life is worth living is delegated to the scale of convenience and utility. This is the philosophy our youth have grown up with, this is the stumbling block the modern society trips over.

Tom has made us see life from a different perspective. Those elderly often considered beyond their expiry date and often left last in the queue for health treatment are the ones who paid for our democratic freedom with their own blood. They toiled through the years of deprivation and sacrifice to rebuild a world destroyed by war. They deserve our recognition and gratefulness. But above all hidden and invisible inside those consumed and withered bodies collectively referred to as the elderly lies a priceless soul created for eternity. It’s that cynical attitude that ties value to utility which is stealing the very hope Tom transmits.

To avoid Tom’s ‘finest hour’ becoming another historical event, a momentary distraction from the gloom, our yearning for hope necessitates an answer. It is no coincidence that Tom’s story is set in an ‘old’ European country, because it is in Europe’s Christian roots that we find the hope that built the best of European civilization. And it is to those roots that Captain Tom, whether he realises it or not, is calling us back. Happy birthday Captain Tom.