Christian nations are under fire. Guillotine fantasies are sprouting everywhere in Brussels. Is the Slovenian Prime Minister proposing to restore the EU's original values and preserve national autonomy? Is this why, accusations of authoritarianism are immediately levelled against him? Orban's Hungary and conservative Poland are under harsh attack, the former especially over its anti-pedophilia legislation. 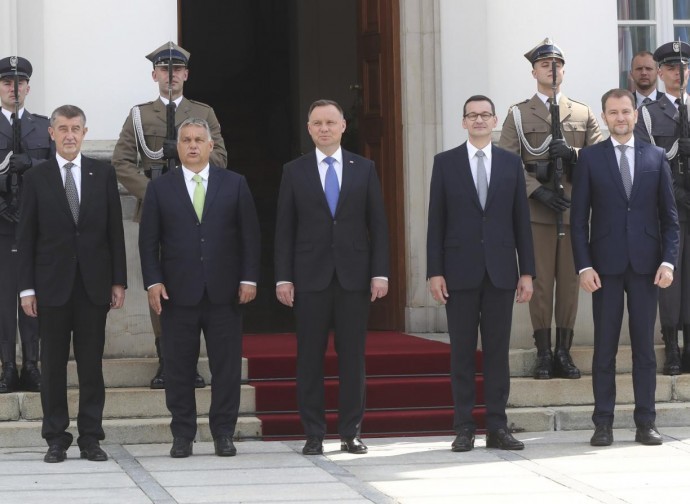 Christian nations are under fire. Guillotine fantasies are sprouting up all over Brussels. Last Tuesday, July 6,  the Slovenian Prime Minister presented his six-month priorities in which he says he will lead Europe back to time-honored traditions, saying: "For us Slovenians, the return to Europe coincided with a return to the values of democracy and freedom...Today the EU is different from the one we entered into....We must return to a long-term vision, going back to the values of our founding fathers and creating a Europe that is at peace with itself, .. to the transparent and comprehensible criteria for all citizens of the rule of law (protecting human rights and freedom of expression) ... to the dignity of each individual from which fundamental human rights derive...We must understand that if we talk about the rule of law, it is the independent national systems that must decide what is right and what is wrong, not political majorities. The independence of the judiciary is necessary, as is the freedom of the media should have in the battle against 'fake news'... All this will be discussed on 23 August, during the Conference on the Memory of Totalitarianism in Europe."

Socialists, Liberals, Greens and Leftists, whose sister Slovenian parties are all allied in opposition, wasted no time accusing Prime Minister Jansa and his government of wanting to influence the freedom of the press and the judiciary system. They urged him to address and resolve issues and criteria on the "rule of law." At the press conference that followed the debate, Jansa once again spoke about European values and the rule of law, pointing out that "there are very clear values in the Lisbon Treaty and equally clear mechanisms for verification and sanction, by independent bodies, for countries that violate these values." In the end, there was clarity and firmness, but yesterday's parliamentary debates on the European Council and later on the rule of law in Hungary and Poland demonstrated  the Commission, the Council Presidency and Parliament’s disturbing animosity. In the first debate, instead of presenting decisions and assessments of the Council's meeting on immigration, Russia, Turkey and the common market, both Ms. Ursula von der Leyen and Mr. Charles Michel used the platform to attack Orban's Hungary on its anti-pedophilia laws without showing any institutional respect for him and his nation. The Socialists, Liberals, Leftists and Greens all agreed, while the Popular Party talked up relations with Russia. Only Identity Group Parties and Conservatives denounced the shame of a debate on the Council that was all about Hungary's anti-pedophilia law.

Later in the day, the debate on the "rule of law in Hungary and Poland" was yet another stage for Commissioner Vera Jurova to show her deep disdain for both countries: "We are assessing, but we will not hesitate to intervene." she said. "What the Commission stated all day yesterday is false: there is no such thing as a violation of Article 21 of the Nice Charter. In the entire Charter and in this article 'non-discrimination' is related only to: ..sex, race, colour, ethnic or social origin, genetic features, language, religion or belief, political or any other opinion, membership of a national minority, property, birth, disability, age or sexual orientation." Sexual orientation is quite different from the doctrines on gender identity and sexual orientation as stated by the EU Commission.

Over the last couple of days, Orban and Hungary have been subjected not only to the institutional fury of Brussels, but also to attacks by the media and the Council of Europe. On Monday 5 July, European newspapers published excerpts from the latest Journalists Without Borders Report which defined Orban, together with heads of state with whom all of Europe has been doing business for decades, as press freedom "predators." It is too bad that the directors of the operation are very clear about their financiers:  the Swedish Agency for Foreign Affairs, the Ministry of Foreign Affairs and many French government cultural agencies, the British Department for Foreign Development, the Ford Foundation and George Soros' Open Society Foundation, which supports the journalists' organisation with hundreds of thousands of euros in grants each year. After the Hungarian Minister of Justice, Judit Varga, unveiled the mystery, on Tuesday July 6, the Hungarian press reported the "Opinion" of the Venice Commission (the Council of Europe's international body that guarantees states "constitutional support") on the constitutional reforms approved last December, most of which was related to "family, marriage, male and female parents and the biological sexuality of persons." The 'Opinion'’s text was approved on July 2 and 3, while recognising national competence in the areas of family, education and child protection but criticising the fact that there has been no public consultation, no involvement of opposition parties and warning of potential European Convention on Human Rights violations. The conspiracy is now quite obvious: if the constitutional definitions of parenthood, biological sex, etc. were contrary to the European Charter,  European sanctions would be green-lighted against Hungary for violations of values and non-discrimination.

In Poland, the return of Donald Tusk to the Civic Platform Party leadership last weekend already anticipated the intolerable threats that were felt in Brussels recently. Tusk, the former Polish Prime Minister and former European Council President, first ranted against the signatories of the "Declaration for the Future of Europe", claiming the text was a great gift to Putin. He spoke strongly against Poland's governing PIS, calling it "the evil” of the nation. Then, on July 6, Tusk pleaded for a "non-aggression pact" between all opposition forces, from the LGBTI party to the extreme left, calling for one big alliance of hatred towards the ruling PIS party and the Kaczyński brothers.

The current European Union institutional representatives, as well as those of the recent past, hate governments, peoples and Christian cultures that oppose the unified LGBTI doctrine and are animated by a blind fury never seen before. They demand sacrifices to be made with Polish, Hungarian, Slovenian blood... This sinister news appeared on that pages of Italy's Repubblica and Spain's El Pais newspapers. This is chilling excitement for those waiting for their heads to fill the executioner's basket.