Biden, the "devoted" president, but to abortion

The American president, who professes to be a "devout Catholic", has promised to do everything in his power to guarantee abortion in the United States. He is calling Dem voters to the polls, "saddened" by the Supreme Court ruling, but is also worried about the midterm elections.The Fox News columnist, Miranda Devine, speaks to the Daily Compass. 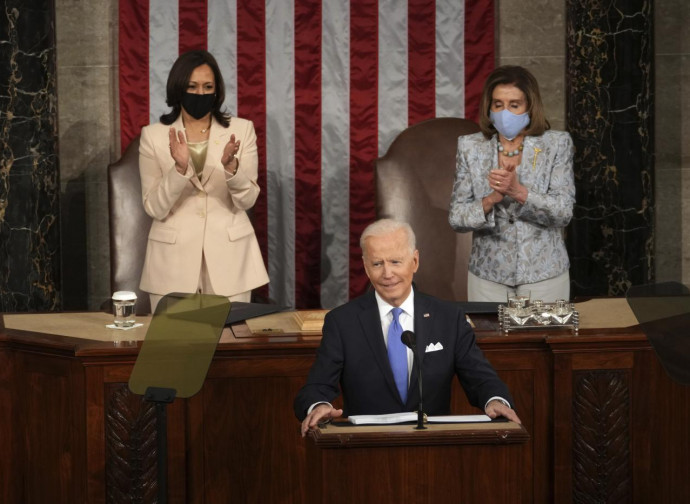 On the subject of the US Supreme Court ruling on abortion and the muddled reactions of President Joe Biden and the Democrats, the Daily Compass spoke to Miranda Devine. She is one of the best known figures in the conservative world of the United States and Australia. She is a columnist for the New York Post and a Fox News columnist.

Both Biden and Pelosi profess to be 'Devout Catholics'. Would you say there is a contradiction between their declared faith and their reactions to SCOTUS’ overruling of Roe v. Wade?
Both Biden and Pelosi are fake “devout Catholics”. They are religious hypocrites who ostentatiously parade their faith while acting as America’s most senior abortion activists. No devout Catholic would support abortion, which is a mortal sin, let alone enthusiastically agitate for abortion until the moment of birth, which is the Democrat position.
It was a “sad day” and “a tragic error,” said Biden, after the Supreme Court in June returned the issue of abortion to states to decide. He vowed to “do everything in my power” to preserve abortion.
Pelosi described herself as "a devout Catholic and mother of five in six years” and said abortion is” an issue of fairness and justice for poorer women in our country … the right thing to do."
While Biden still is welcome to take communion at his home state of Delaware, in Pelosi’s hometown of San Francisco, Archbishop Salvatore Cordileone rebuked Pelosi over her vocal support for abortion, and declared she would be denied Communion.
"To use the smokescreen of abortion as an issue of health and fairness to poor women is the epitome of hypocrisy: What about the health of the baby being killed?" he told Catholic News Agency. "What about giving poor women real choice, so they are supported in choosing life?"
The real "devout Catholics" are the "people of faith who run pro-life crisis pregnancy clinics; they are the only ones who provide poor women life-giving alternatives to having their babies killed in their wombs."

How might Roe v. Wade influence midterm elections?
Democrats hope it will be a game-changer for them because they are facing a shellacking in the midterms with voters reeling from soaring gas prices, spiralling inflation, a faltering economy, a record surge in illegal migration, bungled foreign policy and Biden’s shaky performance.
They hope abortion will activate apathetic supporters and take the spotlight away from the pocketbook issues which top voter concerns. But it may not be as helpful as they hope because the lies they tell themselves and their supporters have caused them to lose touch with the reality of America.

Is it true that most Americans support abortion?
Polls show almost nine in 10 Americans oppose Biden and Pelosi’s extreme position of abortion on demand until birth.
A Trafalgar Group poll in May showed less than 12% of Americans support abortions to birth, while 57% believe abortions should be banned once an unborn baby’s heartbeat can be detected at about six weeks. Even among Democrats, only 19% think that abortion should be legal until birth.
A Fox News poll found 54% of voters supported state laws banning abortion at 15 weeks, such as in Mississippi, where the Supreme Court case originated.
Biden claims America has become an outlier on abortion compared to the rest of the world since the Supreme Court overturned the 1973 abortion rights case of Roe v Wade. But that is not correct. It actually was an outlier before the case was overturned, since only five other countries — including China and North Korea — allow abortion until the moment of birth.

Pro-choice activists have attacked Pregnancy Help Centers, SCOTUS justices have been threatened for their lawful decisions; main streets have been blocked: do you think statements by Dem Leaders are fuelling the flames of riot?
Yes. From Biden on down they refuse to condemn the attempted assassination of Supreme Court Justice Brett Kavanaugh at his home, refuse to condemn protesters who forced him to flee a Washington restaurant, refuse to condemn racist attacks on Justice Clarence Thomas, refuse to treat seriously terrorist firebombing and vandalism of churches and Pregnancy Help Centers, and refuse to enforce the law banning protests outside the homes of the Supreme Court justices.  Collectively they raise the temperature on an already volatile situation with fiery rhetoric.

Are the protests following the Supreme Court's decision more or less dangerous than the January 6 Capitol Hill protest?
They are more sustained and dispersed. The Capitol riot lasted about four hours. The abortion protests have been going for weeks and included an attempted assassination at the home of one judge which involved guns and knives, the firebombing of churches and Pregnancy Help Centers and escalating violent death threats from a domestic terrorist group.

What does the Supreme Court decision teach the pro-life movement?
Be patient.