Bianchi and the Bose Community, the real scandal is not having stopped him earlier

Everyone wonders what happened inside the Bose Community (Northern Italy) to cause the Holy See to intervene so heavily. But the real question should be why the Holy See has allowed Enzo Bianchi's heterodox theses to circulate inside the Church all over the world for so many years. And why a dosssier of 2004 in the Vatican has been covered up. 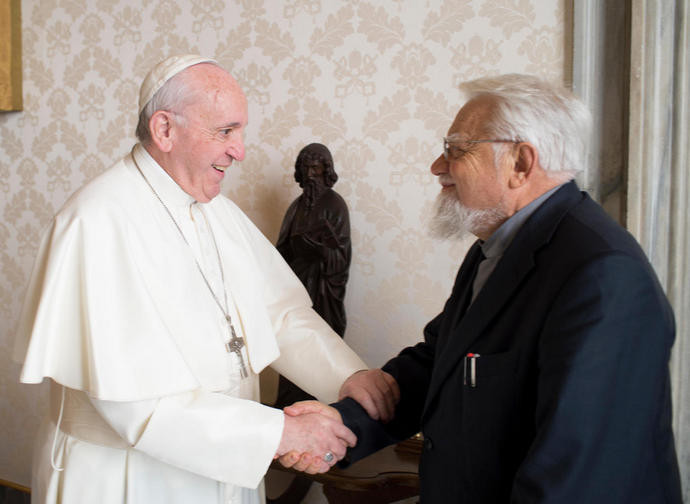 It is not yet clear what the real problems were which led to the removal of Enzo Bianchi, together with Goffredo Boselli and Antonella Casiraghi, from the Bose Community. Officially, there is talk of tensions between them and the current prior, Luciano Manicardi, as well as with the rest of the community. Internal conflict though, hardly justifies them receiving such a stiff penalty. While it is curious that interventions are now being made by the Holy See and garnering so much attention, we should be rather wondering why it did not intervene much earlier regarding Bianchi's "preaching" and his heterodox theses which have received great support among many bishops.

In fact, someone in Rome knew enough to file a report. There is a dossier on Bianchi at the Congregation for the Doctrine of the Faith dating back to 2004. Yet, some important prelate, a friend of the community’s founder, took steps to stop the investigation and cover up the contents.

In any case, there are no particular secrets, due to Enzo Bianchi immense amount of writings available to the public. His writings have been repeatedly subject to harsh criticism from the Nuova Bussola Quotidiana.  The points to be addressed are many, but let's examine some of them.

To begin with, there is, indeed, a serious problem with the very substance of Bianchi's theses, especially from an ecclesiological perspective. He writes: “Brother, sister, you come from a Christian church. [...] You belong to Christ through the particular church into which you were born through baptism. You will, therefore, recognize your own pastors. You will acknowledge the Church’s ministers in terms of their ecclesial diversity, and you will always try to be a sign of unity.” This is the tenor of the “Rule of Bose” as penned by the community’s founder Enzo Bianchi. Its significance is already well understood, yet revealed more clearly in the light of a statement made in his book The Bose Monastic Community: “Only the universal Church, in its historical fullness, can address the totality of witness contained in [the Gospel].”

The unspecified "universal church" seems to be the horizon towards which we should all proceed. It is the same objective which, at least in some way, the Bose Community is already eager to obtain. However, it is a much larger Church than the Catholic one, one in which everyone remains "faithful" to their own church or community from which they come and while at the same time recognizing their own ministers and pastors. According to the Rule of Bose, it is recommended that "within the community it is good that there are also other brother pastors or priests, not only because they ensure sacramental ministry is available to the community, but also because they represent their own connections between various communities and churches.”

These indications are in net contrast with what the Catholic faith teaches, as it clearly appears in section 1 of the Congregation for the Doctrine of the Faith’s Mysterium Ecclesiae (1973) which is echoed in section 17 of Dominus Iesus (2000): “The Christian faithful are therefore not permitted to imagine that the Church of Christ is nothing more than a collection — divided, yet in some way one — of Churches and ecclesial communities; nor are they free to hold that today the Church of Christ nowhere really exists, and must be considered only as a goal which all Churches and ecclesial communities must strive to reach.”  However, in Bianchi’s 1999 book Ricominciare nell’anima, nella chiesa, nel mondo ( “Starting over Inside the Soul, Church, and the World”), he maintains the ecclesiological opposite point of view: "We are overlooking the fact that every tradition is limited and partial and that only, when seen together in their entirety, is it  possible to obtain the fullness of the truth.”

We are, thus, faced with a fundamental problem relating to the uniqueness and unity of the Church of Christ, elements which are strictly n connection with the unicity and universality of the salvific mediation of Jesus Christ " (DI, 16) and that " this Church, constituted and organized as a society in the present world, subsists in [subsistit in] the Catholic Church, governed by the Successor of Peter and by the Bishops in communion with him.” (Ibid.). The elements of truth and sanctification present in Christian churches and communities strive, by their nature, towards this unity: this is affirmed, for example, in the history of the many conversions that have occurred from Protestantism and Anglicanism to Catholicism.

If these elements direct and attract believers towards the one true Church of Christ, the Roman Catholic Church, Enzo Bianchi slows and even thwarts this momentum. He does so, firstly, by recommending believers to remain faithful members of their own respective churches and, secondly, by referring to a wider, more universal church than the Catholic Church. Bianchi is fervent in his criticisms when “preaching” in major  newspapers.

Indeed, according to Bianchi, authentic evangelization "requires vigilance against any temptation to weigh down (so it seems) the Church’s sole mediation [...] Only, in this way, will the Church avoid arousing suspicions that it caters only to one particular ecclesial community rather than encountering all men of God for their conversion and faith.”

Enzo Bianchi speaks about the Catholic Church as somewhat problematic in that it wants to make proselytes to achieve its own aims. Yet he forgets that ecclesial mediation is not only explicitly desired, but was the real expression of Christ's own mediation and that His Church is an extension of His Incarnation. As section 16 of Dominus Iesus explains very clearly, “The Lord Jesus, the only Saviour, did not only establish a simple community of disciples, but constituted the Church as a salvific mystery: he himself is in the Church and the Church is in him. Therefore, the fullness of Christ's salvific mystery belongs also to the Church, inseparably united to her Lord. Indeed, Jesus Christ continues his presence and his work of salvation in the Church and by means of the Church which is his body. And thus, just as the head and members of a living body, though not identical, are inseparable, so too Christ and the Church can neither be confused nor separated, and constitute a single ‘whole Christ.’”

Another ecclesiological issue has to do with “divergence,” which indeed leads to a form of dualism in terms of the Catholic Church and the Kingdom of God. In Ricominciare nell’anima, nella chiesa, nel mondo, Bianchi wrote that "the Church is not the Kingdom." He then sets out to describe how he would like "his" church to be. However, in section 5 of Lumen Gentium, we learn that the Church militant on this earth “constitutes the seed and the beginning of the Kingdom” which is fully expressed in the Church triumphant. Indeed, there are not two churches, but one Church which is the Kingdom of God. It begins here on earth and reaches its perfection in eternity. Section 18 of Dominus Iesus reiterates what Vatican Council II taught, namely, that the Catholic Church is “therefore the kingdom of Christ already present in mystery and constitutes its seed and beginning. The kingdom of God, in fact, has an eschatological dimension: it is a reality present in time, but its full realization will arrive only with the completion or fulfillment of history.”

It goes without saying that according to this ecclesiological framework, Bianchi's ecumenism is consistently unacceptable. In monasticism and ecumenism, he believes that it is right of "Bose" monasticism to bring about "true unity", but not through a witness of one tradition lived, prayed, communicated together, but through many by overcoming specific confessional differences, obviously including Catholic differences: "Ridding oneself of non-essential confessional wealth for following of Christ" is one sure way forward for returning to a Gospel sine glossa, which his capable of leading to a commonly sought universal church. This is the obvious corollary for why we cannot retrace one true Church of Christ on this earth.”

It would, therefore, be desirable that Bianchi's removal from the Bose Community is the first step to drain other unhealthy swamps present in Christianity. It must be demonstrated that the the Catholic Church is not just one way of encountering Christ; that the Catholic Church is not just a partial expression of the Church willed by Christ; that the Kingdom of God is not just something to hope for or to be built with our own efforts; and that all Christian faiths are not just a mere common "heritage" of our parishes and ecclesial associations. May these heterodox ideas be removed as soon as possible from our Church, just like the ex-prior of the Bose Community.