If the French bishops had read the best fairy tales, they would never have made the fatal mistake of asking the "dragon's" allies to "help" them eradicate the scourge of child abuse. Priests in confession are not conducting a profession, but are part of a sacrament. To betray the Seal of Confession means to betray the sacrament and to betray the sacrament means to betray Christ Himself. Of course, the Church has few weapons to defend her libertas, but she still has martyrdom. Benedict XVI pointed to Saint Anselmo as an example. 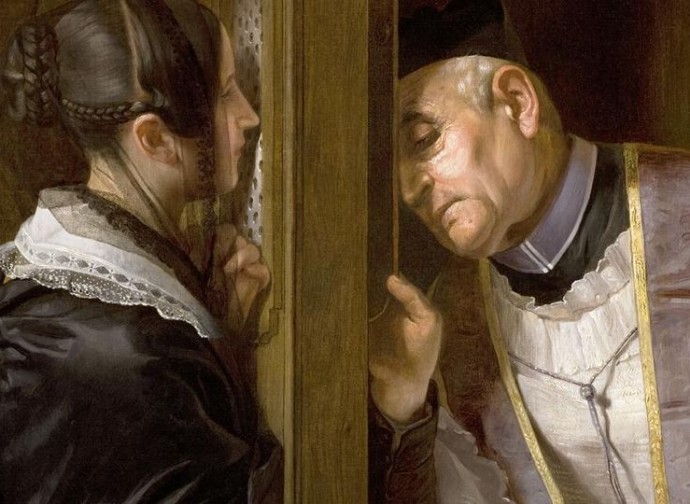 As the writer Michael O'Brien says, in ancient fairy tales "dragons had to be kept at bay and the hero was the one who managed to kill them". Entire generations have learned that "dragons cannot be tamed and attempting to dialogue with them is fatal." Today's stories, on the other hand, are "in favour of defending dragons’ civil rights" and describe how we can engage in dialogue and collaborate with them. But the truth is, dragons cannot be tamed; if they do offer what appears to be a conciliatory paw, it means that they are simply trying to snare you in their clutches and instantly devour you, when you least expect it.

So, if the French bishops had read the best fairy tales, the ones where dragons are the enemy to defeat and to be wary of, they would never have made the fatal mistake of asking the dragon's allies to "help" them eradicate the plague of child abuse. Instead, facilitated by such unbelievable naivety, its allies have created a narrative that slings mud at the Church; they have then proceeded to give "advice" and finally roared that priests should report what they hear in Confession (see here). And they intend to go on.

Therefore, it is necessary to understand what is at stake concerning the Sacramental Seal. No one should make the mistake of thinking that this is a matter of protecting the penitent's privacy or observing a professional secret. It goes without saying, that an alleged common good will always be considered before personal law.

But, after almost two years of pandemic, the watchword has become justification and it has been imposed on every area of ​​human life. The bonum poenitentis is certainly part of the sacramental seal and is therefore beyond discussion. But, here even the primacy of divine law and the consequent freedom of the Church are in question. The priest, as well as "the interpreter, if there is one, and all the others who in any way have knowledge of sins from confession are also obliged to observe secrecy" (can. 983 § 2), are not making a profession and are not even just trusted friends. They are part of a sacrament, in which it is Christ who hears confession and it is Christ who absolves, through the person of his minister. To betray the secret therefore means to betray the sacrament, and to betray the sacrament is to betray Christ Himself. This is the most profound logic according to which "the sacramental seal is inviolable" (can. 983 §1).

As we can’t expect an atheist and secular state to comprehend this language and even less to accept it, they need to be told to accept it. The spiritual power of the Church does not have to seek permission from the temporal power in order to be exercised. The Church is free and sovereign in her own right: she does not have to wait for authorisation from the State to do what Christ, the Son of God - and not just any head of state - has ordered her to do. The Church is not free as "in a free state", insofar as, the state allows it to be such; she is free because she receives her potestas from Christ Himself.

Some might object by saying that the Pope has only a few divisions to defend the libertas Ecclesiae, just to take a cue from Stalin's famous scornful question, and it’s true. But she still has martyrdom, which from the point of view of the faith is the greatest force to overcome any persecution. There has never been a century in history, when somewhere, the Church has not suffered persecution at the hands of those who believe they have absolute power, to which everyone must submit. We are living during the latest, universal and most serious attack against the freedom of the Church and the sovereignty of Christ. The Christian response is always the same: "We must obey God rather than men" (Acts 5:29), whatever the price to be paid, whatever such a choice may cost or whatever the consensus.

In the memorable Epistle 210, written to Pope Paschal II between the end of 1099 and the beginning of 1100, Sant'Anselmo describes the agonising situation that will lead to his exile: "I observed many abuses in Anglia, and it was my duty to correct them. However, I could neither correct them nor, without incurring sin, tolerate them. In effect, the king required that, under the semblance of justice, I give my assent to his wishes, which were in contrast with the law and with divine will ”. Anselmo describes the arrogance of William Rufus (William II king of England), who did not admit that the Church, in his territory, was free to receive papal legates, celebrate councils, obey directives that were not welcome to his Majesty. The other English bishops, as reported by Eadmero of Canterbury, author of Vita Anselmi, abandoned him, preferring conciliation with the King, because "impeded by our relatives, whom we maintain, and by the many realities of the world, which we love".

The straw that broke the camel's back was the prohibition by which the King wanted to prevent Anselmo from going to Rome to consult the Pope on how during the last thirteen years, things had taken a turn for the worst in Anglia. The King was annoyed and replied "that I had sinned against him by only requesting such license, and he therefore proposed me to give him satisfaction as if a fault and to assure him that I would never ask him for such license again nor that would I ever appeal to the supreme pontiff, or to leave the kingdom without delay. I preferred to leave, rather than give my consent to such a nefarious action ". St. Anselm chose voluntary exile, knowing that he was leaving the English Church in the clutches of William, rather than give his assent to something that would have undermined the freedom of the Church. Whereas, we would have begun to (un) reason on the fact that, after all, not going to Rome was not a dogma of faith; that the choice of exile would have indeed put the English Church in difficulty that he wanted to defend, provoking a harsher reaction from the King; that there was a common good to defend, relationships to maintain, etc. But the Saints and true Pastors think differently: "I preferred to leave, rather than give my consent to a nefarious action".

For this reason Benedict XVI, in the General Audience of 23 September 2009, brought him to the attention of the whole Church, not only for his theological acumen and the integrity of his monastic life, but also for his "energetic struggle for the freedom of the Church, courageously supporting the independence of spiritual power from that of the time [...]. In 1103, this fidelity even cost him the bitterness of exile from his See of Canterbury. Moreover, it was only in 1106, when King Henry I renounced his right to the conferral of ecclesiastical offices, as well as to the collection of taxes and the confiscation of Church properties, that Anselm could return to England, where he was festively welcomed by the clergy and the people».