Bergoglio vs. Francis. A new concept of the papacy

Today the dominant Catholic theology holds that the Christian faith and the life of the Church is a historical process and that all life in the Spirit does not come from outside but passes through the concreteness of history. Remaining Bergoglio is therefore essential to being pope, because the papacy is not something that is "above" or "beyond" the man Bergoglio, but the Spirit opens up avenues of self-communication precisely from within that personal history. 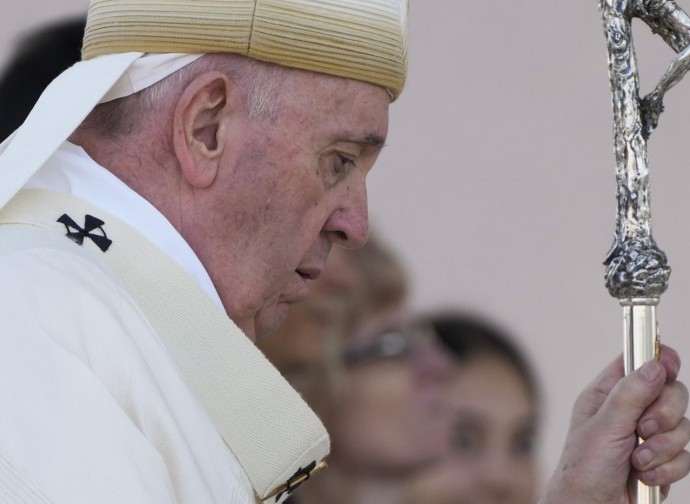 By now almost everyone has aired their views about the words spoken freely by Francis in the meeting in Slovakia with the Jesuit fathers and then on the plane returning home. I'm having my say too, not to muscle in late on the crowd, but because it seems to me that no one has touched on what seems like an essential point.

Ambiguous sentences, off the cuff comments not sufficiently thought through, theologically very questionable positions ... and so on: there has been talk of "humiliation" of the papacy, of "confusion" in the words of the pope, of overstepping the "limit of decency". All these criticisms, in a nutshell, focus on one point: Bergoglio has the upper hand over Francis. The person of Bergoglio - with his way of being, of doing, of communicating - has priority over the papacy with which he has been invested. After becoming Francis, Bergoglio has remained Bergoglio, with his idiosyncrasies, his tics, his prejudices, his instinctive aversions, his way of thinking... in short, with all his personal history. According to the authors of the many critical interventions that we have read in recent days, this is what has caused the papacy to be "humiliated", "confused" and to have overstepped the "limit of decency": instead of speaking as pope, Bergoglio speaks and moves as Bergoglio.

It is clear that if this were the problem, there would be cause for some concern, but not a great deal. It would in fact be an incidental rather than a substantial problem, linked to Bergoglio's specific case, to his character that tends to exaggerate, or to his specific personal history. Attitudes inappropriate to the papacy are not pleasing; calling for the recognition of gay couples and then writing the Introduction to Benedict XVI's book on Europe which, on the next page after the Introduction, says the opposite, is disheartening. However, if it all boils down to Bergoglio's 'case', the problem is also limited in itself.

The real issue, however, is that this is not a contingent problem, since it is actually contemporary Catholic theology that maintains that the papacy must pass through the person of the pope, i.e. that Francis must pass through Bergoglio. At one time it was deemed that, once elected pope, the pope should think and speak as pope, ceasing to think and speak as who he was before. This was because the papal investiture was attributed a transcendent meaning with respect to the immanence of the invested person: whether Ratzinger or Bergoglio, a sacred investiture compared to the profanity of the invested person. But today the dominant Catholic theology no longer thinks this way. It believes that the Christian faith and the life of the Church is a historical process and that all life in the Spirit does not come from outside but passes through the concreteness of history. Remaining Bergoglio is therefore essential to being pope, because the papacy is not something that is "above" or "beyond" the man Bergoglio, but the Spirit opens up avenues of self-communication precisely from within that individual biography.

After the "anthropological turning point" of contemporary Catholic theology, it is thought that every man is first and foremost "within himself" and that this is where his freedom lies. Everything he lives, knows, does ... is lived, known, and done supported by this "being with himself", which therefore conditions him, but it is precisely in this conditioning that his freedom is exercised, which comes before every conditioning situation and therefore transcends it. God's self-communication takes place precisely in this "being with himself", which is not reduced to any single life situation, but can only pass through life situations. Even the man Bergoglio was and is first of all "with himself" and this has conditioned and conditions all his knowing, saying, and doing, but it is precisely through this way that his being pope makes its way, which is not reduced to the uncertainties of his in-flight interviews, to certain confused communications, to certain outbursts of anger ... but at the same time cannot but pass through them.

In relation to Francis' way of doing things there has been much talk of the 'secularisation' of the papacy. The criticisms of his statements in Slovakia would confirm this. Now, the secularisation of the papacy occurs precisely when Francis is subordinate to Bergoglio, or when Bergoglio prevails over Francis. Instead of Francis "lifting up" Bergoglio, it is Bergoglio who "drags down" Francis. If this process depended only on the character personality of the ruling pope it would be limited and passing, but if it is the dominant theology that supports it, the secularisation of the papacy is a "structural" fact that goes far beyond the case of Francis, since it is its doctrinal foundation. We are not faced with hiccups that are annoying but bearable because they are contingent, but with a new concept of the papacy.