The co-authored book by Pope Emeritus Benedict XVI and Cardinal Robert Sarah explodes like a bomb on the attempt to change the doctrine of ecclesiastical celibacy, of which the Synod on the Amazon was a fundamental passage. Now Pope Francis, whose post-synodal apostolic exhortation is awaited, is in serious difficulty: proceeding with the requests of the Synod means creating a fracture in the unity of the Church. But Benedict and Sarah also teach that the unity of the Church is possible only on the Truth. And to those who object to the interventions of the Pope Emeritus, Cardinal Sarah gives a lesson: «With this book, Pope Emeritus Benedict XVI has not broken his silence. This is the fruit». 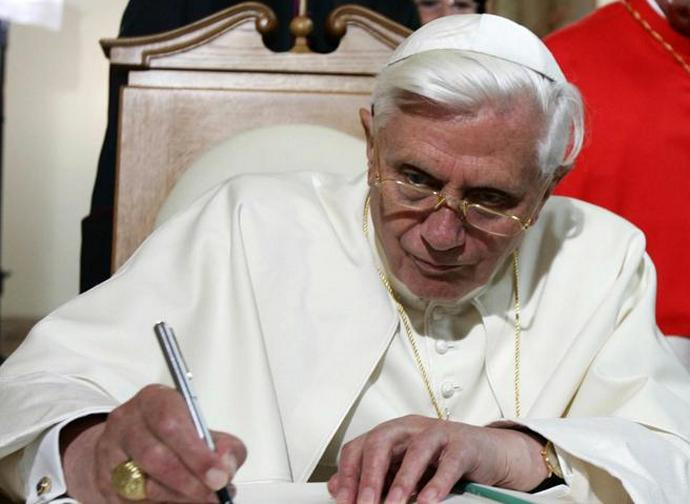 It would be a tall order to overestimate the storm this new book by Pope Emeritus Benedict XVI and Cardinal Robert Sarah will cause. The co-authored book, titled, “From the Depths of Our Hearts,” (Des profondeurs de nos cœurs), was the result of reflections on what took place during the Amazon Synod last October, considering it the epicentre of a profound crisis affecting the whole Church. In this sense, the book is the continuation of an on-going discussion, closely linked to the notes on sexual abuse of Benedict XVI and to the book The Day is Now Far Spent by Cardinal Sarah. It focuses primarily on a strenuous defence of priestly celibacy, but also addresses other issues. Nevertheless, we will have to wait until it’s available to discover the rest.

Certainly there is the perception of an unprecedented gravity of the crisis that grieves the Church. Cardinal Sarah calls it "impressive", in the interview with Le Figaro, and speaks of confusion and bewilderment. Probably, the period of confusion has well passed and we are currently in the time of apostasy. This is the reason Benedict XVI is intensifying his interventions, which enter into the merits of some deviations that risk affecting the very identity of the Church. The publication in April, of his reflections on the roots of sexual abuse had already been significant, and contradicted the conclusions of the summit on the same theme that Pope Francis had wanted at the Vatican last February. A full-bodied intervention which implicitly indicated a correction of the apostolic exhortation "Amoris Laetitia". Santa Marta found it difficult to mask a sense of annoyance for what the intervention by Pope Emeritus had created, but it carried on as if nothing had happened. The subsequent, discreet, intervention in support of the teachers dismissed by the John Paul II Institute on Marriage and Family, victims of a "coup" aimed at canceling the legacy of Saint John Paul II, suffered the same fate. Here too the "new Church" operation went ahead like a road roller.

This time, however, in the face of an attack on celibacy, which is an attack on the identity of the Church, Benedict XVI and Cardinal Sarah make the first move. It was clear that the Synod held at the Vatican was cleverly manipulated to reach specific conclusions, especially with regards to the priestly ordination of married men and the establishment of ministries for women, the first step towards deaconesses and women priests. In this regard, the book speaks of "theatrical staging", "ideological manipulations" and "diabolical lies". The next step in the program would foresee the publication of the ensuing apostolic exhortation, despite all the controversies and protests that the development and conclusion of the Synod have generated. Nothing suggests that the Pope intends to disregard the requests of the Synod.

But now Benedict XVI and Cardinal Sarah have instigated a game changer. It is a fact that cannot be ignored, it is a very clear appeal by the Pope Emeritus to the reigning Pope so that he does not change the doctrine on priestly celibacy, affecting the very identity of the Church. Pope Francis is now in a corner: if he acts on the Synod's conclusions regarding the ordination of married men, he will assume the serious responsibility of not only ignoring the Pope Emeritus, but in doing so create a rift with the tradition of the Church. In the book it is clearly remembered that chastity, for the priestly vocation, is "ontological" and that this knowledge dates back to the origins of the Church.

If instead, to avoid dangerous fractures, he stops the process he has set in motion, it will appear as a sensational u-turn that would make him lose the consent of progressives of all fronts who were already anticipating the definitive consecration of a "new Church", practically indistinguishable from Protestant confessions. It is not without reason that the usual "guardians of the revolution" have already spread rumours about the alleged manipulations of the Pope Emeritus, who would no longer be compos mentis. Obvious lies, because everyone who has recently had contact with Benedict XVI can testify, that despite his physical fragility, he is enviably  lucid.

However, there are two aspects that emerge from this book and must be highlighted.

Whatever the correction of this pontificate is involved, there is not in the least a feeling of rebellion against the reigning pope. Quite the opposite: Benedict XVI and Cardinal Sarah explicitly profess a "filial obedience to Pope Francis" and it is not mere facade. It might seem paradoxical given the effects that can be expected, but this book presents itself as "a contribution to the unity of the Church.” "If ideology divides, truth unites hearts", they both say. That is: there can be no unity without a "search for truth with an open heart.” What must be pursued is unity around Christ, at His revelation, not a political agreement. This is the only way, it can be understood why this intervention is a true act of love also towards the Pope. It is a great lesson which explains what the mystery of the Church is, and which should install courage for those priests and bishops who, although aware of the drift and confusion in the Church, have so far remained silent for a misunderstood and ambiguous obedience to the Pope. If the love for the truth shown by some cardinals and bishops - obviously marked as "enemies of the Pope" - did not suffice, there is hope that at least of Benedict XVI’s love of the Church, will induce others to have courage for the truth.

The second question concerns the most common criticism aimed at Pope Benedict: on resigning he said he would be silent, why then does he continue to speak and obstruct Pope Francis' decisions? Cardinal Sarah replies in the interview with Le Figaro: "With this book, Pope Emeritus Benedict XVI has not broken his silence. This is the fruit». It is a very important answer, because we are all tempted to reduce silence to simply keeping quiet. And to see his resignation in political terms, a step aside which implies getting out of the way and leaving free space for the new "masters." This is not the case for the Church: silence is not empty, it is not absence; silence is presence, it is letting one's life be filled by the Presence.

In the preface to Cardinal Sarah's book The Power of Silence, Pope Benedict explains that silence means "entering into the silence of Jesus from whom His word is born." For the past seven years, Benedict XVI has lived this "silence with Jesus" which gives him a deeper understanding of the Word of the Lord. Among other things, it is here that the profound harmony with cardinal Sarah, master of silence, is born. And it is from this silence that the conviction expressed in the book and said with Saint Augustine arises: "I cannot be silent". Faced with the threat looming over the Church, the Pope Emeritus, filled with the word of God, cannot be silent, he must do everything to prevent the boat from being capsized. All the more reason therefore the judgment of Benedict XVI and of Cardinal Sarah cannot be dismissed with the usual political and ideological categories that define the heralds of the "new Church". And teach something important to every Christian.