Bees had been present in the life of Saint Ambrose since his childhood, when one day a swarm began to fly in and out of his open mouth without bothering him, while he slept in his cot in the garden. The episode is depicted on an altar in the Basilica dedicated to him in Milan. And Saint Ambrose, who would always love bees and even breed them, is the protector of beekeepers.
- THE RECIPE: ROASTED LOIN CHOPS 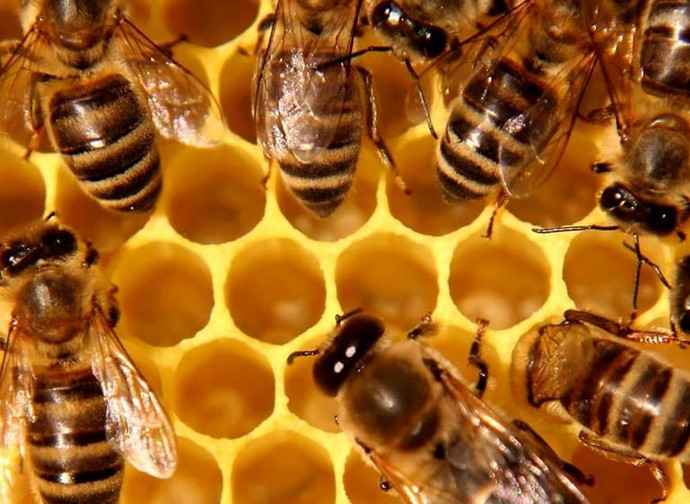 It is a warm June morning in the year 384; we are in Milan, in the city's basilica. A handsome young man enters, trying not to make any noise. He sits at the back, adjusting his white robe. He is there to please his mother, who for days has been obsessively asking him to come and listen to the preacher; she goes there every day and derives great benefit from it. But for him it is pure boredom. He is not a believer and considers all this a waste of time. He is in Milan because, thanks to the help of the prefect of Rome Quintus Aurelius Simmacus, on the recommendation of the Manicheans, he has managed to obtain the chair of Rhetoric in this rich city.

The young man is Augustine of Hippo, his mother is Monica, and the preacher is Ambrose. Today, all three are saints of the Church.
But let us return to that distant day. Augustine only hears the end of the sermon and, against all expectations, his heart is already won over by Ambrose's words.
Other days would follow, other sermons, other doors that would slowly open, one after the other, in Augustine's soul. Until his conversion, his baptism three years later in 387 (celebrated by Ambrose himself), and the extraordinary vocation that Augustine embraced with fervour and infinite love, which ended with his violent death at the hands of the barbarian hordes years later.

But Augustine, on that June morning, in that city which was the pride and joy of Valentine's empire (Milan, with its almost 130,000 inhabitants, is a flourishing city of productive activities, a centre of trade and wealth), did not yet know that an extraordinary destiny awaited him. All thanks to that man, Ambrose, priest, bishop, preacher, and philosopher of truth: the latter point accelerating Augustine's conversion.

But in addition to this, Ambrose was also a great lover of bees and of honey. It is not by chance that he is the patron saint of beekeepers.

His love affair with bees began very early on, during his childhood. It is said that Ambrose as a child was taken into the garden by his nurse. The woman set up the cradle and then returned to the house to fetch something. In that short space of time, a swarm of bees surrounded the cradle, and the insects, seeing that the child was sleeping with his mouth open, explored that small cavity, entering and leaving it undisturbed. Ambrose continued to sleep unaware, the bees did not bother the baby, who noticed nothing and did not wake up. His father, who had arrived in the meantime, was initially panic-stricken and astonished, but then considered the event a prodigy and forbade the nurse to chase away the bees. The bees then spontaneously flew off into the skies, so high that they could no longer be seen. And Ambrose's father, the prefect of Gaul, thanked the Lord by offering his son to God in prayer. The episode is beautifully depicted in a detail on the Altar of Vuolvinio in the Basilica of St Ambrose, which shows St Ambrose in the cradle being fed by bees (an opportunity to visit the Basilica to discover many works of art and to look for this detail). And Ambrose throughout his life loved bees, he himself bred them and offered honey to the poor.

When he grew up, he became a governor, bishop, writer, and protector of the poor. He is venerated as a saint by all the Christian churches that provide for the worship of saints; in particular, the Catholic Church counts him among the four greatest Doctors of the Western Church, together with St Jerome, St Augustine and St Gregory I Pope. His story is so rich and complex that it deserves an in-depth study that these pages do not allow us, for reasons of space. We will focus on Ambrose's relationship with bees and beekeepers. Beekeeping is the most universal form of animal husbandry that exists. Humans have practised it at all times, at all latitudes, and in all climates. Wherever there is human life, there are also bees.

Man has been using honey since the dawn of time. A Neolithic cave painting from the "Cueva de la Araña" (spider's cave) near Valencia in Spain, dating from around 5000 B.C., shows a person hanging from vines, surrounded by flying bees, sticking one hand into a tree trunk in search of a honeycomb full of honey, while with the other hand he holds the basket in which he will deposit his harvest (see photo on the right).

Another interesting piece of evidence that, although chronologically much more recent, also dates back to a prehistoric culture, is a graffito from Matobo Hills, Zimbabwe. It shows a man smoking out a bees' nest in order to extract the honey. The cave painting, which possibly dates back to the beginning of our era, may be the oldest documentation of the use of smoke in treating bees.

We do not really know for sure when actual beekeeping originated, but it was certainly a normal activity in Egypt during the Old Kingdom. Scenes of honey collection and preservation are in fact depicted in a bas-relief of the solar temple of the 5th dynasty ruler Niuserra at Abu Gurab, dating back to around 2400 B.C., which also has the first known representation of a beehive.

Even in classical antiquity, when there were no alternative sweeteners to honey, and wax was used for many purposes, beekeeping was an activity of great economic importance.

The importance of beekeeping in Greek culture as far back as archaic times is evidenced by the cult of Aristaeus, who was believed to have taught men about beekeeping along with sheep farming and cheese production.

In medieval Europe, beekeeping continued to be practised without interruption; special care was devoted to this activity by various monastic orders, partly because of the need to procure the wax necessary for candles and tapers used in churches.

In the late Middle Ages, theoretical treatises on the subject also reappeared, such as the one included in Pietro de' Crescenzi's work on agronomy (pictured left: the Tacuinum Sanitatis, 14th century).

In the 19th century, the beekeeping sector underwent great development throughout the world. The straw hive with mobile honeycombs of the Greek type had inspired a number of inventions over the centuries towards the rational hive, but they had all come to a standstill. In 1851, Lorenzo Langstroth (1810-1895), an American Lutheran pastor and apiarist, inspired by some previous experiences, invented the mobile honeycomb, which paved the way for numerous inventions, many of which either failed or were not pursued. Some of these, however, led to a real revolution within a few years, resulting in the modern beehive.

Unlike the old hive, the new structure consisted of a basic module containing moveable combs and a modular system of honeycomb frames, also containing mobile combs, for the harvest period. This was followed in 1857 by comb foundation sheets and in 1865 by the centrifugal honey extractor, which sealed the birth of modern beekeeping.

Today, bees are in great danger in many parts of the world. The intensive use of insecticides in agriculture is the primary factor in the extermination of bees. We must all strive to save them, paying homage to the great saint that was Ambrose, and not just on 7 December, when we celebrate his feast day, but every day. Because by saving the bees, we save ourselves.