Armenia, they fight with faith, conversions under the bombs

The Daily Compass encounters Armenia; the prayers of the 23 year old soldier who enlisted and was wounded in defense of his homeland, the soldier and his bride amidst ruins, the priests who depart to be with the combatants. And the Russian correspondent wounded during the artillery shelling of the cathedral and narrates the miracle of his survival in the little girl who medicated him: “I was an atheist, but I now believe in God”. Testimonials of a combative people animated by faith in Christ. 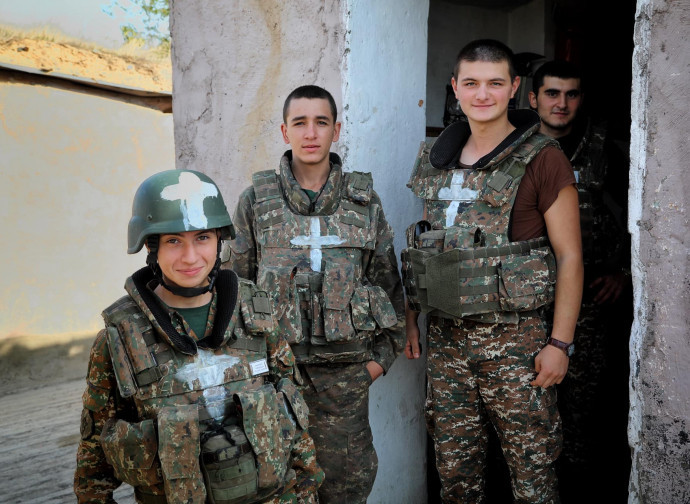 After the third truce broken by Azerbaijan, Catholicos Karekin II, the supreme patriarch of the Armenian Apostolic Church, launched an appeal, speaking openly about “the war imposed upon us by Azerbaijan”, its negative attitude towards any effort to support a humanitarian cease fire, its ultimatums blocking any negotiations, the shelling of the Artsakh (Nagorno-Karabakh,) region and the people living there, the considerable casualties caused, its resolve to settle the issue of Artsakh through recourse to weapons, as the history of Artsakh has witnessed over the last few decades”.. The patriarch then evoked “the sacrifice of our sons and daughters. . .our brave soldiers”, who “continue their courageous resistance, constantly repelling the enemy with their absolute conviction that victory guarantees the safety and the stability of the Republic of Artsakh”. But who are these young men smiling on the front lines in the picture below, who, as soon as they turn eighteen, leave for war, paint crosses on their helmets and uniforms, and ask priests to pray with them before combat begins? “Vahe and Edgar were born together and died together”, said the mother of these Armenian twins, who left their own pursuits to defend the homeland. “They were studying music and just loved playing their instruments together. Wherever they were, there was music and joy”. In the video recorded by their mother a few days after their death on the Armenian border, she  says, “they happily left for the front, bringing with them their instruments, and when there was a short 10 minute break,  they would play for their fellow soldiers”.

This is the grit, the makings of the Armenian soldiers we saw singing their love for the homeland and the faith, and whom we admired as they bore witness to a real sense for which to give their life. That’s why whenever Vahe and Edgar were able to call home, they urged their loved ones “not to be worry about us; just tell us how you’re doing”. Some of their friends said “they are heroes of the homeland. There is also another interview that illustrates the mettle of these young Armenians: Hamlet Badalyan (in the picture on the right), a 23 year old future director, who volunteered as of the first day the Azeri launched their attack (27 September), explained to the Daily Compass that “he and his friends enlisted as volunteers and immediately left for the front. We were in Mataghis, a village in Nerkin Horatagh...we came under artillery fire and I was wounded. This happened on October 1st: we were heading for the front line, and had just arrived. We were setting up our weapons to defend a guard post when the shells began to fall”. During that first artillery barrage, Badalyan acted as a human shield for a friend of his, “to defend him, and then, during the second round of shelling, shrapnel sliced into my heel, with more shrapnel lodging in my back, my lung, and my intestine”.

He was taken to the hospital where he had to have four operations, but he did not regret having enlisted:  “I knew exactly what I was doing when I volunteered for the call to arms. The only thing I’m sorry about is that I was wounded and lost my best friend, a childhood friend. So, once I’m back on my feet, I’ll go right back to the front to defend my homeland and continue the my friend’s unfinished battle. . .I’m not afraid”. When hearing the words of this soldier waiting to recover and praying to God for his comrades-in-arms, the wellspring of this courage becomes clear. Karekin II explained this in his appeal when speaking about the Armenian forefathers, who “courageously rejected fear and despair, and defeated death with the Resurrection of Christ and their faith. This is how they wrought glorious victories for our homeland. In truth, those who are courageous always generate courage!”. Luise Ghahramayan, the director of Armen Tour, explains to the Nuova Bussola Quotidiana that, “the fact that the Church is at the front with the soldiers certainly makes them feel they are accompanied. Some of them are even baptized (see here) on the battlefield by priests. These are the ones born under the Soviet regime that imposed state atheism. Many priests have left their rectories and churches to assist those defending our homeland”.

Also narrating the moral strength of the Armenians, however, is a Russian war correspondent seriously wounded during the dual shelling of the cathedral of Ghazanchetsots (San Salvatore) in the town of Shushi.. Interviewed while in convalescence,  Levon Arzanov (in the picture below, to the right) explained that on that same day the Azeri had bombed “a hospital, a local cultural center, and a church. . .the main places for inflicting a moral and psychological blow to the  population. That’s the target, the aim. That’s to say, more or less, culture, health and faith”. Not by chance, in addition to the cathedral there are two renovated mosques in Shushi, , and no one destroyed them”.

Together with two other journalists, Arzanov was inside the cathedral when, twenty minutes after the first shelling, it was bombed again. He wasn’t wearing a helmet because “even soldiers take them off in church”. Seriously wounded, he managed to crawl out of the church: “There was an old man there and I asked him for help. Seven men came out of the refuge together with him. . .they began to help us. . .and we went to the hospital. I was taken to a hospital that had been shelled. . .nothing but broken widows and blood stained uniforms. And no one around! The man accompanying me ran up and down the corridors crying out doctor, doctor. Someone replied from somewhere in the basement. We went down there. . .were placed on some mattresses, and I was medicated there for the first time. Since we were all covered with soot, we started washing our hands. . .this was done by a small girl around 8 years old. She cleaned us up with water and said something  in Armenian . . .with tones of  resoluteness and trust. . .at that moment I almost cried over the fact that a little girl was sitting there in this basement helping the wounded”. Lastly, Arzanov underscored the absolutely surprising feature of this war: “there is no domestic looting. I’ve seen many wars, and I’ve often seen what happened to stores and shops: windows shattered with stones, and all the food looted.  But quite different is the behavior of the people in Karabakh. We had a Lexus, and when we reached the church we hadn’t even closed the car windows. We thought we were only going to be there for five minutes or so. But the car sat there with open windows for three days, and nothing was missing”.  Even if “the shops with shattered windows were full of goods, no one even thought of taking anything”.

Survival in a church bombarded, the elderly men helping him, a little girl who attended to his wounds, a people that does not succumb to desperate immoral behavior even during warfare and pangs of hunger led this journalist to say, “quite honestly, I am an atheist.. .I didn’t believe in God before. Before. Until the day before when God in a church protected us with His heavenly shield. After all this, it’s difficult not to believe. . . my baseball cap was left behind in the Church, and it’s full of holes”.

In that same bombarded church a soldier and his fiancée  were married on October 24th. They hadn’t seen one another for a month because he had been on the front lines. The priest explained to this couple that matrimony is the sign of victory in the sense that life continues.  In the background the voice of the journalist present at the wedding: “We must be victorious with love, and believe”.

The salt of the earth