After the death of his parents, inspired by the words of Jesus in the Gospel, Anthony sold everything to give it to the poor. He retired to live in the desert and the devil tempted him in vain several times, even in the guise of a pig, from which he later emerged. Young men gathered around the saint and became his disciples, giving an impetus to monasticism. His monks became accustomed to rearing pigs.

- THE RECIPE: FRESH HAM IN CIDER 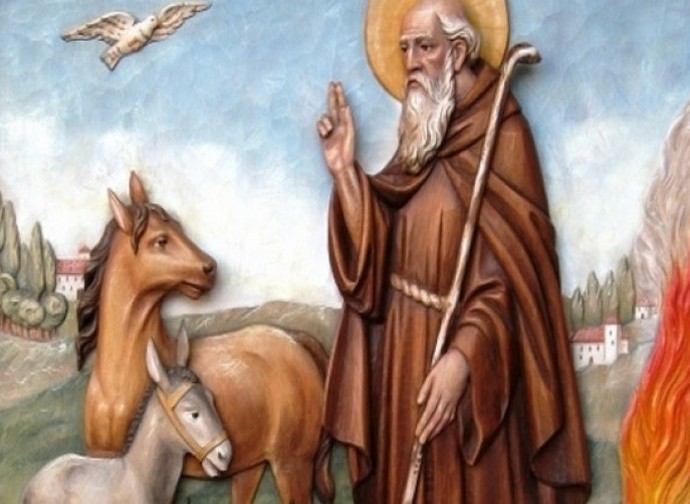 According to chapter 5 of the Gospel of Mark, there is a man from the country of the Gadarenes, an area that did not belong to Judea, east of Lake Genesaret who was possessed by an ‘unclean spirit’: he lived in the tombs, cried out day and night, beat himself with stones and could not be restrained in any way. Jesus freed him from that spirit, which, He discovered, was not one, but a “Legion”, that is, many spirits, who then entered into a group of two thousand swine that jumped off the cliff and drowned to death (cf. Mk 5:1-20).

Almost three hundred years later, another man, voluntarily isolated in a desert, was tempted by the devil who often took the form of a piglet. This hermit did not kill the pig, but only tamed it, and so the piglet became a pet.

The anchorite was Anthony, born in 251 in Coma (present-day Qumans), Egypt, to rich and very religious parents, who took great care to educate him in a Christian manner. At the age of eighteen he was orphaned of both parents, became the guardian of a little sister, and possessed considerable wealth.

But the voice of God was not long in coming: he had only been an orphan for six months when, during the readings in church, he heard the words Jesus had addressed to the rich young man: “If you want to be perfect, sell all you have and give the proceeds to the poor, so that you may have treasure in heaven, then come and follow me”. Anthony took these words as if they were spoken to him: he went home, distributed his wealth to the poor, reserving only a small portion for his and his sister’s maintenance. Shortly afterwards he began to reflect on another phrase spoken by Jesus: “Do not worry about tomorrow”. This sentence strengthened in him the desire for absolute poverty and dedication to God body and soul. He had his sister accepted into a monastery of virgins, while he withdrew to live a penitent life in the desert. 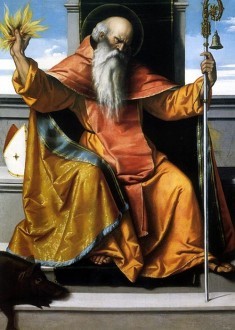 He practised the virtues he saw being practised by other penitent saints, whom he often visited in their cells to learn from them the way to perfection. He also worked for food, and whatever extra he earned he gave to the poor. Evidently, the devil could not bear such a desire for spiritual perfection in a young man, so he did everything possible to divert him from his purpose. But Anthony prayed to Jesus night and day and accompanied his prayers with the most rigorous penances. He ate very little, once a day, only poor foods, and slept on the bare earth, torturing his body in every way: he thus obtained complete victory over the devil.

After a while, he felt the need to isolate himself even more. He wished to be more secluded, so he went into the desert and chose a cave as his home. The devil followed him there and began to lay his snares again; once he came and beat him so badly that he was close to death. But although he lay on the ground exhausted, he continued to pray. Legend has it that the devil, who often appeared in the form of a pig, tired and defeated, came out of the animal and left. But the pig remained next to Anthony, to keep him company.

So did a group of young men who, having heard the story from a friend of Anthony’s who sometimes went to the cave to bring him bread and water, were fascinated by the spiritual strength of the man. And they asked to become his disciples. And so, thanks to Anthony, among the first Desert Fathers, monasticism spread: groups of men who led a life of prayer in solitude or in small communities separated from other people. He was responsible for setting up permanent families of monks who, under the guidance of a spiritual father, the ‘Abba’, consecrated themselves to the service of God. 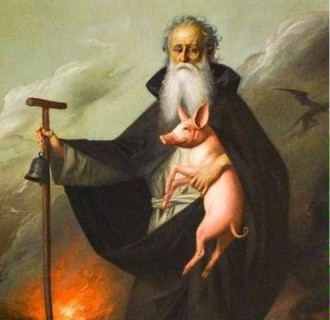 Always eager to help the poor and the sick, Anthony made his primitive monastery a place of welcome for the needy and those suffering from various diseases. The monks looked after them and, to feed them, they got into the habit of raising pigs, which were easy to care for and no parts of them were wasted. They specialised in the treatment of Herpes Zoster, also called “St Anthony’s Fire”: the medicine used was an ointment made from pig fat, whose recipe was perfected by the Antonites into a “fixed” recipe and codified eight centuries later, in the 11th century. Towards the end of his life Anthony cultivated a vegetable garden, which was systematically ravaged by demons, but he patiently replanted the vegetables.

To his disciples Anthony continually recommended perseverance, custody of the heart, mutual exhortation, the practice of virtues and prayer. He died on 17 January 356, at the age of 105, fighting the Evil One to the end, which he managed to defeat with his unshakable faith.

The life of Saint Anthony Abbot is known above all through the Vita Antonii published in about 357, a hagiographic work written by Athanasius, Bishop of Alexandria, who knew Anthony and was assisted by him in his fight against Arianism. The work, translated into several languages, became popular in both the East and the West and made an important contribution to the affirmation of the ideals of monastic life. In the Vita Antonii, the description of Anthony’s struggle against the temptations of the devil is of great importance. A significant reference to Anthony’s life is found in the Vita Sancti Pauli primi eremitæ written by St Jerome in the years 375-377. It recounts the meeting, in the desert Thebaid, of Anthony with the more elderly Paul of Thebes. The account of the relationship between the two saints (with the episode of the raven bringing them bread so that they might be fed, to the burial of the very old Paul by Anthony) was later taken up in medieval accounts of the lives of the saints, first and foremost in the famous Legenda Aurea by Jacopo da Varazze, but also carved on the cross at Ruthwell in Cumbria and on the eight Irish crosses dating from before the year 1000.

He is remembered in the Catholic and Lutheran Calendar of Saints on 17 January, but the Coptic Orthodox Church celebrates him on 31 January. All those who have to do with fire are placed under the protection of Saint Anthony, in honour of the story that the Saint even went to Hell to fight the devil for the souls of sinners. He is invoked against the plague, scurvy, contagious diseases and herpes zoster. He is the patron saint of farmers and animal breeders, but also of glove makers, weavers, shearers, butchers, sausage-makers, confectioners and arquebusiers. He is also the patron saint of basket weavers, because the saint used to weave baskets to combat idleness and to provide himself with enough to survive, and of gravediggers, because of the part he played in the merciful burial of the hermit Paul. According to certain popular sayings, whoever is struck by sudden misfortune “must have stolen St Anthony’s pig”; schemers and scroungers go “from door to door like St Anthony’s pig”.

St Anthony’s life is full of Christian teachings, the first and foremost of which is that of defeating evil with prayer and faith in God. His deeds help us to develop in ourselves attitudes of spiritual strength such as perseverance and trust in goodness.