An attack on the Polish Church seeks papal support

A small group of Polish Catholics bought an advertising space in the Italian newspaper La Repubblica in order to make an "appeal" to Pope Francis. They implored Francis to "repair" the Polish Church while accusing Catholic hierarchy of covering up child abuse cases. This is a specious attack. The issue, however painful it is, is relatively marginal among Polish clergy: of the 1000 persons convicted for paedophilia offences, 997 were lay people and 3 were priests. Still, the press are treating the matter as if it primarily concerned clergy and do not explain that the few cases of sexual abuse of young males involve mostly priests with homosexual tendencies. The appeal launched in La Repubblica is only the latest in a long series of attacks, including films and foundations, aimed at denigrating the Church. 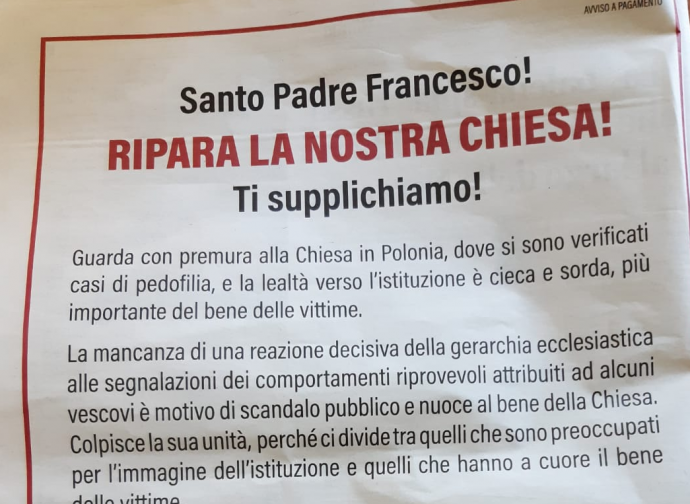 June 29 is a special day in Rome: It is the Solemnity of the Apostles Peter and Paul. It is also the feast of the Bishop of Rome. Therefore, on Monday Catholics all over the world turned their attention to the pope as he celebrated a Mass inside St. Peter’s Basilica at the altar built over the tomb of Peter. And on this particular day for the Catholic Church, a small group of Poles chose to publish an appeal to Francis in the Italian newspaper La Repubblica.

What is this all about? A lady from Gdansk, Justyna Zorn, began organizing protests - as early as 2019 -  because she accused the Church of not taking strong enough action against clerical abuse cases. Since she wasn’t satisfied, Zorn took her cause internationally. Hence, this year, for the Solemnity of Saints Peter and Paul, she purchased advertising space in Italy’s La Repubblica in order to make an "appeal" to Pope Francis.

The appeal is an attack on the Church in Poland. According its supporters, the Church is guilty of covering up individual cases of sexual abuse of minors. As we read on a multilingual website,  which republished the La Repubblica advertisement, some names of bishops are mentioned (Sławoj Leszek Głódź, Jan Tyrawa, Edward Janiak) but which were omitted in the newspaper text. We also see a reference to Poland’s Apostolic Nuncio (whose name was omitted from La Repubblica appeal). The original online appeal, which launched a fundraising campaign to pay for the advertisement, was signed by only 32 people. To obscure this embarrassing fact, the Italian newspaper text cited that 635 people contributed to the paid announcement. What’s more, these few people, who say they are "committed Catholics", had the gall to write as if they represented all Polish Catholics! All this was made in the guise of a “plea" addressed to Pope Francis to "repair" the Church in Poland.

The La Repubblica appeal is the latest in a series of attacks on the Polish Catholic Church in the name of fighting paedophilia. The most surprising thing is that the phenomenon of sexual abuse among Polish priests is negligible and is, in no way, comparable to the situation in the United States or Ireland. Painful cases have occurred, no doubt, but they indeed amount to a few. Of the 1000 persons convicted of paedophilia, 997 were lay people and only 3 were priests

Nonetheless, the media treat this issue as if it principally concerned the Church, unjustly persuading public opinion that paedophilia is closely linked to the Church and its clerics. Since there are very few instances, which concern not even 1% of Catholic clergy, 28,000 good Catholic priests are painted as potential paedophiles. The press shrouds another aspect of the matter: most abuses that actually involve priests are linked to homosexual tendencies of ministers who abuse young males. Therefore, it is not simply a matter of paedophilia. All said, the mere mention of "paedophilia inside the Church" is a hard blow and stigmatizes all priests.

The appeal is not the first attempt to involve the pope in matters concerning the Church in Poland. On 20 February 2019, on the eve of a Vatican meeting with the presidents of the bishops’ conferences to discuss clerical sexual abuse of minors, representatives of the Polish “Be Not Afraid" Foundation came to Rome. The foundation was supposed to represent victims of Polish paedophile priests and seek compensation from the Catholic Church. Their representatives arrived in Rome with a bogus report claiming legal violations were made by bishops in dealing with certain abuse cases. Their delegation was composed of Marek Lisiński, an alleged victim of abuse and president of the foundation, in addition to two members of “Be Not Afraid”: Joanna Scheuring-Wielgus member of the liberal-libertine party "Now!" (well known for her stance against the Church) and Agata Diduszko-Zyglewska, a militant feminist linked to the radical leftist “Political Crisis” movement and organizer of the “Days of Atheism” whose aim is to eliminate the teaching of religion in schools. This particular delegation even managed to speak to Pope Francis during an audience in Paul VI Hall. The problem is that Lisiński, who was introduced to the pope as a victim of a paedophile priest, is a con artist and blackmailer.

In 2013 "Silence in the Shadow of John Paul II" was filmed in Poland. In that same year the "Be Not Afraid" Foundation was established. In the meantime, a massive campaign to denigrate Polish clergy and the Catholic Church was well underway. It was called a "den of paedophiles" by the media. In the past, Lisiński had borrowed money from a priest named Zdzisław Witkowski. Lisiński did not want to pay it back, so he accused the priest of molesting him 30 years earlier. He then created a web site where he explained how one could seek compensation from the Church. Later, he began his career in the "Be Not Afraid"  by becoming its president. It turns that, while heading up of the foundation, he demanded money from people who had received legal settlements.

It was Lisiński who brought the Sekielski brothers - directors of the one-sided clerical abuse film - into contact with the alleged victims. He asked for a huge sum of money for his appearance in the film and for facilitating contacts. In the end, the directors decided not to compensate him and eliminated Lisiński's testimony from the film so as not to compromise the launch of their film and to make it clear they wanted to avoid speculation behind accusations against priests.

One film apparently was not enough. The Sekielski brothers produced a second documentary that dealt with a paedophile priest from the Diocese of Kalisz. The priest was moved from one parish to another without adequate action taken by Bishop Edward Janiak. This was a regrettable and outrageous case which should have never occurred. The film’s directors made it into a national event by ratcheting up publicity in the media aimed at confirming a partisan and false equivalent: "the Church = paedophilia." This was morally devastating to the Polish Church. Moreover, the film was launched during Poland’s celebration of the Centennial of John Paul II’s birth and while Pope Francis stigmatized the issue of child abuse by saying 18 million children are those affected in Europe alone and obviously millions of paedophiles who end up being ignored by selective "defenders of children" (better to pay attention only to "the wounded in the Church").

There is another side to the appeal launched in La Repubblica: in Poland there is a group of Catholics who are critical of today’s Catholic hierarchy. They would like a more "democratic", "open", less “dogmatic” Church, one which is free from "clericalism." For them, every case of child abuse becomes a pretext for criticizing the Church and, no doubt, with ulterior intents and purposes. Thus, the voices of these few "committed Catholics" have been elevated not only by the decidedly anti-clerical press but also by certain Catholic media who would like to "modernize" the Church by their own standards. As Justyna Zorn said in one of her interviews: "The Church deserves a good kick in the pants." Unfortunately, following the appeal launched recently in Italy, attempts are now being made to involve the pope in this "game."