The churches that have been burned in France are only the tip of the iceberg of a climate of hostility against Christians. There is an obvious convergence between secularist forces and the ever more significant presence of Islam. While mosques are being built, Christian churches – whose maintenance is the responsibility of the State – are being abandoned and closed. The Bishop of Montauban, Bernard Ginoux, says with regard to Hagia Sophia: “The Abu Dhabi agreement has been abandoned; Erdogan is implementing a policy of expansion and hegemony in the Mediterranean in the name of Islam; dialogue with him is impossible.” 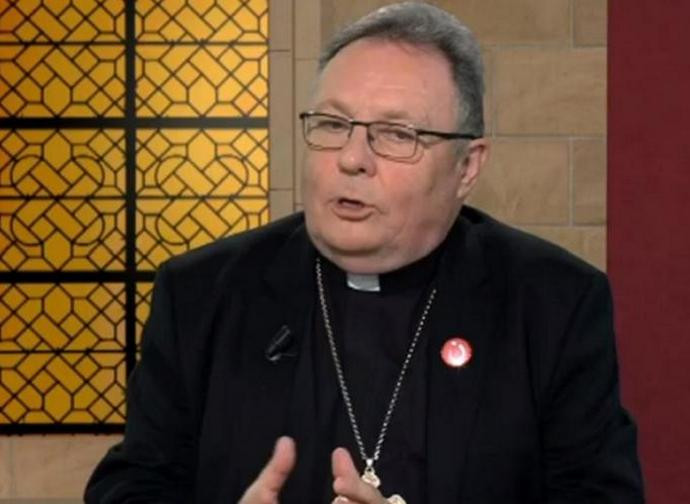 The images of the Cathedral of Nantes in flames have regrettably provoked a déjà-vu effect. It is difficult not to recall the memory of the tragic fire that little more than a year ago devoured such an important symbol of Christianity as  Nôtre Dame. Scenes of churches in flames, when they are not being vandalized in a blasphemous manner or demolished to make space for parking garages, are sadly becoming all too common in post-Catholic France. Many commentators have emphasized the symbolic aspect of these episodes, but the size of the phenomenon is such that it requires awareness. The Daily Compass spoke about the fears, expectations, and hopes of the Church “beyond the Alps” with Msgr. Bernard Ginoux, the bishop of Montauban, in the region of Occitanie in southern France.

Your Excellency, does the fire in Nantes make French Catholics feel more afraid or abandoned?
The fire – which was intentional – that broke out in the cathedral of Nantes on Saturday morning has caused much suffering for the Diocese of Nantes, for the faithful and all Catholics. It is difficult not to include this incident on a list that has been growing for the last two or three years in French territory. Added to this is the degradation and profanation of churches and chapels. It is unfortunate that the majority of the time the perpetrators of these crimes are not identified and the investigations are inconclusive.

The Italian historian Marco Gervasoni has written that the fires and the collapse of many churches each year in France demonstrate “a congenital disinterest of the recent governments.” Does this lack of care hide the ideological intentions of those who want to go beyond the secularization of the state and aim at the secularization of society?
In France, the state owns the cathedrals built before 1905 in virtue of the laws of separation between church and state. Moreover, according to this law, the parish churches built before 1905 are city property. The proprietors therefore have the duty to maintain these edifices in order to provide for their safe use. But strong currents that are the fruit of a secularist mentality are seeking to overcome this obligation, maintaining that the state should not finance the maintenance of religious buildings. Furthermore, the significant presence of Islam that builds mosques is a pretext for not “favoring” another religion. Egalitarianism seems to be an imperative for not maintaining Catholic churches.
We need to be patient and insist on getting what we need. With increasing frequency, when buildings or chapels present risks for their users, it is easier to close them rather than finding the funds necessary for their upkeep.

Commenting on the fire of Notre Dame, Macron spoke of “literature,” of the “imaginary,” and even brought up “fate,” but made no mention of Christian identity.
The president of the Republic has called the cathedral of Notre Dame a cultural treasure. This is not false, but it is first and foremost the expression of the Christian faith of our ancestors and of those ages that formed France, that is to say it expresses the “Christian roots” of our nation. It has been said that “the cathedrals are the mirror of France” because the life of a people is there and their encounter with God who became man. It is certain that a secularist current, with an aggressive ideology, wants to strip France of her soul in this way.

According to the Ministry of the Interior statistics, episodes of Christianophobia in France increased by 250% between 2008 and 2018. In 2019 there were more than one thousand attacks on places of worship and 90% of these involved Catholic churches. When did France cease being, in the words of De Gaulle, the “eldest daughter” of the Church?
The acts against places of Catholic worship, priests being attacked like Fr. Jacques Hamel, and physical and moral attacks have all increased in the last few years and are rarely legally prosecuted. It is often said that “The Church ought to forgive!” For some time France has ceased being “the eldest daughter of the Church” or else she is a daughter who has forgotten her origins. We are in a moment of strong de-Christianization in which the Christian tradition no longer irrigates contemporary culture. Young people for the most part are totally ignorant of the religion of their ancestors. Thus they can easily become drawn into blind dead ends.

Msgr. Dominique Rey, the bishop of Fréjus-Toulon, maintains that this intolerance is the fruit of the convergence of secularism and the emerging overpowering of Islam. Do you agree?
Msgr. Rey is correct in maintaining that French society is hardening under the influence of secularism, which denounces anything that seems to favor Catholicism, and under the influence of an Islamic current that wants to impose its presence. Secularism has forbidden anti-abortion demonstrations and has prevented orators from speaking in determined places (Sciences-Po in Paris). In the past few days, in a discourse at the National Assembly, a deputy said that a bishop does not have the right to express his opinion on legislative proposals. Religious symbols like crosses cannot be worn in public offices. On the other hand, the Islamic veil has become more widely accepted and halal products have very important shelves in the supermarkets that publish publicity specials for Ramadan, just like the media. Society is more and more marked by the presence of Islam. Obviously describing this reality is not a criticism, because Moslems ought to be fully citizens, but if secularism is a battle against religion, it must avoid the systematic prejudice of attacking [only] the Catholic Church. Otherwise it is a purely ideological approach.

There is a physical persecution that we see with the arsons in the churches, but there is also a media persecution that is manifested, for example, in the judiciary case of Cardinal Barbarin, who was later totally absolved of the accusations against him, but in the meantime he was delegitimized by public opinion. Why are Catholics targeted in France, and which of the two persecutions is more dangerous?
Undoubtedly the media attacks against the Church are stronger, because they are presented as the truth. In the case of Cardinal Barbarin, the media love to recall the Bernard Preynat affair [a former priest convicted of abusing scouts] in order to recall the scandal that struck the cardinal. We know that the media can destroy whomever they wish, and we have seen this fully in the political arena. The media is also the cause of much fear: the fear of the media paralyzes many of the Church’s leaders. It is true that we are not free from sin and defects, but for 2000 years the Church has brought to the world a good by which it lives (equality, brotherhood, respect for life, attention for the weak…) even if there is still much to do.

With regard to Islam, you wrote on Twitter that the decision of Erdogan to reconvert Hagia Sophia into a mosque is a “refutation of the Abu Dhabi Document” and demonstrates that “dialogue is impossible.” Why do you think this?
Following the Hagia Sophia affair, I said that dialogue with Erdogan is impossible and that the Abu Dhabi document has been abandoned. I think this because the Turkish President is implementing a policy of expansion and hegemony in the Mediterranean in the name of Islam. He does not hide it, and he acts accordingly. We must distinguish dialogue with Moslem people, in reciprocal respect and listening, from dialogue with Islam, whose essence is conquest. Getting to know each other well is necessary for dialogue between persons. The dialogue on life should be always sought after, but political and religious dialogue is much more difficult because our approaches confront each other with different cultural and religious realities.

Repeating the title of a book by former minister Philippe De Villiers: will the bell towers still ring tomorrow in France, or have they already ceased to do so?
Yes, the bell towers will ring once again tomorrow! France, like Europe, is undergoing a painful period in which the Christian faith is no longer the point of reference. The so-called bioethical laws of society want to realize the triumph of a world without God. Contemporary man wants to believe in his self-realization, refusing to be a creature and making himself the judge of good and evil. This is the ancient original sin: “You will become like God.” Just when mankind thinks he has reached his fullness, he will see his failure. But the God who is always present has sent us a Savior. In that moment their eyes will open and they will see God. This is the unwavering Christian hope. We would simply like man in his folly today to not come to the point of destroying himself and annihilating the world. When deprived of all ideology, environmental respect proceeds from this hope: if mankind accepts the salvation of God, he will see the salvation of the world.