A “Made in Italy" canine mascot set for football victory

As with many sports, teams often adopt a mascot, and this year at the European Championship is no exception. Italy, a major competitor and past champion, has adopted the cutest canine mascot modeled on an extraordinary Italian breed, the maremmano-abruzzese sheep dog... 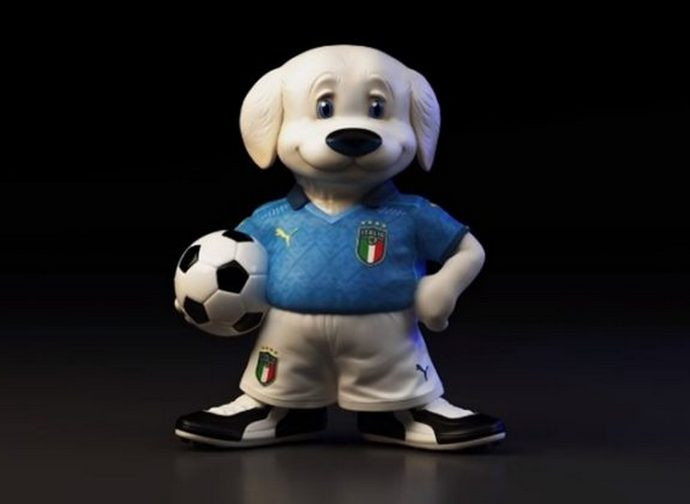 To say that football fever has returned to Europe is an understatement. As the vile covid virus now is under better control, UEFA (the European football league) has decided to stage the 2020 deferred European championship matches this year.
To share the enthusiasm more widely, 11 countries will have the honor of hosting the games instead of only one. Matches are being held daily in various venues as 24 national teams compete fiercely to be the new champions. Quarterfinals and semifinals will take place in early July and the UEFA trophy will be awarded to the winning team on July 11.

As with many sports, teams often adopt a mascot, and this year is no exception. Italy, a major competitor and past champion, has adopted the cutest canine mascot modeled on an extraordinary Italian breed, the maremmano-abruzzese sheep dog.

The breed is native to the Abruzzo region of east-central Italy. The dog is large, docile looking and affectionate with a thick white fur that somehow is “self-cleaning.” Their benign appearance belies a fierce combative spirit to defend the defenseless. At work the dog joins a flock and blends in with the sheep, virtually undetected.

The dogs are brave beyond belief. Whenever an approaching predator is spotted – a fox, wild boar or occasional bear – the dogs bolt from the flock and head straight for the would-be poacher either engaging them in battle or more often just frightening them away by their bark, speed and element of surprise.
The dogs are beloved by shepherds who have hardly ever lost a sheep.

The maremmano’s skill and bravery have attracted the attention of sheep farmers elsewhere including the United States, Canada and Argentina. The defense capability of the maremmano has been able to save other animals as well. A few environmentalists in Australia, as an experiment, imported two dogs to a remote island to help save penguins.
On rocky Middle Island off the coast of south-western Victoria, Australia, the dogs have been able to protect the nesting grounds of blue penguins, the smallest of 17 penguin species, allowing them to replenish their nearly depleted ranks by fending off fox predators.
Before the dogs arrived blue penguins numbered only 27, down from 2,000 in 1990. Now, after a few years, the flock has flourished and apparently few penguins have been lost to marauding foxes – except when dogs were not present.
Environmentalists are looking for even more possibilities to place the maremmano on other safety missions to defend other animals.

A dog with such skill and courage is an excellent choice for a football team that competes fiercely to defeat an opponent. The mascot with the characteristic light-blue Italian team shirt and holding a football seems poised for victory.
Knowing the capabilities of the breed, Italy’s cutest symbol appears set to crush opponents and settling for nothing but the coveted UEFA trophy. The Italian team was off to a good start, winning its initial match against Turkey, 3-0 on June 11. And winning also the second match against Switzerland with the same score.