Zhang Zhan and the Wuhan witnesses are role models

In the same year that two dissident journalists were awarded the Nobel Peace Prize, in recognition of freedom of expression, an independent Chinese journalist, Christian, Zhang Zhan, risks to die in prison. She, like all the other ‘citizen reporters’, had tried to document the beginning of the Covid-19 outbreak in Wuhan. They have been either been arrested or have gone missing. 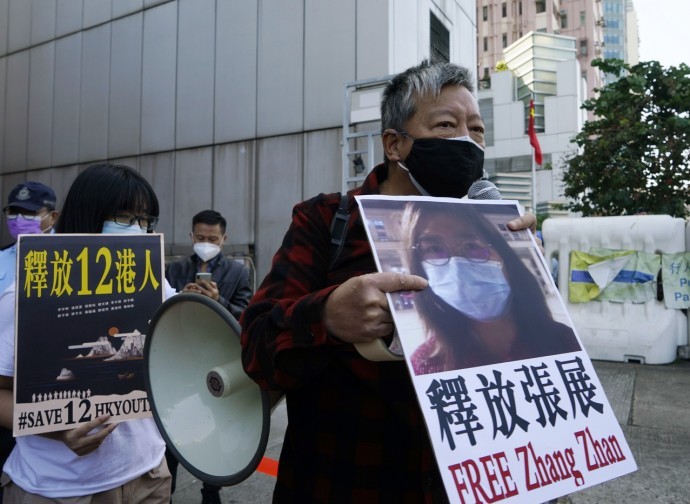 In the same year that two dissident journalists were awarded the Nobel Peace Prize, in recognition of freedom of expression, an independent Chinese Christian journalist, Zhang Zhan, is in danger of dying in prison, according to her brother Zhang Ju. The testimony, released to Voice of America and also reported by AsiaNews, confirms the dramatic situation of the ‘citizen journalists’ (non-professional journalists) who tried to document with photos and home made videos, independently from official media channels, the outbreak of the Covid-19 pandemic in Wuhan, in January 2020.

Zhang Zhan, according to her lawyers and according to what her brother reports, considers herself innocent and has gone on hunger strike to protest against the conditions of her detention. She is Christian and motivated by a strong faith, which is why her relatives fear that she will accept martyrdom rather than abandon her battle for truth. The prison authorities have decided to forcibly feed her, but nonetheless she weighs less than 40 kg. Her mother, Shao Wengxia, said she now regrets having cooperated with the police because she feels they tricked her. Zhang Zhan is a lawyer by profession. Like other lawyers, she has the "vice" of defending human rights. It has put her in conflict with the Chinese authorities since last year: in 2019 she was arrested because of her support for the Hong Kong pro-democracy protest. At the outbreak of the new epidemic (then it had not yet been named Covid-19), she moved from Shanghai to Wuhan to document what was happening there. She was arrested in May and sentenced to four years in prison the following December for spreading information that "creates disorder". According to Amnesty International, she was tortured for three months before her sentence.

The first wave of the epidemic in China, according to the Chinese authorities’ records, caused a low number of deaths. But, considering the country counts one and a half billion inhabitants, the virus was still unknown and circulated freely for at least three weeks before the authorities announced the emergency, many have questioned the credibility of this estimate. Whereas, the reports by Chinese ‘citizen journalists’ describe a reality hitherto not covered by the Chinese media. Although they have not provided numbers, their estimates, based on what they have seen, are far higher. There is talk of tens of thousands of deaths, in the city of Wuhan alone.

Both Zhang Zhan and other non-professional journalists, such as Chen Qiushi, Li Zehua and Fang Bin, circulated home made videos (like this one by Chen Qiushi) of hospitals over crowded with patients, lack of space, corpses in wards and a lack of organisation at all levels. What transpired above all was the lack of medical supplies. There were no swab kits and very few cases could be diagnosed. People with suspicious symptoms, even severe ones, had to wait or go to multiple hospitals in the hope of being admitted. And in the testimonies the timings are also suspicious: people had talked about the new virus since December, not only from January. Li Zehua became famous for having conducted his own investigation into the crematory ovens which, in the weeks of the pandemic, worked non-stop, producing more than 45,000 urns in the first two months of the epidemic in Wuhan alone. All of them were arrested. Fang Bing is still "missing". Chen Qiushi and Li Zehua were under arrest for months, sometimes only for health reasons: particularly long "quarantines" and under police surveillance. Instead, Zhang Zhan was tried and sentenced.

These arrested independent journalists speak directly to each of us and are role models; they tried to inform the world of a serious danger yet unknown. And their stories should be held up as an example to Western societies where, in the name of the fight against fake news (especially in the field of Covid-19) censorship is being invoked in an increasingly dangerous and explicit manner.