Yes to female "readers and acolytes," puts Diaconate in danger

By virtue of his motu proprio Spiritus Domini, The Pope's decision to modify Canon 230 opens the Lectorate and Acolytate to women as well. Down through the centuries, these have always been  ‘ministries’ conferred to males alone, because, like the other ancient minor orders, they emanate from the Diaconate. In this way,  having broken the bond with tradition, the latter can also be attacked. 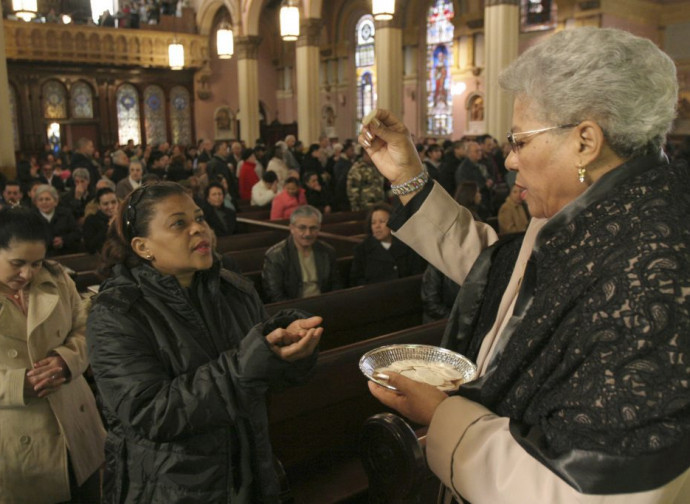 A bone thrown out to momentarily appease the hunger for female priesthood of the "German pastors" and South Americans? Or, conversely, a further step - according to the principles of the Overton window - to reach the female diaconate and then take the leap to what is forbidden?

Pope Francis' decision to modify, with the motu proprio Spiritus Domini, canon 230 §1 of the Code of Canon Law, must make one think. The previous version, which has now lapsed, limited the possibility of being instituted as lectors or acolytes to men alone; the new version, however, stipulates that all the faithful "lay people who have the age and gifts determined by decree of the Episcopal Conference," without excluding women, can take on these ministries on a permanent basis.

The demolition of the Minor Orders had begun in 1972, when Paul VI, with the motu proprio Ministeria quaedam, had established that, "since the minor orders have not always remained the same and numerous offices connected to them, as happens even today, have also been exercised by lay people, it seems appropriate to review this practice and adapt it to today's needs, so that the elements that have fallen into disuse in those ministries are eliminated, those that prove useful are maintained, those that are necessary are defined”. And so, sacrificed to this strange criterion of "today's needs" were the Ostiariate, the Exorcistate and, not without even greater perplexity, the Subdiaconate. The Lectorate and the Acolytate, on the other hand, have been maintained, although no longer as minor orders, i.e., "ordained" ministries preparatory to diaconal and then presbyteral ordination, but as instituted ministries, which any duly disposed male lay faithful can receive.

The opening up of these ministries to the lay faithful seems more in keeping with their historical origin: in the early Middle Ages, the status of cleric, and therefore access to these ministries, was not reserved to those who had embarked on the path to the priesthood. Instead, it was the Council of Trent, in its XXIII Session, that decided that these ministries should become "minor orders. The Council recalled that "from the beginning of the Church, the names of the following orders and the ministries proper to each of them were in use: subdeacon, acolyte, exorcist, lector, ostiary, although not with equal rank.

Moreover, the sub-deaconate is considered by the Fathers and by the sacred councils to be among the major orders; and in them we also read very frequently about the minor orders. For this reason, the seventeenth canon of this session took care to restore the aforesaid orders: "In order that the functions of the holy orders, from the diaconate to the ostiary, commendably received in the Church since the time of the apostles, and in many places long discontinued, may be restored to use according to the sacred canons, and not be criticised by heretics as useless, the holy synod, earnestly desiring to restore that ancient custom to use, decrees that in the future such ministries shall not be exercised except by those who are constituted in these orders." And it required that the first four (the Ostiariate, the Lectorate, the Exorcistate and the Acolytate) be conferred preferably on celibate clerics, in the absence of whom, men could be chosen; i.e  "married men of honest life, suitable for these offices, provided they are not bigamous and on condition that they wear the tonsure and the clerical habit in church"..

Years go by and, who knows why, some of these functions "praiseworthy in the Church since the time of the apostles" no longer find a place in the Church of the 20th century, not even within the seminary curriculum (with the exception of the "traditional" institutes)...

What is important to underline is that these ministries have always been conferred to men only: the motu proprio therefore appears as a unicum in the history of these orders. There is no misogyny in the traditional practice; the motivation for this election is explained by St. Thomas Aquinas: "in the early Church, because of the scarcity of ministers, deacons were entrusted with all the lower ministries [...]. Later, however, divine worship was enlarged; and what the Church had implicitly in one order, was entrusted explicitly to several other orders." (Super Sent., lib. 4 d. 24 q. 2 a. 1 qc. 2 ad 2). Thus, the minor orders emanate from the diaconal order, like rivulets of water from their source, though distinct from it. It was therefore natural that the candidates for these "orders" should be male and, preferably, celibate candidates (for more on the question of masculinity and celibacy, see the book published by the Nuova Bussola  “Vi dichiaro celibi e casti”).

The rationale for these minor orders and their historical origin, including the Lectorate and Acolytate, thus lies in the fact that they are in some way connected to the ordained Diaconate. Opening these ministries to women, therefore, was either a superficial operation that forgot this connection (or deemed it grossly superfluous), or one knew it very well and carried out the operation like towers ready to besiege the citadel of the Diaconate. In either case, the signs of the decadence, or rather, the decomposition of Catholicism are advancing.

It is certainly difficult to understand how the Pope can affirm that "a consolidated practice in the Latin Church has confirmed, in fact, that these lay ministries, since they are based on the sacrament of Baptism, may be entrusted to all suitable faithful, whether male or female, in accordance with what is already implicitly provided for by Canon 230§2”.  This affirmation is clearly incorrect: the aforementioned canon text was in fact preceded by §1, which made it explicit that the candidates for the stable ministry should be only "male laymen (viri laici)", the last relic - evidently considered an obsolete relic - of that link with the Diaconate. The truth is that there is no practice in the Church of conferring such established ministries to women: the Pope used the questionable custom of altar girls and temporary readers to knock down another bastion placed in defence of the male Diaconate.