Xenotransplantation and pig hearts, the answers to ethical doubts

The world witnessed the first pig heart transplant in Maryland last week, but is it legitimate to put an animal heart in a person? It is, if certain conditions are respected. In fact, not all animal organs are morally transplantable because, in addition to the possible negative side effects, there is the identity of the person to be considered. The Magisterium comes to our aid on the subject. 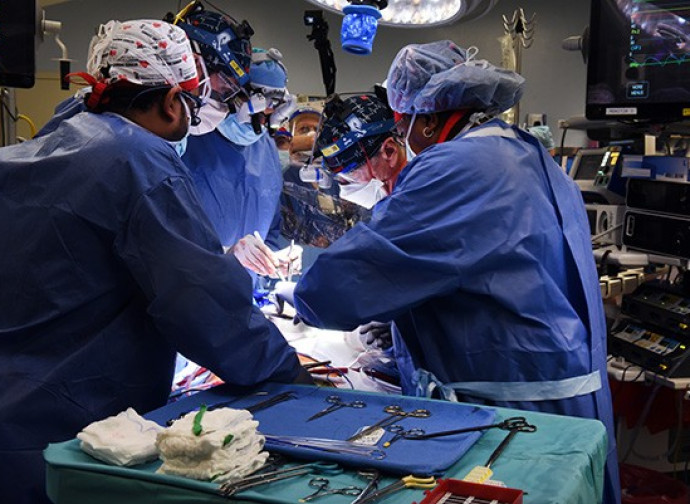 There are those who have the heart of a lion and those of a pig, but this does not mean necessarily that they have less courage. Like Mr. David Bennett, who lives in Maryland and who, despite finding himself in a tight corner due to the shortage of hearts, nevertheless had the firmness of mind to accept a heart transplanted from a pig. The alternative was death. Dr. Bartley Griffith, director of the transplant program at the Baltimore Medical Center and the surgeon, said: the heart "works and looks normal but we don't know what might happen from now on, it has never been done before." The heart, in fact, was genetically modified above all to avoid rejection. An animal heart had to be used because of the shortage of human organs available for transplant.

The pressing question: is it legitimate to transplant an animal heart into a person? It is, but only if certain conditions are met. Another question: is it legitimate to transplant any organ from an animal into a human being? The answer in this case is categorically no. So, let’s consider what the reasons are for these answers.

As a preliminary point, it needs to be remembered that organ transplants, both from human to human and from animal to human (xenotransplantation) and artificial (example: an artificial heart), are in themselves legitimate because both pursue the ethically good goal of curing. Still, when an action is evaluated that is in itself good, the possible undesirable effects must also be taken into account, that is, the positive and negative effects, benefits and harms must be weighed against each other. A self-evident case: if the transplant, intended to avoid death, would lead to a general deterioration of the person’s quality of life, it would not be reasonable to operate, it would not be ethically legitimate to subject the person to the medical procedure.

Let's focus specifically on xenotransplantation. In addition to the usual negative effects of any medical procedure that must be taken into account, an important limitation to this type of transplant concerns the person’s identity. The violation of personal identity is possible on an objective level, entailing something intrinsically evil, and by subjective action. Let's start from the first aspect: personal identity would be violated if organs, tissues or chromosomes linked to the patient's unicum were transplanted (in addition to the fact that, in the case of gonadal transplantation, the person could generate a child that is not biologically their own: a strange case of heterologous achieved through sexual intercourse).

The nature of the action would change: from a therapeutic action to a violation of personal identity. As in human-to-human transplants, also in animal-to-human transplants it is not permissible to transplant organs that affect the physical identity of the person: the brain, face, gonads, sex chromosomes. Some physical elements are necessarily connected to a persons identity, they form it. This is the reason not all organs can be transplanted.

But who, for example, would want a monkey’s brain. Probably someone who already has the brain of a monkey, that is, who thinks like a monkey and would now like to perfect their physical resemblance from human to ape. Joking aside, in the future, xenotransplantation may be the natural evolution (or involution) of the phenomenon of transsexualism. If the transition between the sexes is lawful, why should transition between species be reprehensible? If today a male can use surgery because he wishes to look like a female, nothing excludes the possibility in the future a person, always with the same help of surgery, might want to be a monkey, a cat, a dog. And it isn’t unheard of today, Mrs. Jocelyn Wildenstein is such a person, she has already changed her appearance to resemble a feline.

But let's return to the subject of xenotransplantation for therapeutic purposes. There may be a vulnus in the sphere of a person’s identity also on the subjective, ie psychological, level. Heart transplantation, for example, does not objectively affect, that is, by its nature, the identity of the person (it is not an intrinsically illegitimate action), but from a subjective angle, it might be. Some heart transplant patients - while others not - could have serious problems accepting another person’s or an animal’s organ, because they would have the perception of being "distorted", no longer themselves, of living with an intruder in their body. This refusal, however, should be overcome when life is at stake.

The rationale of the arguments articulated above also finds support in the Magisterium. First of all, there is a citation from an excerpt by His Holiness Pius XII's Address to the members of the Italian Association of Donors of Cornea and of the Italian Union of The Blind in 1956: "It cannot be said that every tissue transplant (biologically possible) between individuals of different species is morally reprehensible; but it is even less true that no heterogeneous, biologically possible transplant is forbidden or that could raise objections. It is necessary to distinguish specific cases and examine which tissues or which organs need to be transplanted. The transplantation of animal sex glands on humans must be rejected as immoral; on the contrary, the transplantation of the cornea from a non-human to a human organism would not entail any moral difficulty, if it were biologically possible and indicated. If the absolute moral prohibition of transplantation were to be based on the diversity of species, it would logically be necessary to declare cell therapy, currently practiced with increasing frequency every day, to be immoral. Live cells are often taken from a non-human organism and transplanted into a human organism, where they exert their action ".

John Paul II was also interested in the topic and referred to what Pius XII had already stated: “In principle, he [Pio XII] stated, for a xenotransplant to be licit, the transplanted organ must not impair the integrity of the psychological or genetic identity of the person receiving it; and there must also be a proven biological possibility that the transplant will be successful and will not expose the recipient to inordinate risk” (Address of The Holy Father John Paul II to The 18th International Congress of The Transplantation Society in 2000).

Finally, we cite the Message of the Holy Father John Paul II to the participants in the study conference organized by the Pontifical Academy for Life on the lawfulness of xenotransplantation in 2001 which emphasizes both the reasons that lead to xenotransplantation and the fact that animals are at the service of humans, albeit with due respect for creation: “The goal of your work is, first of all, of human interest, since it is prompted by the necessity of resolving the problem of the grave insufficiency of human organs which are suitable for transplants:  it is known that such an insufficiency means the death of a high percentage of sick people on waiting lists, who could be saved by the transplant. The transplants could prolong a life which is still good. Certainly the passing of animal organs and tissues to people through transplants implies new problems of a scientific and ethical nature. You have raised these problems with responsibility and competence, simultaneously taking to heart the benefit and the dignity of the human person, the possible medical risks, which are not always quantifiable or foreseeable, the attentive consideration for animals, which is always a duty even when they are operated on for the greater good of man, who is a spiritual being in the image of God. (...) Rational reflection, confirmed by faith, discovers that God the creator has placed man at the summit of the visible world”.