"Wyszyński defended the Church and Poland from Communism"

The Polish Parliament has decreed that 2021 will be celebrated throughout the nation as the Year of Cardinal Wyszyński, future Blessed. "The Primate led us through the tragic years of Communism," revealing himself to be "the man of Providence." Imprisoned by the ‘Red’ regime, he "endured everything heroically." "He worked side by side with Wojtyła, and upon the latter’s election to the See of Peter, he said, 'It was Our Lady who did it!'". The Daily Compass interviews Poland's ambassador to the Holy See, Janusz Kotański. 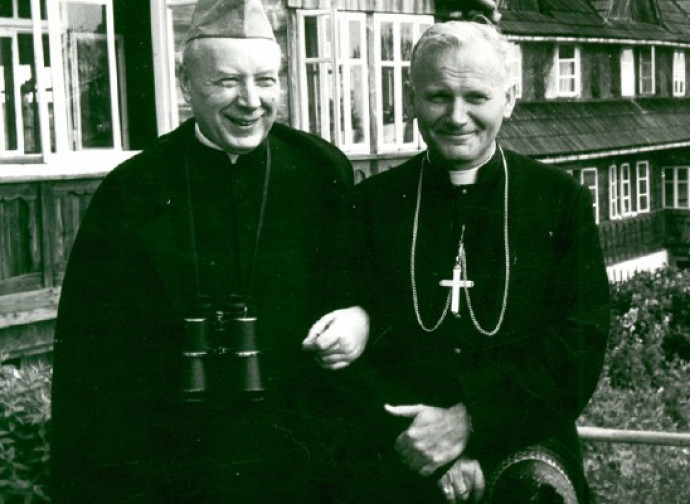 “This Polish Pope, who today begins this new pontificate full of fear of God, but also trust, would not be on the  See of Peter if there had not been Your faith, which did not bend before prison and suffering, Your heroic hope, Your trust in the Mother of the Church to the end". These words of John Paul II addressed to Cardinal Stefan Wyszyński (1901-1981), Primate of Poland, in the Letter to the Poles dated October 23, 1978, gives an idea of how important Wyszyński was in the life of Karol Wojtyła. The bond between the two was also emphasised by Benedict XVI, who, in the homily of the Mass celebrated in Piłsudski Square in Warsaw on May 26, 2006, said: "God united these two persons not only through the same faith, hope and love, but also through the same human events which have linked both of them so strongly to the history of this people and the Church living in it”.

Recently, both chambers of the Polish Parliament - the House and the Senate - resolved that 2021 will be celebrated as the Year of Stefan Wyszyński. The respective resolutions emphasise the contribution of the "Millennium Primate" in the service of God and country. This year marks the 120th anniversary of his birth and the 40th anniversary of his death. Also awaited is his beatification, which was supposed to have taken place on June 7, 2020 in Warsaw, but was postponed due to Covid-19.

To learn more about the figure of the future blessed, the New Compass interviewed the Ambassador of Poland to the Holy See, Janusz Kotański, historian and author of a book on Wyszyński.

Cardinal Stefan Wyszyński lived almost all of the 20th century with firsthand knowledge of Communism and Nazism, just like Karol Wojtyła. How did this fact influence this figure?
Wyszyński was a charismatic pastor and distinguished statesman, a staunch defender of the Church and the Polish nation, and therefore called the "Primate of the Millennium." He led us through the tragic years of Communism, playing the role of a true interrex, the man of Providence for Poland. He had had to deal personally with Soviet Communism as early as during the war with Soviet Russia in 1920. Fortunately, the "Miracle on the Vistula," or the victory of the Poles at the Battle of Warsaw, saved Europe from the Bolsheviks for the next twenty years. Wyszyński saw the spiritual dimension of the clash that pitted Christianity against Bolshevism, in which Poland was on the front line, again in the role of antemurale Christianitatis.

The Pope also condemned communism....
Yes, he did. Monsignor Wyszyński welcomed with joy the encyclical Divini Redemptoris published in 1937 by Pius XI. In an article he emphasised: "Its central message is that Communism cannot be reconciled with Catholicism. (…). Since the threat of Communism looms over everyone and insinuates itself into all aspects of life, Communism must be fought by uniting all the forces of society."

From 1939 to 1945 Poland was occupied by the Nazis. But at the end of the war the country did not regain its independence because it became part of the Soviet bloc. What was the fate of the Church and of Monsignor Wyszyński under the Communist regime?
First of all, already in 1945 the Polish Communists unilaterally abolished the Concordat. The regime’s propaganda machine sought to attack Pius XII incessantly. Bishop of Lublin as of 1946, Wyszyński also spoke out in open defence of the Pope. He acted in a prudent and pragmatic fashion, and, whenever possible, sought to ease tensions. In 1948 Pius XII wanted him to become Metropolitan Archbishop of Gniezno and Warsaw, that is, Primate of Poland. At that time, the Church throughout Eastern Europe was in a tragic situation, with thousands of clergy imprisoned and interned in labor camps. The most rebellious ones were tortured or killed secretly in the wake of sham trials.

What did this agreement stipulate?
Thanks to that agreement, the Church obtained certain guarantees: maintenance of religious instruction in schools, maintenance of existing Catholic schools, permission to publish Catholic newspapers, permission to provide pastoral assistance in hospitals and prisons. Most important was the fifth paragraph of the Agreement: "Principle, according to which the Pope is the authoritative and highest authority of the Church concerning matters of faith, morality and ecclesiastical jurisdiction."

Did the regime respect the agreement?
Unfortunately, it didn’t: in the Constitution of 1952, the rights of citizen-believers were not guaranteed, seminaries and noviciates were closed, repression and persecution became worse. The Primate did not give in and, taking risks, did what he could. He was saved from arrest by his appointment as a cardinal, proclaimed by Pius XII in the fall of 1952.

Did the cardinalate strengthen the Primate's position?
Undoubtedly it did, but the Communists continued the battle against the Church: on February 9, 1953, the regime issued a decree stipulating that ecclesiastical appointments had to be authorised by state bodies. According to the intentions of the Communist authorities, this move was intended to deal the death blow to the independence of the Church in Poland.

But in March of that year Stalin died. How did the policy of the Polish communists change?
It did not change, so on May 8, 1953, the Episcopate, at the urging of Wyszyński, published a famous memorial noting that the situation of the Church in Poland was worsening, and pronouncing the following memorable words: "The things of God cannot be offered on the altars of Caesar. Non possumus!".

How did the Communist authorities react?
Wyszyński was aware that he risked prison or even death as a result of this explicit stance. And the regime, after consultations with the Kremlin, decided to arrest him. He was arrested the night of September 25, 1953, and held in a series of prisons in isolated confinement and worse than horrible conditions. But he endured everything heroically. During his imprisonment, the Primate devoted himself to prayer and writing, and it was precisely during those years that he drafted the programme for the Great Novena of the Millennium of the Baptism of Poland (1966).
The demands for the release of the Primate of Poland became more and more insistent, and Władysław Gomułka, the new First Secretary of the Communist Party, finally had to yield: on October 28, after three years of imprisonment, Card. Wyszyński returned to the capital. The Primate tried to reach an understanding with Gomułka, but the differences in their understanding of the freedom of the Church and the individual, the essence of democracy, were insurmountable.

Paul VI wanted to visit Poland in 1966 on the occasion of the Millennium of the Baptism of Poland...
Yes, but the Communists did not consent to such a trip.

During the celebrations of the Millennium, the Archbishop of Krakow, Karol Wojtyła, always appeared alongside the Primate. What were relations like between these two great figures of the Polish Church?
It should be noted that the Communists tried to sow discord between Wyszyński and Wojtyła. They thought that Wojtyła, younger, actively involved in the Second Vatican Council, and more "modern", would be more conciliatory. They were very wrong, because the two worked side by side, also when Wojtyła was made a cardinal in 1967.

And finally the day dawned, October 16, 1978. How did the Primate react to the election of Karol Wojtyła as Pope?
Wyszyński then said, "It was Our Lady who did it! It is Her work!"

Already the following year, John Paul II wanted to visit his homeland, welcomed by the Primate. What did that trip mean for Poland?
The Pope's first trip to Poland in June 1979 changed the "face" of Poland. On that occasion John Paul II defined Wyszyński as "a providential person for the Church and for the country". The seed sown by the Pope in his homeland fell on fertile ground: the following year, the trade union "Solidarity" (“Solidarność” the first free trade union in the Soviet bloc) was founded, thanks in part to the support the workers received from the Primate, who considered the demands of civil liberties and the right of association to be legitimate.  The Cardinal supported "Solidarity," but what he wanted first and foremost was a profound transformation of society in a truly Christian spirit.

Wyszyński kept a close eye on the situation in the country, but he was now very ill. On 3 May, the feast of Our Lady, Queen of Poland, he had a telephone conversation with John Paul II. His condition worsened on May 13 because the terrifying news of the assassination attempt on the Pope had arrived from Rome. Wyszyński died on 28 May, and the Holy Father, recovering at the Gemelli Hospital, followed the funeral ceremony on the radio. The Pontiff paid homage to him personally on the occasion of his pilgrimage to his homeland in June 1983, saying: "He was a tireless herald of the dignity of every man and the good name of Poland among the nations of Europe and of the world. [...] Let us pray to the King of centuries that nothing may destroy this profound foundation that he was entrusted to establish in the soul of the People of God  throughout Poland".

Almost forty years after the death of Card. Wyszyński, is his memory still alive?
Yes, the memory of the Primate of the Millennium is ever alive in Poland, and his cult continues uninterruptedly. Every time I am in Warsaw, I light a candle at his tomb in the cathedral and pray for the beatification of this great pastor of the Church.