There has long been talk of uterus transplants for men who feel like women. Some justify it in the name of 'equality'. But encouraging this change - contrary to nature - increases the discomfort of trans people, because it widens the gap between biological data and psychological perception. 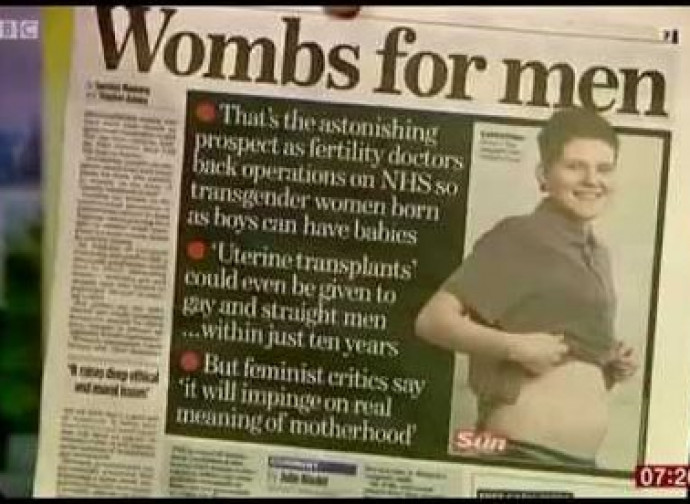 The first birth after a womb transplant took place in Sweden in 2014. An absolutely morally lawful practice. But when the recipient is not a woman, but a man, it’s a different issue.

For some time now, there has been talk of uterus transplants for transsexuals, i.e. men who believe themselves to be women. The International Family News (IFN) portal reports that such transplants could be successful in five to ten years. Nicola Williams, Professor of Human Reproductive Ethics in the Department of Politics, Philosophy and Religion at the University of Lancaster in the UK, candidly states: “There are certainly sufficient equality-based reasons to consider uterus transplants in transgender women”. Laura O'Donovan, a research associate working at Lancaster University, adds that under the Equality Act, the law against discrimination, refusing a transgender person a womb transplant could be considered illegal in the future.

The reasoning would be as follows: mother nature made Tom male, therefore different from a female. But if Tom feels female, it would be discriminatory for his body not to adapt to his perception. Hence, breasts sprout, the penis is removed, and now a uterus is implanted. All to change not a sick reality, but a healthy one, rejecting instead what is actually disturbed, the mind.

To encourage a change contrary to nature is to foster the discomfort that has been the trigger for change in transsexual people, because the more we push men to believe they are women, the greater their despair will be, since the gap between biological data and perceived psychological reality will be greater. A large proportion of trans people think that by changing their appearance and physique they will overcome the inner discomfort of feeling in a wrong body, but the wound in identity is not healed by 'changing' sex, but by accepting themselves as they are, including their genetic sex. The illusion that the manipulation of one's body to make it female is capable of opening the door to a happy life is well attested to by the study Perceptions and Motivations for Uterus Transplant in Transgender Women in which more than 90% of the transgender 'women' interviewed believe that with a womb transplant their quality of life will improve and the psychological discomfort of so-called gender dysphoria will be alleviated.

Womb transplantation for trans people highlights how certain social phenomena are intersecting, uncovering a common cultural root. The uterus for rent is the antechamber of womb transplantation for trans people, it is the ideological precedent at the service of gender theory. In fact, the uterus for rent separates gestation from motherhood. The womb becomes a mere shell for generation, a flesh incubator, an instrument of reproduction that can be used even by those who are not genetic mothers, or by those who will raise the child that will be born. Having disengaged the uterus from motherhood, the next step is to disengage it from womanhood. If the uterus is a mere tool and can be used even by someone who is not the biological mother of the unborn child, why could it not also be used by a male? The womb becomes sexually neutral because it was previously parentally neutral. The womb is transformed into a medium for anyone's motherhood, a maximally inclusive instrument and organ for the affirmation of one's identity, whether real or presumed.

The abortionist feminists shrieked in the years of the '68 revolution (and even today) that the uterus was theirs, thus reifying their femininity because they preached the possession of the main organ of reproduction. They thus materialised, objectified an organ that as such must now be made available to anyone who asks for it. The person is reified because they can be disassembled into various pieces that can then, like Frankenstein, be assembled by combining male parts with female parts. It is man's autopoiesis [self-creation], a grotesque attempt to mimic creation. And so the liquefaction of natural anthropology involves a perfect fusion not only of social roles, but also of organic functions. Social egalitarianism leads to somatic egalitarianism.