Withdrawing troops from Afghanistan spells defeat for the West

The U.S. has apparently taken the final decision to withdraw all its armed forces from Afghanistan. The symbolic date to complete the operation is September 11, 2021, the 20th anniversary of the terrorist attacks on New York and Washington. Meanwhile on the ground, the Taliban are not defeated and local armed forces are not prepared. Therefore, this spells defeat. 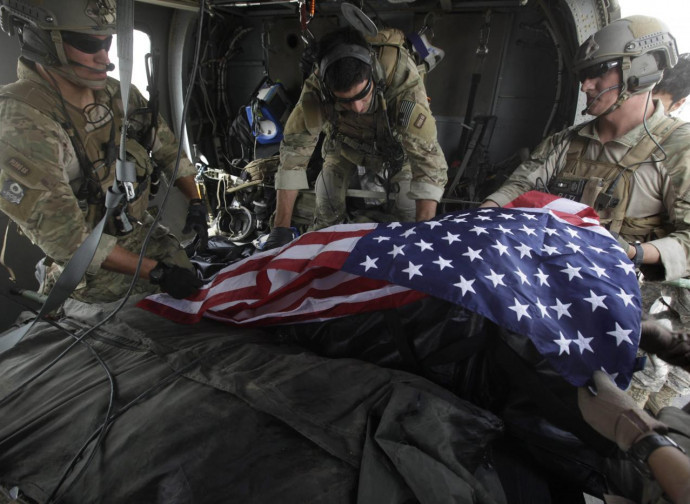 The United States has apparently made a final decision to bring home all its  remaining 3,500 troops in Afghanistan following gradual withdrawals that had been already ordered by the Trump administration. President Joe Biden has just announced he will withdraw all troops by September 11 of this year, a postponement of more than 4 months from the date of May 1 established in the agreements made in Doha (Qatar) with the Taliban in February 2020.

"We will begin an orderly drawdown of the remaining forces before May 1 and plan to have all US troops out of the country before the 20th anniversary of 9/11," a senior U.S. official explained, adding that President Biden will not impose conditions on the Taliban or the Afghan government in order to complete its withdrawal. Currently, there are roughly 3,500 U.S. soldiers deployed in Afghanistan: 2,500  are assigned to NATO's Operation Resolute Support which involves 7,000 soldiers from 36 Coalition Nations (including 750 British, 860 Georgian, 890 Italian and 1,300 German armed forces) who train and support troops in Kabul. In addition, there are 1,000 soldiers in the Special Forces Command who conduct operations against jihadist militias within the framework of Operation Freedom Sentinel, the successor to Enduring Freedom launched by President George W. Bush.

Yesterday Secretary of State Antony Blinken said it was time to pull out all American troops from Afghanistan. "We have achieved the goals that we set out to achieve. And now, it is time to bring our forces home," he said, announcing that together with NATO, the U.S. will continue working for security in Afghanistan. It is at least paradoxical for Washington to claim that its objectives have been achieved since the Taliban have stopped attacking allied troops, but nevertheless have increased their attacks on Afghan soldiers and civilian representatives of the Kabul government.

The new date assigned for ending the U.S, military commitment in Kabul obviously has a symbolic value, since it coincides with the twentieth anniversary of the September 11, 2001 Twin Towers terrorist attacks in New York. These attacks spurred the American invasion of Afghanistan which, in November of that same year, brought about the fall of the Taliban regime. However, more than anniversaries, the White House should be concerned about the impact its decision will have on the Afghan government and its military forces who have little chance of resisting Taliban attacks without the presence of allied troops.

It is no coincidence that the announcement of withdrawal from the longest conflict in U.S. history has provoked bipartisan criticism from Congress that was already heard when Donald Trump's plan was first made public. Senate Republican Minority Leader Mitch McConnell said that Biden has made a "grave mistake" and that it is "a retreat in the face of an enemy that has not yet been vanquished"...  abandoning our partners and retreating in the face of the Taliban". He slammed the decision as part of a "hasty withdrawal of forces” and that “a retreat in the face of an enemy that has not disappeared is a surrender of American leadership." Senator Lindsey Graham joined McConnell in calling the U.S. withdrawal a "disaster in the making," "irresponsible," and "dumber than dirt." Criticism also came from Democrats, with Senator Jeanne Shaheen of the House Foreign Affairs Committee stating she was "very disappointed" in Biden's decision, considering the risk of abandoning Afghans, particularly women, on the human and civil rights front. "The U.S. has sacrificed too much to bring stability to Afghanistan to leave without verifiable assurances of a secure future," she added. Softer on President Biden than other Democratic senators was Patrick Leahy who said, "What other choices did he have? There were no good choices available." Enthusiasm was expressed by far left wing Democratic Party leaders Bernie Sanders who called Biden's decision  "brave and fair" and Elizabeth Warren who said she supports "strongly the president's commitment to withdraw all troops from Afghanistan." Senator Chris Murphy tweeted, "The Endless War cheerleaders have been saying for 15 years that if we just stay in Afghanistan a little longer, the Taliban will give up and the Afghan government will get their act together. And they will say it for the next 15 years if we leave our troops there indefinitely,”  Barbara Lee, a California congresswoman who was the only one to vote against that war in 2001, cheered: "We're finally doing the right thing."

The U.S. withdrawal leaves no alternative for its NATO allies who certainly don't seem willing to remain alone in and around Kabul. Germany's Defense Minister, Annegret Kramp-Karrenbauer, said NATO countries will pull out together with the U.S. "We have always said we are going in together, and we are going out together. I stand for an orderly withdrawal, and I expect us to decide this today," she said, referring to the NATO ministerial summit.

In military terms, no one has any illusions: the chance that repatriating both U.S. and its allies' troops will lead to the end of hostilities is a very remote one. On the other hand, the withdrawal of allied troops no doubt goes hand in hand with the withdrawal of a huge number of US contractors in charge of the maintenance and efficiency of 100,000 vehicles,  aircraft and weapons systems supplied to the Afghan security forces and responsible for the training of Kabul soldiers. As explained by Pietro Orizio on Defense Analysis, "Since the agreement with the Taliban, the number of Defense Department contractors in charge of logistics and maintenance has decreased by 40.49%, while the number of trainers has decreased by 12.31%. Currently there are 5,559 contractors dealing with logistics and maintenance and 1,133 with the training of Afghan forces." Their number will drop rapidly in the coming months, when the drawdown of U.S. military will also reduce the security conditions of contractors and in view of the expiry, in 2022, of maintenance contracts that from next year should fall entirely on Afghan personnel. This is an unrealistic goal since with the gradual withdrawal of allied troops in recent years the autonomy of the Afghan military in managing maintenance and logistics has even worsened. Just think that in November 2018 the Afghan National Army was able to carry out 51.1% of the maintenance of its vehicles, while the Afghan National Police only 15.9%. By December 2020, the Army was not even capable of 20% and police barely over 12%, when the expected targets of the U.S. command in Afghanistan included 80% and 35% responsibily, respectively.

Pulling out all allied troops therefore makes it increasingly difficult for Afghan forces to withstand Taliban offensives who control over half of the country's rural areas. The withdrawal of contractors is likely to lead to the paralysis of military assets, effectively preventing the army from maintaining its combat capabilities. It is hard not to consider that once the U.S. and its allies are gone, the Taliban might regain control of Afghanistan in the very short term. Should this happen it would seal the resounding defeat of both Washington and NATO, but above all the defeat of Western powers that have once again proven themselves incapable, in political and social terms, more than militarily, of sustaining even a low intensity conflict over a long period of time.

It is better to remember that the Afghan war was actually lost in 2010 when Barack Obama authorized the sending of further reinforcements, announcing however that from the following year the gradual withdrawal would begin. Obama's announcement gave new life to the Taliban's efforts after three years of its bitter defeats on battlefields. In 20 years, the Afghan war has cost the lives of 3,600 allied soldiers (2,500 of which were American, including victims of accidents and suicide). This toll amounts to an average of 180 casualties per year of NATO troops and those of other allied nations who together have deployed well over 4 million soldiers. These indeed are telling numbers regarding the West's "resilience" to wartime efforts. For this same reason, the definitive withdrawal of soldiers from Afghanistan constitutes an unprecedented jihadist victory that will surely have a major impact on Islamic militias, encouraging them to continue and strengthen the fight against whom they consider infidels.