With financial industries up and economies down, savers will pay

Financial industries are soaring amid sinking economies. "Economic financialization", with rivers of fiat money flowing out of central banks and pumped into global markets, underscores the imbalance existing between financial and real market dynamics. We are quickly moving toward "financial socialism" which will end up destroying what little is left of our freedom and economic responsibilities. But can we stop it? 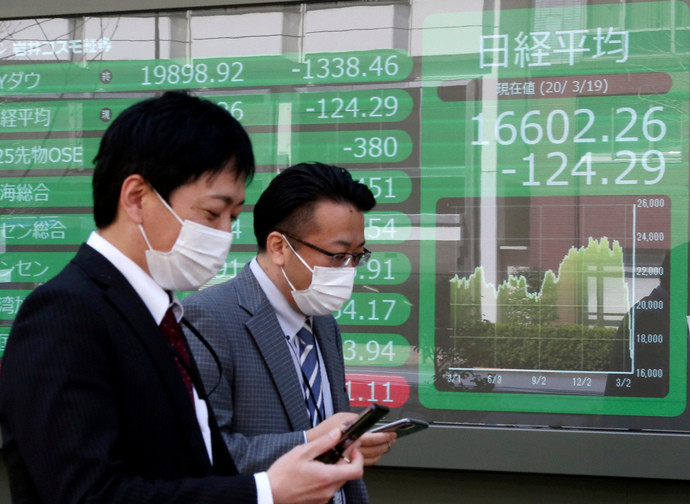 With the spread of the COVID-19 pandemic, from the end of February we have witnessed a real meltdown of financial markets. Stock exchanges have tumbled 35%-50%. There have been very strong tensions over high-yield bonds and among emerging markets. Sovereign debt crises have been exposed, as in Italy. There have been huge drops in prices related to raw materials, primarily oil, as well as steep declines in currencies pegged to commodities. Since mid-March, despite the ongoing health emergency, worsening global economic outlooks, and growing uncertainty about the timing and methods of recovery, financial markets, nevertheless, have shown signs of broad V-shaped recovery. On average, this has allowed stocks prices to return to pre-COVID peaks.

The giant financial bubble, created by central banks’ ultra-expansionary monetary policies, especially since the 2007-2009 Great Recession, was, indeed, popped by the sharp crown of COVID. This bubble, however, has been blown right back up again thanks to trillions of dollars of additional liquidity injected into financial markets over the last quarter. With a sharp worsening in the real economy, the current market bubble now causes us much more concern than the previous one.

To stabilize financial systems, central banks are buying up as much as they can: from distressed government bonds (e.g. Italian titoli di stato) to private debt securities, including those that are now post-COVID junk bonds. Central banks are continuing the artificial compression of bond yields towards and below zero. To avoid de iure  defaults, ultra-expansive monetary policies aim to deflate gigantic debt bubbles, worth around $250 trillion in "real" terms globally (i.e. net of 2% projected annual inflation). This will amount to an unprecedented "financial repression" in which savers, for years to come, will be deprived of equitable returns on their investments and with the risk of seeing them also fall in real terms due to simultaneous "zero nominal interest rate” inflation.

In short, savers must continue to finance spendthrifts, without even being fully aware that they are doing so. Without "real" savings - not liquidity created ex nihilo - investments cannot be sustained which, in turn, will block market productivity and, therefore, growth expectations in terms of "real" wages and salaries. Pushing Keynesianism on consumption – and leading ultimately to debt - only postpones accounting for the real problem.

What lesson can we learn for all this? Central banks are effectively nullifying risk perception and pushing us ever more in the direction of moral hazard. Financial markets risk becoming huge casinos in which potential profits fall into the hands of gamblers while losses are passed on to the community. This is a sort of "financial socialism" that deeply distorts the rules of the game and which discourages savings while encouraging consumer debt and bad investments.

Thus, as the Austrian school of economics teaches us, economic cycles are defined by boom cycles followed ever faster by busts (regarding the latter, we are already in our fourth crisis in twenty years) . Moreover, as we said, there are "opaque" and totally unjustified transfers of wealth which lead to increased social inequalities, since they tend to penalize, particularly, the middle class.

As we say in Latin "motus in fine velocior" (time moves faster at the end of an era), we are witnessing an unprecedented acceleration of post-COVID liquidity injections (over $6 trillion in just one quarter). This suggests that the credit expansion cycle is heading towards its terminal phase. Central banks simply cannot create wealth from thin air. They can give liquidity, but not grant solvency. They still could - going against their own mandates - directly buy stocks, junk bonds, government bonds on the primary market. In short, they could proceed toward executing a gigantic bail-out of debtors to save zombie businesses from unfair competition with healthy ones.

This would definitively alter the “price discovery” process, which is essential for the correct allocation of "real" resources scarce by definition. Central banks could put fiat currency (i.e. “helicopter money”) in the pockets of citizens while attempting an inflationary exit out of the crisis, just like what happens after wars. If not, they could apply negative nominal rates on bank accounts. Furthermore, they could penalize use of cash and introduce digital currencies with highly negative nominal returns, thus leading to a complete centralization of financial systems by way of the central banks themselves.

But then what? In short, the systemic weaknesses which were already clear before the COVID crises began, have only increased due to the latest central bank interventions. These very banks now no longer know how to get beyond the impasse in which they find themselves.

Among the "cures" we can add elevated increases in public debt expenditure by governments. It is a pity governments can create wealth out of nothing. Therefore, their "supporting" interventions always correspond to an increase in implicit taxation. The latter fiscal burden, however, quickly becomes explicit, thereby increasing the share of national income managed directly by governments across the country by various local politicians and the bureaucracies they manage. The more public spending grows, in fact, the more ties to cronyism increase. This to the detriment of sectors and businesses who do not collude with political powers that break rules of free and fair competition. Added to this is the profound effect of removing a sense of responsibility throughout society while becoming increasingly dependent on public "support" policies.

Crises, as history informs us, always lead to a concentration of power. Unfortunately, this usually happens with the consent of partners who willingly give up their liberty in exchange for the illusory hope of obtaining greater security in return. Crises tend to constrict subsidiarity, ironically at a time when only decentralization would provide targeted responses to particularly needs.

All this falls into a context of deep demographic crisis in most developed countries. This will entail serious increases in pension and health expenditures in absolute terms and even more in relation to a contracting working-age population due to the collapse of rapidly declining birth rates over the last few decades.

The paradigm of debt growth and “at will” monetary expansion seems to be coming to an end. It should be clear to everyone, at least, that “real” problems cannot be resolved “monetarily.” A monetary vaccine will not cure an economic virus: we have entered the final phase, a sort of "Indian Summer", which is not actually summer.