Will Zen be sacrificed to maintain the China Accord? The Vatican’s Dilemma

The Vatican’s strong reaction against Israel regarding the incidents during the funeral of the Palestinian journalist are in stark contrast with the Holy See’s approach towards China, after the arrest of Cardinal Joseph Zen in Hong Kong. Their feeble statements betray a conception of diplomacy which is prepared to sacrifice the dignity of individuals on the altar of political objectives. Prominent Hong Kong figures are welcoming the Vatican’s abandonment of Cardinal Zen and all those who share his positions. 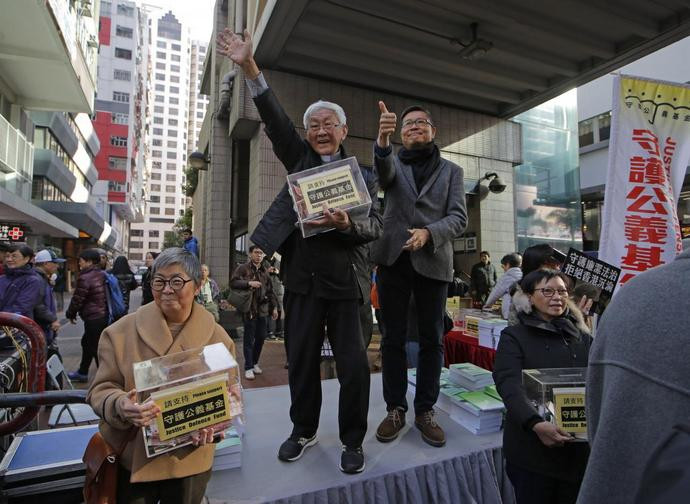 The Vatican’s reaction to the recent events in Jerusalem, when the Israeli military savagely beat Palestinians attending the funeral of the (Catholic) journalist of Al Jazeera, Shireen Abu Akleh, enables us to better understand the gravity of the position taken by the Holy See to the arrest of Cardinal Joseph Zen in Hong Kong on 11 May.

In the first instance, the response of the Vatican was immediate and strong:  Father Thomas Grysa charged with the affairs of the Apostolic Delegation in the Holy Land, stated clearly that the Israeli police “violated the Church’ right to religious freedom, in a brutal manner, including those fundamental agreements already established between Israel and the Holy See”. He went on to denounce repeated episodes which serve only to increase “the tensions between Israel and the Holy See”. To say nothing of the declarations of the Latin Patriarch of Jerusalem, Monseigneur Pierbattista Pizzaballa, and of other leaders of the various Christian denominations.

None of this holy fury, however, has been reserved for the case of cardinal Zen, who, although liberated on bail, will have to reappear on 24 May before a local Court, risking yet another incarceration. The profound concern expressed by the diocese of Hong Kong has been met substantially by an embarrassed silence on the part of the Holy See. The first,  rather laconic statement produced by the Vatican Press Room, – forced at the behest of inquiring journalists -spoke simply of concern, and that they would follow any developments with attention. Finally, on the 14 May, Secretary of State Cardinal Parolin, in response to a journalist , stated that the arrest of Cardinal Zen does not necessarily implicate a potential retraction of the China- Vatican agreement regarding the nomination of bishops, but he expressed a desire that such episodes “not complicate the already complex path of dialogue”.

A scandalously soft declaration, complete with the grotesque statement that the Chinese authorities had “treated Cardinal Zen well”. Which does nothing to eliminate the fact that Cardinal Zen will be treated as a common criminal. This is substantially what John Lee Ka-Chiu, the new executive head of Hong Kong, said, after his election three days after Cardinal Zen’s arrest. Taking part in a local radio broadcast on 15 May in order to respond to international critiques raining down upon him after the arrest of Cardinal Zen and another four people accused of having violated the Law and national security, John Lee –who is also  Catholic -  stated clearly that in Hong Kong, dissent is not punished, but transgression of the law certainly is. And it doesn’t matter how famous those individuals are or what they believe in, because “if his behaviour has breached the law, it needs to be addressed in accordance with the law.”. In other words, Cardinal Zen is considered a criminal because he belonged to an association which financially supported those activists who democratically protested in 2019, and will be judged as such.

Optimists may reasonably believe that Vatican diplomacy is at work in order to guarantee that the trial has no further grave legal consequences for the cardinal. it is possible. However, the words of Cardinal Parolin clearly indicate that all decisions are functional upon the continuation of the agreement with Peking regarding the nomination of Bishops. One must remember that the contents of the accord signed in September of 2018 are secret, and are expected to be renewed every two years. This is precisely the moment during which the terms of the agreement are being negotiated for next September. The words of the Secretary of State will, without a doubt, be justified by the requirements of diplomacy and the desire to succeed on both fronts: the maintenance of the China accord as well as the liberation of Cardinal Zen. The truth of the matter is that they have revealed a new ideological tinge to their diplomacy, that is, it seems that the defense of the dignity of each sovereign human individual has become secondary in importance with respect to the Holy See’s political objectives. The truth may be sacrificed in the name of a presumed superior interest. This line of thinking is indistinguishable from the concept of the sacrifice of individuals in the name of the State, a Political Party or any such ideal.

For the average Catholic, it is scandalous to observe the silence of the Vatican in the face of the arrest of an elderly, much-loved Cardinal known for his selfless defense of the Chinese Church and of his people; it seems the Vatican intends to sacrifice Cardinal Zen to save its ongoing dialogue with Peking. This is even more shocking considering that in other situations, such as the Israeli- Palestinian conflict, the Holy See is quick to denounce the violations of accords and express its outrage.

This reality is evident both to Hong Kong and to Peking: yesterday, the newspaper South China Morning Post published an article with an eloquent title:  “No Vatican Tears  for Cardinal Joseph Zen”. Interpreting the weak reaction of the Holy See, the newspaper claims that, in the end, Cardinal Zen is “a great embarrassment for the Vatican”, due to his extremist positions against the Chinese regime, and for his harsh attacks of the secret China-Vatican accord and of its mastermind, Cardinal Parolin. The article goes so far as to claim a China-Vatican agreement which removes all opposition such as Cardinal Zen and those in Rome who also hold his position (the article expressly cites Cardinal Gerhard Muller, prefect emeritus of the Congregation for the Doctrine of the Faith).

If signals of this kind continue to emanate from the Holy See, Vatican diplomacy will be a failure, and not simply before an arrogant China which believes it is free to use any form of prevarication at will. This approach is the factual negation of their many moral arguments. Above all, it is a scandal to all Catholics, who at this point are correct in believing that they too may be abandoned by the figureheads of their Church, if it were to appear politically expedient to do so.