Why workers must look to St Joseph

Contrary to ideologies (Marxism first and foremost) that have instrumentalised workers, the Church’s Magisterium teaches that work must be done according to God’s will. In the Christian sense, it makes man a participant in the work of the Creator and in the plan of salvation. This is why Pius XII pointed to Saint Joseph as a model. 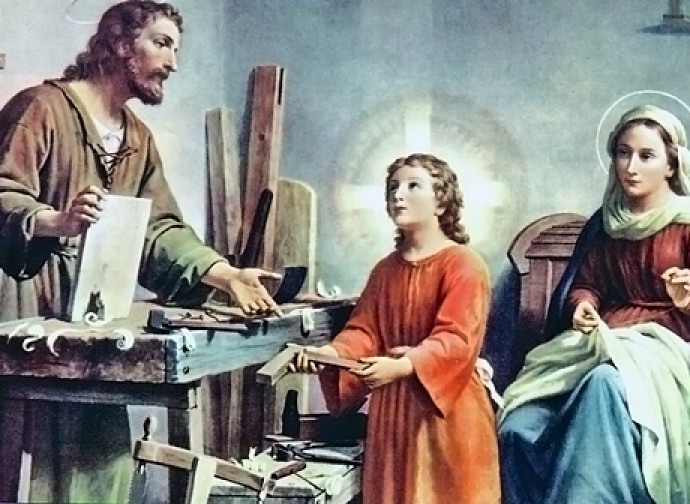 The Gospels, albeit with brief references, give us an often underestimated piece of information: a significant part of Jesus’ earthly life was spent at work. To express the amazement (mixed with scandal) before the wisdom that Jesus showed from the beginning of his public life, his fellow citizens called him “carpenter” (Mk 6:3) or “carpenter’s son” (Mt 13:55). Who taught him the trade? St Joseph, of course.

This schooling by his virginal father therefore had a notable influence on Jesus’ growth in wisdom, age and grace (which took place in general submission to his parents). Hence the salvific significance of this reality, well summed up in the apostolic exhortation Redemptoris Custos: “Human work, and in particular manual work, finds a special emphasis in the Gospel. Together with the humanity of the Son of God, it has been accepted in the mystery of the Incarnation, just as it has been redeemed in a special way. Thanks to the workbench where he practised his trade together with Jesus, Joseph brought human labour closer to the mystery of the Redemption” (RC, 22).

The Redeemer, by approaching work, has therefore purified and sanctified it, as Father Tarcisio Stramare, a Josephologist who collaborated on the RC, also recalled. “Human activity was not excluded by Him from salvation, because His solidarity with man was total: in everything similar to us except in sin”. And on the role of the head of the Holy Family, he added: “Well, no one among men, after Mary, has been as close to the hands, mind, will, and heart of Jesus as St Joseph. Proposing the example of Saint Joseph to the workers, Pius XII stressed that he was the saint in whose life the spirit of the Gospel had penetrated the most”.[1]

It was because of this closeness to Jesus that Pope Pacelli decided to institute the liturgical feast of “Saint Joseph the Craftsman” (today the memorial of “Saint Joseph the Worker”), announcing it in his speech on 1 May 1955. The historical context in which this took place was negatively influenced by Marxist ideology, which looked at workers (especially manual workers) through the lens of class struggle, according to an atheistic perspective that excluded any reference to the heavenly Father. It therefore played into the hands of the devil, who “sows discord” and “does everything possible to spread false ideas about man and the world, about history, about the structure of society and the economy”. It is true that Marxism, in the meantime, has become more fluid, but ideologies continue to proliferate. And work is still, together with the family, one of the domains most under attack.

Yesterday as today, the solution is - as Pius XII himself pointed out - to recognise Christ’s kingship over history and to open to Him “the social realities”, the only way to true peace and justice. In order to avoid the contamination of error among the weakest links of the chain, the Pontiff pointed out this precise urgency: “The religious formation of the Christian, and especially of the worker, is one of the principal tasks of modern pastoral action”. Such formation cannot be limited, in Pacelli’s intentions, to satisfying religious obligations, but must lead the worker to deepen his knowledge of the doctrine of the faith and to understand the divinely established moral order of the world. And that must be recognised first and foremost by rulers and employers.

Pius XII urged the recovery of the Christian meaning of work, which must be oriented towards “extending the kingdom of God”. And what better protector could there be than Saint Joseph, who by his work and his whole life, worked solely for this end?

Work, understood in the Christian sense, in fact makes man a participant in God’s creative work. Recalling the biblical account of the days of Creation, St John Paul II wrote that the first “Gospel of work” can be found in Genesis. That description (which tells us that God at the end of each day saw the goodness of His work) demonstrates the dignity of work and “teaches that man in working must imitate God, his Creator, because he bears within himself - he alone - the unique element of likeness to Him. Man must imitate God both in working and in resting, since God himself has willed to present his work to him in the form of work and rest” (Laborem Exercens, 25). The worker is therefore called to observe Sunday rest, which not only concerns the physical aspect but involves his entire interior dimension. It is a question of rest in God, which man must seek on the “seventh day” but also on each working day, finding time to devote to prayer.

In this, too, St Joseph is a master, for the carpenter from Nazareth not only used his work to feed and serve Jesus and Mary, but found the greatest joys of the day in adoring the divine Son and giving praise to the Father. The glorious patriarch thus perfectly embodied the principle of ora et labora and, for this reason, contemplatives also have a model in him.

From what has been said, it is evident that work - whether manual or intellectual (see the praise of the scribe who makes himself a disciple of the Kingdom of Heaven, in Mt 13:52) - must be carried out in accordance with God’s will and help man to gain eternal joy. This also reminds us that one of its essential dimensions, as Wojtyla pointed out, is fatigue, which admirably links it to redemptive work. “In human work the Christian finds a small part of Christ’s cross and accepts it in the same spirit of redemption in which Christ accepted his cross for us. In work, thanks to the light that penetrates us from Christ’s resurrection, we always find a glimmer of the new life...” (Lev, 27). How does the perspective of our days change if we look at work - with all its hardships and perhaps little daily annoyances - in this way? Then it truly becomes an expression of love, as it was for Joseph, and a means to Paradise.