Why the Italian Bishops can still save Italy from grave danger

May 1, at the height of the Covid-19 epidemic, an Act of Entrustment to the Immaculate Heart of Mary was celebrated in Italy, after the solicitation of the faithful. But the event, transmitted by the Bishop Conference media channels, wasn't live as announced, but recorded five days earlier. Many Catholics expressed disappointment for the "farce". The Bishops could show their regret by granting the original request: a real Act of Consecration. 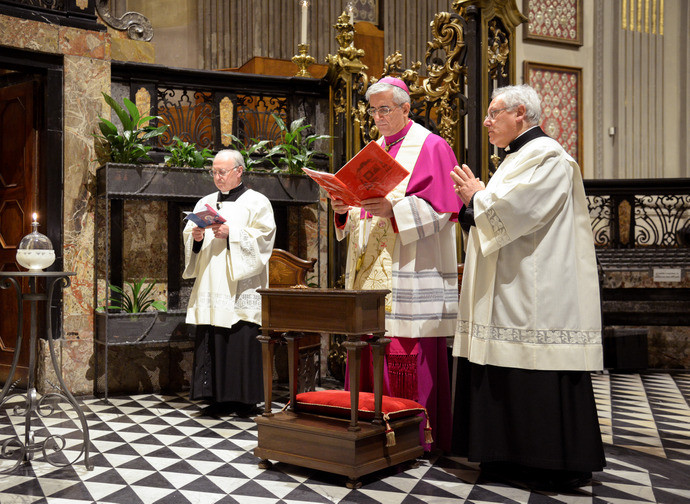 May 1, at the height of the Covid-19 epidemic, an Act of Entrustment to the Immaculate Heart of Mary was celebrated in Italy. It wasn’t the Act of Consecration which the faithful had been requesting for weeks, but it was a step in the right direction towards putting the country safely under Mary‘s protective mantle. Hundreds of thousands of Italian Catholics tuned in that warm evening, to raise one communal prayer to Mary, to bring an end to all the suffering inflicted by the pandemic.

That the Catholic faithful in Italy are starting to make decisions on their own about religious practices, has been clear at least since March 25. It was the date chosen by the Portuguese Bishops Conference to renew an Act of Consecration to Our Lady of Fatima. Their invitation which was wholly embraced by the Episcopal Conferences in Poland and Spain and later by 21 countries around the world who participated in streaming, to the faithful’s dismay it fell on deaf ears in Italy.

A number of Jesus’ parables in the gospels reward persistence as a virtue but the messages that went viral on social media of Our Lady of Civitavecchia’s explicit request that Italy be consecrated to her Immaculate Heart because “the country is in grave danger”, certainly played its part in mobilising the masses. The general consensus to raise a din that even the indifferent Italian Episcopal Conference couldn’t ignore, ultimately achieved its goal.

April 20 Cardinal Bassetti, president of the Italian Episcopal Conference, announced, “it is the shepherds’ duty to guide their sheep, the Christian flock, but too often it is Christians who drive their pastors, as occurred in this case”. To this, an official statement was added later: “in response to the proposal and solicitation of many faithful,  the Italian Episcopal Conference entrusts the entire country (Italy) to the protection of the Mother of God as a sign of salvation and hope. They will do this on Friday 1st May, at 9 pm, with a moment of prayer, in the basilica of Santa Maria del Fonte near Caravaggio ". The appeal for a consecration had been substituted with an entrustment, but the choice of Caravaggio for the prayer service touched the faithful for its particular significance. The holy Basilica of Caravaggio is located in the diocese of Cremona in the province of Bergamo, one of the worst areas to be devastated by the Covid-19 pandemic.

Nobody questioned that publicity for the event played an important part in the next phase of preparations or that the Italian Episcopal Conference shouldn’t trust the job to their own media channels: Avvenire, TV2000, RadioInblu. And that they had got it right could be measured by the enthusiasm and suspense that crescendoed with each daily announcement of the live transmission on May 1. It seemed the faithful’s plea was actually Mary’s voice offering her divine maternal protection.

At 21:00 the prayer service started. Despite the surprise that it wasn’t conducted by Cardinal Bassetti as expected but by the Bishop of Cremona, that the official text failed to mention entrustment, Italy or Holy Virgin, the Act of Entrustment was conducted with solemnity and reverence. The next day the main headlines announced its success in numbers. And apparently Italy too was now under the protection of the Immaculate Heart of Mary.

On May 4, a post on social media by a local resident suggested that the event had been a farce. He described how the Basilica had been closed to the public on April 27 yet occupied by television cameras and technicians, while on May 1, it was open and empty. The act had been recorded on the 27th and transmitted on May 1, five days later as a live transmission. When the truth hit the news headlines, awkward questions were posed: Why did the Italian Episcopal Conference deliberately play a game of pretence with the faithful? Why did they publicise an Act of Entrustment to Mary on the symbolic date of May 1 as a live event knowing it was a recording? Why did they continue to publicise it as a live event for another five days even after the film had been shot?

As of yet, those who do know the answers won’t share the information. The diocese of Cremona and the Italian Episcopal Conference have confirmed the news but without providing an explanation. The only person to suggest an hypotheses is a technician who was involved in the recording. His idea is, “it’s a matter of costs”. Perhaps or perhaps not, but the strategy of silence employed by the bishops, in the aftermath of the truth emerging, has been perceived by many as an admission of guilt.

It’s been a bumpy ride, since the Covid-19 lockdown in Italy, for the Italian Episcopal Conference. No one disputes the challenges they’ve had to face and everyone agrees that their pastoral leadership has tended to agitate rather than comfort their flock. This recent anomaly which has pulled Our Lady in to the fray has punctured any remaining faith there was in the Italian Church’s “good shepherds”. Yet as the saying goes, “ if there is a will there’s a way” and that’s all the faithful are asking not for deserved justice.

The faithful are still asking that their original request be granted: an Act of Consecration to the Immaculate Heart of Mary to take place live, led by Cardinal Bassetti as the Episcopal Conference’s official statement suggested. And if it is true costs are an insurmountable problem, the faithful it seems would be willing to help foot the bill.

It’s never too late, Cardinal Orani João Tempesta, the archbishop of Rio de Janeiro, consecrated Brazil to the Immaculate Heart of Mary on the Feast of Our Lady of Fatima only on May 14. And if in this grave moment of danger, we know who can rescue us, it seems madness not to accept their offer. At this point, the faithful have one last unanswered question: is the real problem we lack faith?