Who lost the war in Afghanistan? The blame game proceeds

Top American military brass has admitted defeat in Afghanistan. According to General Milley, the Biden administration bears political responsibility, while General McKenzie blames Trump for signing agreements with the Taliban in Doha. But it was Obama who first announced U.S. plans for withdrawal. 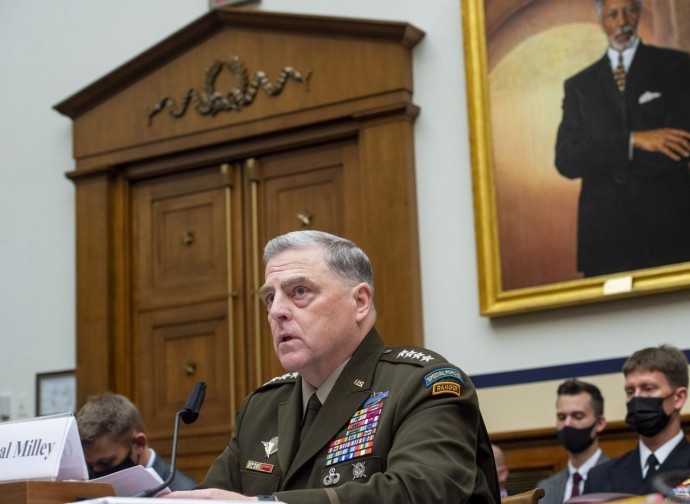 As the Americans and their NATO allies are still dealing with how they lost the war in Afghanistan, the blame game is underway across the Atlantic. It is a game whose protagonists are military leaders who have been questioned before congressional committees. In reality, it is all political theatre. The Democrats are hell bent on shifting all responsibility on Donald Trump and his administration’s signing of the Doha agreements with the Taliban. Republicans, in turn, are hell bent on relaunching accusations made against President Biden for his negligent attention to what was really happening on Afghan battlefields. Their aim is to weaken Biden’s Administration, which is turning out to appear shady in many respects.

Testifying before the House Defence Committee, the Joint Chiefs of Staff and top ranking US military authority, , General Mark Milley, acknowledged that America had "lost" its 20-year war in Afghanistan. "It is obvious to all of us that the war in Afghanistan did not end the way we wanted it to, with the Taliban in power in Kabul." This "strategic failure", he said, was "the consequence of strategic decisions that go back to the past." First, there were the failed opportunities to capture or kill Osama bin Laden shortly after the initial intervention in Afghanistan in 2001. Then there was the Iraq invasion in 2003 that depleted numerous troops followed by Washington's failure to prevent Pakistan from becoming a “Taliban sanctuary." Finally, there was the decision to withdraw military advisers from Afghan battalions.

Regarding managing of the final stage of the Afghan conflict, the American website Axios reported that General Milley explicitly blamed the State Department for the Afghanistan evacuation failure. During a closed-door hearing, Miley said that the department's officials "waited too long" to order withdrawal operations from the Kabul airport. He admitted that "our credibility has been damaged by our withdrawal from Afghanistan", adding that U.S. intelligence had predicted the collapse of Afghan security apparatus after pulling out. Miley concluded, however, they couldn't not foresee it happening so quickly, even before the withdrawal of allied forces was even completed.

The head of the U.S. Central Command in charge of Afghan operations, General Frank McKenzie, blamed Donald Trump for the collapse of the government and military forces in Kabul  which led to the Taliban's ultimate triumph. He pointed fingers at Trump's 29 February 2020 agreement with Taliban militia. He said this "committed the American government to complete withdrawal of its troops by 21 May 2021 in exchange for an end to attacks against their international alliance." In a hearing before the House of Representatives Armed Services Committee, McKenzie made it clear that once the number of U.S. troops fell below 2,500 (as Joe Biden wanted in April so as to complete the withdrawal by September), the crumbling of authorities in Kabul began to accelerate. "The signing of the Doha agreements had a very negative effect on the government and the Afghan military, especially psychologically. But we set a date after which they knew they would no longer receive assistance,'' he said.

Among the reasons for the defeat, Defence Secretary Lloyd Austin cited the abandonment of air raids, which "allowed the Taliban to grow stronger and intensify their attacks on the Kabul army" and had caused massive casualties. In actual fact, the Trump administration had not stopped air raids but, on the contrary, had stepped them up in the face of repeated Taliban attacks against government forces in Kabul. Thus, it was the Taliban  who were violating the agreements signed earlier in Qatar. According to the Qatar treaty, the withdrawal of U.S. troops should have been matched by the Taliban's commitment to not hosting terrorist groups (such as al-Qaeda) on Afghan soil, ceasing war activities, and  negotiating with President Ashraf Ghani's government to ensure a peaceful future for the country. These were commitments that the Taliban have not kept. Their refusal to commit to prior agreements was also encouraged by Trump who, on the eve of the presidential elections in November, said he would reduce the American presence in Afghanistan (as well as in Iraq) to a mere 2,500 soldiers. His "electoral goal” was that of bringing home as many soldiers as possible.

The Taliban were further incentivised by the firmness with which Biden, upon assuming office at the White House, insisted on completing withdrawal of American and allied forces by 11 September 2021. This promise was made despite the fact that the Taliban had ratcheted up their attacks on allied forces in Kabul. It is no coincidence that Generals Milley and McKenzie stated in hearings that they had recommended the White House maintain at least 2,500-3,500 troops in Afghanistan to support the government and forces in Kabul. They warned that a complete and unconditional withdrawal would lead to its collapse. The fact that this warning to the Biden administration came from within his own own military leadership (and admitted by Austin) is bound to have a strong political impact, precisely because Biden had always denied that his defence chiefs had suggested keeping military contingents in Kabul.

Milley went so far as to say that the main point of the Doha agreements was none other than the Taliban's commitment not to welcome al-Qaeda militias on Afghan territory. The pacts had in fact been disregarded because "the Taliban were and remain a terrorist organisation and have not yet broken ties with al-Qaeda."  The general assessed that there is a possibility of al-Qaeda reconstituting itself in Afghanistan within a period of 6 to 36 months. The political responsibility for the defeat in Afghanistan is, therefore, mainly attributable to Biden who effectively ignored developments on the ground and right after Trump reached an agreement with the Taliban and without stopping the withdrawal of troops in the face of non-compliance by Islamist militia leaders.

In strategic terms, responsibility should also be attributed to Barack Obama. It was Obama who had initiated negotiations with the Taliban. The year was 2010 when the Taliban were surrendering territories and suffering horrendous losses as a result of heavy allied offensives. During this time Obama’s administration announced that a U.S. troop withdrawal  would begin the following year in 2011. This message clearly indicated the US willingness to disengage from the Afghan conflict and encouraged the Taliban to resist, reorganise and wait for the drastic reduction of allied forces on the ground before resuming its offensive.