What we (don't) know about Canadian residential schools

The debate on the Church's role in the forced assimilation of native peoples has been rekindled by the announcement of the discovery of burials, which are, however, only 'probable': to confirm hypotheses and accusations it will be necessary to dig (in the ground and in the archives). Admitting guilt does not mean avoiding questions about one's own responsibility, but also that of others. The Canadian government is vocal against the Church, forgetting that until yesterday Trudeau was fighting the indigenous people in court. 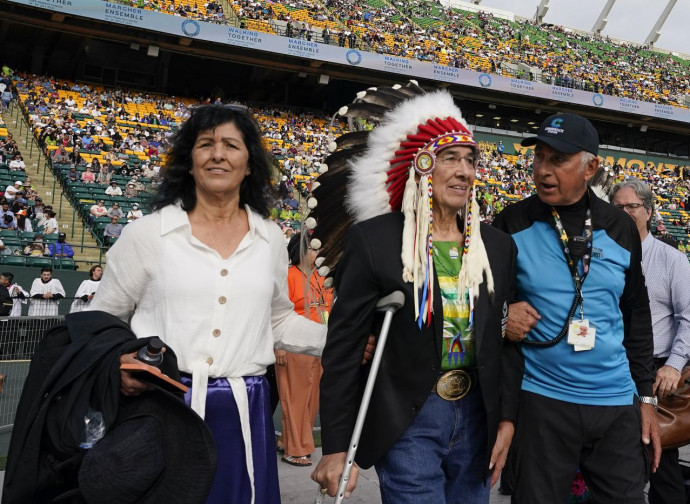 “Our aim is to carry on until there is not a single Indian in Canada who has not been assimilated...” said Duncan Campbell Scott, Superintendent of Indian Affairs in Canada between 1913 and 1932. The forced assimilation of indigenous Canadians was a precise design of the state, but was conducted mainly through forced separation from families and residential schools entrusted - this is the sore point - largely to Catholic (and to a lesser extent Anglican or United Church of Canada) clergy. According to the testimonies collected by the Truth and Reconciliation Commission of Canada (TRC), the pupils of those schools, run by priests and nuns, suffered hardships, mistreatment, and abuse, including sexual abuse. In general, the overcrowding and poor hygiene favoured the outbreak of disease, with consequent mortality peaks (an estimated 3000 to 6000 children), as well as the trauma of being forcibly separated from family, language, and place of origin. And the horrors seem to be confirmed by the discovery of hundreds of burials.

Let’s accept the blame but also ask some questions to try to understand the facts buried in a sea of adjectives by a press that aims to outrage rather than inform. Allocating the responsibilities does not in any way mean belittling them, although it is always convenient to attribute them all, regardless, to the Catholic Church - even on the basis of true testimonies and alleged findings, as has already been noted. But the Church takes it upon itself to shoulder these responsibilities and say mea culpa, and this is not new: in 2008 Benedict XVI did so for the Canadian events, and in the 1990s the various religious institutions involved, from the Missionary Oblates of Mary Immaculate to the residential schools themselves, had also done so. It has to be admitted that among the various accusers of the Church in Canada, the most honest has been Si Pih Kol, who was the protagonist of an outburst during Pope Francis' 'penitential pilgrimage'. The indigenous woman sang a protest in her own language, to the notes of the Canadian anthem. I say 'the most honest', as she had also done so during the visit of Prince Charles of England. In fact, although many forget it, Canada belongs to the Commonwealth and as such was and is subject to Her Britannic Majesty's crown. One of the children (now an adult) recounts that when faced with his refusal to go to school they objected: “If you don't go to school your daddy will end up in jail”. But who had the power to send him to prison? The priest or the state?

The debate was rekindled by the announcement of the discovery of graves in the grounds of Kamloops Residential School. But those graves so far are 'presumed', according to anthropologist Sarah Beaulieu, who examined the ground with geo-radar, and also reduced the count of ‘probable burials’ at Kamloops from 215 to 200. "All the residential school grounds likely contain graves and missing children”. In other words: there are depressions in the ground, we are in a school, and therefore they could be children's graves, she claims. However, she says: “With geo-radar alone, we cannot definitively claim that there are human remains until we excavate”. But the excavations have not yet taken place, and the New York Post reports that when asked for further clarification, “Beaulieu did not respond to emails”.

"Everything is based on the simple discovery of anomalies in the ground, disturbances that could have been caused by root movements, as the anthropologist herself mentioned during the 15 July press conference. Concrete evidence is needed before the accusations made against the Oblates and the Sisters of St Anne are written into history. Exhumations have not yet begun and no remains have been found. “A crime committed requires verifiable evidence”, says Canadian historian Jacques Rouillard, lecturer at the University of Montreal.

However, the testimonies of mistreatment and abuse reported to the Commission remain. If the system was state-run, priests and nuns were its managers - bad managers, according to survivors' accounts. Given that the greater the allegations, the more evidence is needed to corroborate the testimonies, even a single case of abuse by a religious is an extremely serious stain on the record.

Apart from the personal faults of the individual priests and nuns involved, the accusation that can be levelled at them on a more 'institutional' level is not that they were over-zealous ministers of religion (since they acted contrary to divine law, unlike the rulers, who acted in accordance with civil law), but rather that they lent themselves to the role of civil servants.

"The Commission's investigators, despite the 71 million dollars they received, worked for seven years, without finding the time to consult the archives of the Oblates of Mary Immaculate, the religious order that, at the end of the 19th century, began managing the Residential Schools", notes historian Roberto de Mattei. "While, basing himself on these very archives, the historian Henri Goulet [...] has shown that the Oblates were the only defenders of the traditional language and way of life of the Indians of Canada, unlike the government and the Anglican Church, which insisted on an integration that uprooted the natives from their origins”. We note incidentally that Aborigines currently make up only 2% in that other British domain that is Australia. And it is plain for all to see that instead, in Latin America, Amerindian traits are still very visible and the mixed race prevails.

Finally, there is a great absentee: the Canadian martyrs who gave their blood for those peoples. It would be unfair (on both sides) to read only this obscure chapter of the entire history of missions in Canada. Missions that began in the 17th century, with the arrival of the Jesuit Charles Lallemant and then John Brebeuf, who was later slaughtered along with seven other companions by the Iroquois, who were convinced that the presence of the missionaries caused natural disasters. Incidentally, one of the rare surviving testimonies of the language of the Hurons is owed precisely to Brebeuf, and it is a catechism written in their language: quite the opposite of the forced assimilation later pursued by the government. With the invasion of the Iroquois (who also captured the Hurons: evidently the natives were also at war with each other) Brebeuf and his comrades were killed with particularly bloody torture, from burns to nail-pulling. But no sensible person would reduce the entire culture of the natives to these bloody episodes. This is only done when the perpetrator is Catholic.

But if the Church is reiterating its mea culpas, the same cannot be said for the Canadian government, condemned by its own courts because it did not want to compensate the natives. Minister Marc Miller says that the pope's visit is not enough. But he forgets that because of a 15-year-old legal battle over discrimination in the welfare system against children from the reserves, Trudeau took legal action against the natives “to make sure the compensation was fair”, losing it and thus having to pay. However, he earned the irony of Jagmeet Singh, leader of the New Democratic Party: “You can't take a knee one day [referring to anti-racist demonstrations, ed] and then drag the indigenous children before the court'.