The wave of emigrants from Belarus pressing at Poland's borders is rightly described by EU leaders as a destabilising move. Lukashenko uses the "weapon of mass migration" to obtain the withdrawal of sanctions. But the same attitude has never been taken when Italy was in the same predicament. 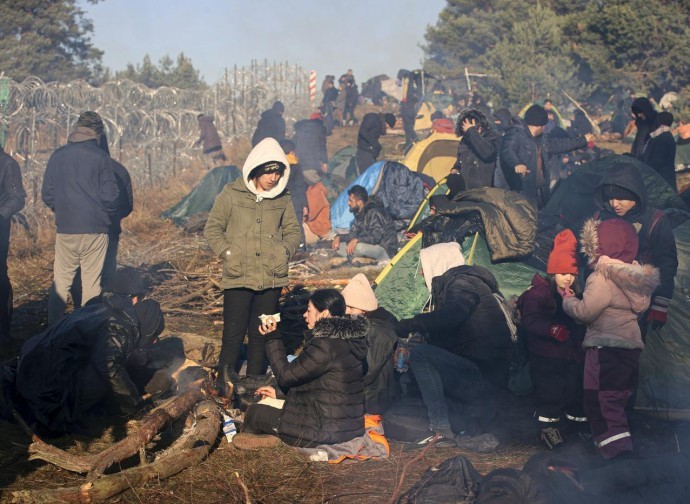 The whole of Europe is on the alert and is sparing no threats and further sanctions against those who manage the flow of illegal immigrants heading to cross EU borders. But only the eastern ones, between Belarus and Poland. No one in Europe cares about the "southern flank", about Italy, which is increasingly becoming the preferred landing place for smugglers, traffickers, and NGOs. And, frankly, nor do they care in Italy, judging by the indifference that has so far characterised the Draghi executive faced with the mass landings of recent days. Between last Sunday and Monday alone, more than 1,500 illegal immigrants have landed, almost two thirds of them disembarked from NGO ships, bringing to almost 57,000 the number of illegal immigrants who have reached Italy by sea alone since the beginning of the year: more than twice as many as last year and over six times more than in 2019.

It is depressing to read the statements made in the last few hours by some European leaders in the face of the thousands of illegal immigrants who have arrived in Belarus thanks to the compliant government in Minsk and have launched an "assault" on the Polish border, which is guarded not only by policemen but also by 12,000 soldiers. A situation that "threatens the stability and security of the entire EU", Polish Prime Minister Mateusz Morawiecki said on Monday. "Sealing the Polish border is in our national interest. But today the stability and security of the entire EU are at stake", the Polish head of government wrote on Twitter. Indisputable, but this principle should apply to all EU borders, including maritime ones.

France has accused Alexander Lukashenko's Belarus of trying to organise a "migrant traffic aimed at destabilising the European Union", a French diplomacy spokesman said. "Poland or Germany cannot handle this alone," German Interior Minister Horst Seehofer told the Bild newspaper. "We have to help the Polish government protect its external border," he urged, "This would be the task of the European Commission; I appeal for it to act”. "The Belarusian regime acts like a human trafficker," said German Chancellor Angela Merkel's spokesman Steffen Seibert, speaking to journalists. Minsk "exploits refugees and migrants in a way that is reprehensible from both a political and a humanitarian point of view" and Europe "will put up a united front against this continuous hybrid attack". It is precisely Germany, which has always been deaf to Italy's requests for help, that is mobilising all its partners to defend the Polish borders through which over 23,000 illegal immigrants have passed this year, 50% in the last month, in any case less than half of those who have arrived in Italy this year.

A double standard, perhaps motivated by the fact that the Afro-Asian illegal immigrants entering Poland are all heading for Germany, and at the barriers along the Polish-Belarusian border they shout “Germany, Germany! We want to go to Germany!" The paradox, which should induce the Italian government to make a formal protest, is that while Berlin is concerned about defending the Polish border from illegal immigrants heading for Germany, it does not lift a finger to stop the German NGO ships that in the Mediterranean continue to unload illegal migrants in Italy, picked up in Libyan and Maltese waters, such as the over 800 landed last Monday by Sea Eye 4 at Trapani in Sicily.

On this issue the entire EU leadership is putting its credibility at stake while in Italy it should by now be clear to everyone (apart from the fans of illegal immigration) that only national measures such as the closure of ports, agreements with the countries of departure, interceptions at sea, and the banning of NGO ships from territorial waters will be able to restore state control over maritime borders. Today, indeed, there are margins and conditions for national initiatives similar to those taken, for example, by Greece.

As for Europe, it is better not to count on it. All European leaders, from the President of the European Council Charles Michel to the President of the European Commission Ursula von der Leyen, speak of "blackmail", "weapons", "destabilisation", and "hybrid war" to define the impact of illegal migration flows from Belarus. Correct and appropriate terms, of course, but they apply to all illegal flows managed by nations or criminal organisations that enjoy the complicity of the nations they operate in. The blackmail of migrants and the use of human masses by more backward countries against richer nations were well illustrated back in 2010 by Kelly Greenhill in her book "Weapons of Mass Migration", which should be required reading for all European politicians. Libyan leader Muammar Gaddafi used this weapon against Italy in an unscrupulous manner to force Rome to negotiate the agreement on "war reparations" in Tripoli, which was then signed by Silvio Berlusconi in 2009. It is not clear, however, why when such weapons are used by Belarus, it is considered an attack on the heart of Europe, while when Recep Tayyp Erdogan has been using them for many years, Germany rushes to promise Ankara billions (which all Europeans pay) in exchange for a fake commitment to stop the flows.

From the Balkan route to the Libyan beaches, from the landings on the Italian Ionian coast to those on the Greek islands, Turkey is today the real arbiter of illegal flows in the Mediterranean and has repeatedly threatened and blackmailed the Union. Yet no one is talking about an attack on the borders, or a hybrid war, or an attempt to destabilise Europe, perhaps because Berlin fears that the large Turkish community living in Germany would not react mildly.

The migratory pressures from Belarus, unlike the far more massive ones on the Italian coast, have even alarmed NATO, confirming that the affair lends itself to being used in the tug-of-war with Moscow. The migratory flows are "putting pressure on our allies Lithuania, Latvia, and Poland", an official explained, assuring that NATO "is ready to further assist our allies and maintain security in the region".

Even from Washington, US State Department spokesman Ned Price said, "The United States strongly condemns the Lukashenko regime's political exploitation and coercion of vulnerable people. We call on the regime to end its campaign of orchestrated flows of illegal immigrants," the spokesman added, calling Minsk's policy "cynical and inhumane" and expressing support "for Poland and all of our European allies who are threatened by Belarus' unacceptable actions".

The United States and NATO are mobilised if it is “communist and Putin-friendly” Belarus that is trafficking illegal immigrants, but they are not concerned if the same trafficking is carried out by Turkish “allies” or criminal organisations from the Middle East and North Africa. Once again, we have double standards.