War and peace, not all popes are the same

The same call to lay down arms, but with a different approach depending on pope situation. From the "suicide of civilised Europe" (Benedict XV) on the Great War, to Pius XII's attempts to avert the Second World War, to Francis' current attitude. The Daily Compass interviews Professor Massimo de Leonardis on the role of Popes in the times of war during the 20th and 21st centuries. 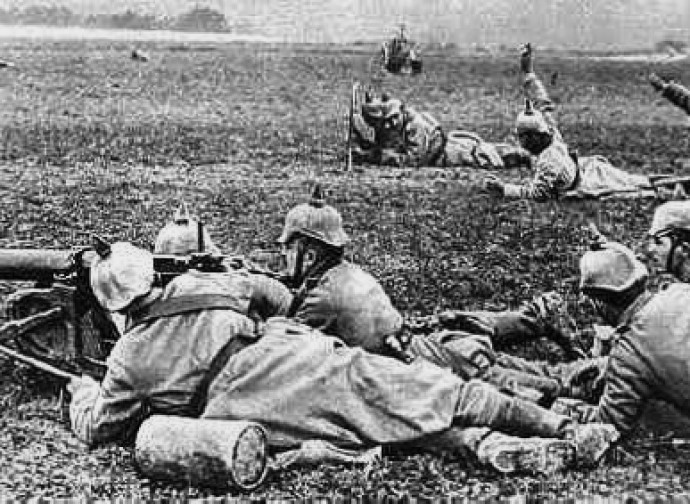 The pontifical magisterium in times of war is a somewhat articulated but little explored theme. From Benedict XV to Pius XII, up to St John Paul II and Francis, the Popes' approach to major conflicts has never been univocal. The common thread linking each experience is probably that of a substantial deploration of arms, which, decade after decade, has become more radical. The Daily Compass spoke about this with Massimo de Leonardis, Professor Emeritus of History of International Relations at the Università Cattolica del Sacro Cuore in Milan.

Professor de Leonardis, let us start by analysing the diplomatic approach of Benedict XV: this Pope is best known for having condemned the 'useless slaughter' of the Great War. Could it be said, that he was an advocate of neutrality or, rather, he took sides and his strategy was closer to non-belligerence?
The correct term to identify the Holy See's position in the Great War is 'impartiality', which was also imposed by the fact that Catholics fought on both sides and was also the necessary prerequisite to be able to exercise a mediating role. ‘Impartiality' imposed extreme caution in explicitly denouncing violations of the jus in bello, ‘the law of war’, by the warring parties. I would like to add that, in my opinion, Benedict XV pronounced an even more pregnant phrase than 'useless slaughter'. In fact, again in his note of 1 August 1917, he said “this war [...] appears to us as the suicide of civilised Europe”, an expression he had already used twice. History has confirmed this assessment. The victors were able to delude themselves that the slaughter had not been in vain: for example, France recovered Alsace and Lorraine and Italy seized Trent and Trieste. There is no doubt, however, that, for Europe as a whole, the foundations were laid for its obliteration as a major world player.

During the First World War, individual episcopates showed a more 'patriotic' attitude than the Pontiff. Do you see parallels in this with the differences in approach between Pope Francis and some pastors of the Eastern Ukrainian churches during the current conflict?
The Orthodox and Protestant Churches always have a national character and are closely linked to individual States. The Catholic Church has a universal dimension, but this does not exclude that episcopates and clergy can adopt a patriotic attitude. The most resounding case of dissent from the papal initiative occurred in France, where the famous Dominican preacher Antonin-Dalmace Sertillanges from the Madeleine chair declared: “Your Holiness, we do not want to know about your peace”. In the United Kingdom, Catholics had to definitively prove unfounded the age-old accusation of being treacherous by having a 'double loyalty', to the King and the Pope. These are structural situations that are repeated even today, as far as the Orthodox churches are concerned, which not surprisingly are divided between those who are loyal to the Moscow Patriarchate and those who are loyal to their own nation.

Let’s now talk about Eugenio Pacelli: what was his diplomatic role in the Second World War, especially towards the two victorious powers, the USA and the USSR?
Pius XII had been a leading player in the diplomatic initiatives of Benedict XV in the Great War, so he was perfectly aware of the limited possibilities of intervention in a conflict that saw the likes of Hitler and Stalin as leading players. In fact, Pius XII was by no means ‘Hitler's Pope’ as some have absurdly defined him. If anything, his support emerged for the American president Roosevelt, whom he had met in 1936 in the United States and established a cordial relationship with him.

What were Pius XII's major diplomatic interventions in the Second World War?
Firstly, the obviously doomed attempt to organise an international conference to prevent the outbreak of war. An important, little-remembered event occurred in December 1939, on the occasion of the tenth anniversary of the Conciliation. King Victor Emmanuel III paid a state visit to the Vatican and, a very significant fact, Pius XII, instead of delegating the task to the Secretary of State as was the practice, personally returned the visit to the Quirinale Palace, which had once been the residence of the Popes. From the context of the documents, the speeches made, and, above all, considering Mussolini's highly irritated reactions, one can well understand the significance of Pius XII's gesture as strong pressure for Italy to stay out of the war. The Pope then denied any form of 'blessing' to the 'anti-Bolshevik crusade', indeed in 1941, at Roosevelt's request, he gave fundamental support to the extension to the USSR of the benefits of the 'Lend-Lease Act’, promoting a declaration by Msgr McNicholas, Archbishop of Cincinnati, stating that Pius XII's encyclical Divini Redemptoris condemned communism but not the Russian people, followed by a resolution of support for the president's policy by the National Catholic Welfare Council (a forerunner of the National Conference of Catholic Bishops). It should also be noted that the Pope, after brief reflection, agreed to set up a secret channel of communication with the German anti-Hitler conspirators.

From Pius XII to Francis, how have the Popes considered the concept of deterrence?
In his Christmas radio message of December 1948, Pius XII admirably described the concept of deterrence: “the [...] defence against unjust aggression is undoubtedly fully legitimate. To this defence is also bound the solidarity of nations, which has the duty not to leave the aggressed people abandoned. The assurance that this duty will not go unfulfilled, will serve to deter the aggressor and thus to avoid war, or at least, in the worst hypothesis, to shorten the suffering it causes”. In the same document, the Pontiff criticised two opposing positions: "some take up the old saying, not entirely false, but which lends itself to being misunderstood and which has often been abused: 'si vis pacem, para bellum': if you want peace, prepare for war. Others believe they find salvation in the formula: peace at all costs! Both sides want peace, but both endanger it; some because they arouse mistrust; others because they encourage the safety of those who prepare aggression”. Concepts inspired, even before the centuries-old Catholic doctrine on 'Just War', by natural law expressed in the maxim 'vim vi repellere licet', ‘it is permitted to repel force with force’, a phrase by Cicero transposed into Justinian's Digest. It does not seem to me that Pope Francis follows the same doctrinal path, preferring a total condemnation of war and armaments.

Apart from what has been said so far, what are, in general, the most relevant similarities and differences between Pope Francis' handling of the Russian-Ukrainian conflict and what Benedict XV and Pius XII did during the two World Wars?
The two World Wars were obviously much more complex events than the current Russian-Ukrainian crisis, which is more similar to, but still different from, the American invasion of Iraq in 2003, against which St John Paul II spoke out, well aware of the dramatic consequences it would cause. Pope Francis does not explicitly point to the formal aggressor, but recalls the non-univocal context that generated the invasion. Above all, the current Pontiff denounces that war causes disastrous consequences for everyone.