Wanda Poltawska, the anti-abortion champion and her sad birthday

St. John Paul II’s friend and Polish concentration camp victim of  Nazi abortion experiments said: "I saw Nazis tossing newborn babies into crematoriums: for all my life I’ve had these harrowing images before my eyes...I promised myself, if I survived, to study medicine and to defend life." Today Wanda Poltawska celebrates her 99th birthday while witnessing the latest attack on life in her native Poland. 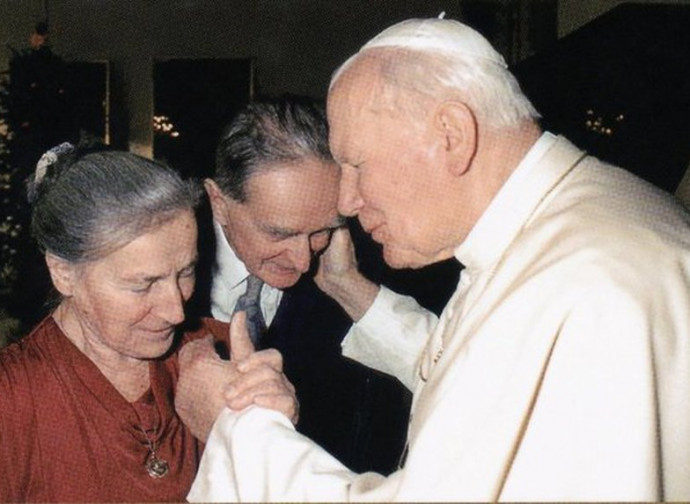 Exactly 99 years ago, on November 2, a little girl named Wanda Wojtasik  was born in the Polish city of Lublin (later she will be better known in the world by her husband's surname, Poltawska). Her peaceful youth was cut short when German forces attacked Poland on September 1, 1939, as the Second World War began.

Wanda Poltawska, who attended high school and led a scout troop, decided to enter the underground Polish resistance. Unfortunately, in February of 1941 she was found out, arrested, and later incarcerated for months in a Lublin prison. In September of that same year, together with other Poles, she was sent to the Ravensbrück concentration camp. There she stopped being a person, someone with a first and last name. Instead, she became known by her prisoner number: 7709. By the end of the war, 130,000 women had been sent to Ravensbrück. Of the 40,000 Poles, only 8,000 survived imprisonment.

Poltawska was not put to death by a Nazi firing squad. However, she suffered a crueler fate. She became a "Kaninchen", a prisoner ordered to participate in medical "experiments" at the nearby SS clinic directed by Dr. Karl Gebhard. In short, she was turned into a human guinea pig. The "medical experiments" caused her tremendous pain and she almost lost her mind. Fortunately, her concentration camp was liberated on April 30, 1945 and Poltawska moved from Lublin to Krakow after the war. Changing cities did not erase her nightmares of war and captivity. After experiencing Nazi hell, she thought long and hard about human nature and how man was even capable of committing such atrocities. During those difficult years, she met a man, a priest who knew how to console and help her. His name was Fr. Karol Wojtyla.

It was with Fr. Karol that Poltawska began to collaborate to defend life and the family. In the interview she gave me in 2014, published in the book “Stories about Saint John Paul II. Told by His Close Friends and Co-Workers” (Ignatius Press, https://www.ignatius.com/Stories-about-Saint-John-Paul-II-P2367.aspx), this is how she explained his commitment to life: “During my imprisonment at the Ravensbrück camp, I saw the Nazis throw new borns into the crematoria, and all my life those heartrending images have remained before my eyes. For that reason I promised myself then that, if I survived, I would study and defend human life. (…) In 1956, in Communist Poland, the law on abortion was passed. I, as a physician, and he, as a priest, were alarmed by this anti-life decision. And we started to work together in opposition to that law. We made every effort then to save every single newborn child, every life that was still blossoming, and we went forward from there along that path”.

The sensitivity of many Poles to defending newly conceived life depends, among other things, on a certain "historical understanding" of their nation. Poles know full well that Nazi Germany, which occupied Poland for just over five years (1939-1945), introduced abortion immediately. In 1933, Adolf Hitler, while seeking to create a "master race", one which was pure and biologically powerful, legalised the killing of unborn children who had or potentially could have had birth "defects." In addition, it should be noted that the Nazi "lawmakers" protected the lives of healthy German children and fought for the demographic expansion of Nazi Germany. However, after the conquest of Poland, the Germans developed their "Plan Ost" (Plan for the East). It was a plan to exterminate the conquered nations of Eastern Europe, while recommending the extensive use of contraception and by legalising abortion in among the then-occupied nations.

Hitler’s Germany was not the first nation to introduce state-sponsored abortion. It was actually the Soviet Union. On November 18, 1920, following the successful Bolshevik revolution, Vladimir Lenin issued a directive to "demand the unconditional abrogation of all laws preventing artificial abortions." What was the result? It is estimated that, already in 1928, 41% of all pregnancies ended in abortion and, by 1934, the percentage rose to 72%. Meanwhile, at that time, laws all throughout Europe, were still in force to protect human life.

Being familiar with this history, we understand that abortion is not some democratic Western "conquest." Instead, abortion was introduced by two totalitarian anti-Christian political systems: Communism and Nazism. Unfortunately, after World War II, Soviet bloc countries followed Moscow’s example and legalised the "voluntary interruption of pregnancy."  Yet, in much of Western Europe (and the United States), abortion had not begun being legalised until the late 1960s.

Dr. Poltawska knows this history very well and, therefore, has suffered seeing what is going on in today's world. "I have no doubt,” she said, “that we are dealing with a coordinated public policy attack on Christian values, on the family and on medical ethics. Moreover, even the very values of humanism are already being questioned. Archbishop Henryk Hoser (a Polish bishop and trained physician) said that medical practice today increasingly resembles veterinary medicine. This is a natural consequence of the soul being removed from the image of man. As soon as only the body remains, humanity 'moves' completely into the realm of animals. Yet, man is not only made of just his body, but of his spirit as well. Nowadays, there is no more talk of man’s spirit.”

Unfortunately, abortion continues to spread throughout the world. There is pressure on countries and international organisations to even recognise abortion as a "right." Thus, Dr. Poltawska, directly from the pages L'Osservatore Romano, launched an appeal on May 15, 2020, for the 100th anniversary of the birth of John Paul II (May 18, 1920): "If we really want to honour the centenary of [John Paul II's] birth and his legacy, I see only one way to do so: to convert people so that they understand that every child and every person has the right to life. The only Lord of life is our Creator who loves His creation. I am sure that an international law prohibiting the killing of unborn children would be a 'gift' of humanity for this great man."

This "gift" arrived from Poland where, on St. John Paul II’s feast day October 22, the nation’s Constitutional Court ruled as “unconstitutional” any abortion of fetuses with birth defects. Its judges ruled that the right to life, protected by the Polish Constitution, is given to man at every stage of development, where he has the right to the protection of his human dignity, and therefore, even during the prenatal period. Hence, the Court sanctioned the unconstitutionality of eugenic abortion but still permits it to be free, legal and accessible only in cases of incest, rape and the endangerment of the mother’s life and health. This was a great victory for the culture of life in the now de-Christianised Europe. Unfortunately, in today's world there are most powerful forces that do not want to allow for any limits on abortion. These same forces have unleashed vigorous protests in Poland and with their threatening motto: "This is war." In their view, the Constitutional Court’s verdict was religiously motivated and conditioned by alleged pressure from within the Catholic Church. Consequently, in addition to attacks on the PIS ruling party’s headquarters, churches and religious symbols have be besieged. On Sunday, October 25,  demonstrators interrupted Mass celebrations, assaulted faithful, and desecrated churches with offensive and blasphemous graffiti. Faithful were forced to band together to defend their churches and sacred monuments from further profanation.

On her birthday, from the window of her Krakow apartment, Poltawska could see protesters gathered in the city’s huge square bearing signs saying "Abortion is OK.” Later she learned that in Poznan and Warsaw John Paul II monuments had been desecrated. Moreover, it surely didn’t please this medical doctor and victim of Nazi Germany to watch German Parliament (Bundestag) Vice President, Claudia Roth, holding up the same symbol of the Polish protest, a lightning bolt alongside the words: "This is war." The Germans already waged war once on Poland and at the price of 6 million deaths. It was the Germans who had introduced abortion into Poland. Seeing a high ranking German politician threatening Poles with "This is war", should make anyone shudder in fright.