“Viri probati? A grave rift in the Church”

Viri probati and deaconesses? “The Synod was disconcerting, the consequence of progressive ideology in the Church”. German schism? “Rome should intervene before it's too late, they're making scandalous plans”. Abuse of the clergy? “In the dioceses there are actual lobbies of gay priests”. Pachamama? “A pope like Leo the Great would never have allowed such aberration”. There's a bishop who speaks out openly and unreservedly about the crisis factors that grip the Church. He is Hector Aguer, Argentine archbishop who in this interview with the Daily Compass denounces all the consequences of post-Council over-progressivism. 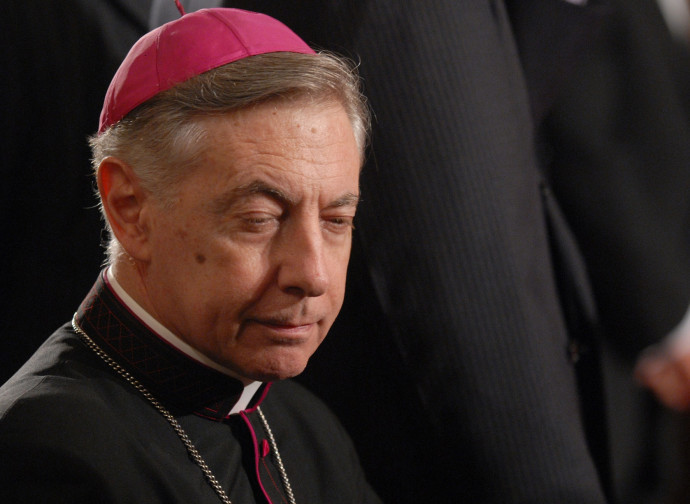 Viri probati and the German Church at risk of schism. There is a bishop who speaks out and who is not afraid to say things as they are: “It is a road incompatible with tradition, which is creating a serious rift in the Latin Church”. Speaking on the other side of the ocean is Hector Aguer, Archbishop Emeritus of La Plata. Argentinean from Buenos Aires, 76 years old, theologian, in his country Aguer conducts an intense influential activity in which he denounces the moral crisis of the contemporary world and does not hesitate to warn the Church against progressive drifts. In this interview with the Daily Compass, Aguer addresses the main crisis factors that are leading the Church towards a latent schism: from the ordination of viri probati to the schismatic efforts of the German Church, topics of great current interest given the end of the first part of the German Synod and the gossip about the Pope's apostolic exhortation at the conclusion of the Amazon Synod.

Your Excellency, the Synod of Amazonia dealt with viri probati and deaconesses. What would happen if the Pope were to give the go-ahead?The Amazon Synod was, in my opinion, a disconcerting event. The question of viri probati and deaconesses was raised long ago. With regard to the former, Cardinal Sarah, in his latest book, suggests a solution: to send priests from other regions of the continent to cover the shortages in that particular area. I believe that this gesture of ecclesiastical communion, which invites us to support the needs of the ecclesial Body, is perfectly feasible. With regard to the second: the promotion of women, in progress in the current culture – many “buts” should be added to this “promotion” – leads many to even consider the feasibility of a female priesthood. In the celebration of the 500th anniversary of the Protestant Reformation, the Lutheran hostess was a female bishop. I think that if Rome approved both these proposals of the Synod, there would be a serious split with the tradition of the Latin Church. These proposals are incompatible with that tradition: they are inspired by a “progressive” theology, developed over several decades. They do not respond to real needs, but to ideological positions. False solutions for false problems.

The Synod of the German Church is taking place. Do you fear the risk of schism?
In the German Church, for decades, theological programmes have been developing in contrast to the Catholic tradition. On the other hand, extraordinary theologians have flourished. Suffice it to mention one: Josef Ratzinger. And I would add his disciple, Gerhard Muller. I believe that the work of Karl Rahner has given a typical profile to German Catholic thought, cultivating doubt and relativism. In this way, a different climate has been created compared to the Latin world, involving an independence that displays traits of separation. The question of schism does not imply an explicit formulation: it can be an immanent, undeclared schism. The important thing is how faith is “felt”, how it is manifested in ecclesial life and with what intellectual instruments it is formulated. Various historical traumas also have their influence, such as the one created by Luther in the 16th century, the Protestant liberal theology of the late 19th century, and the development of a scientific biblical exegesis, which have projected themselves, in one way or another, into the Catholic world as a whole. I hope that in the Synod, the originality of Germany will manifest itself in such a way as to enrich the Katolike and that it will not detach itself from this Totality. A schism implies a collapse of charity, of ecclesiastical agape, inspired, in general, by doctrinal errors that jeopardise the homogeneous continuity of tradition. As Saint Vincent of Lerino said several centuries ago, the development or evolution of doctrine must proceed in eodem scilicet dogmate, eodem sensu, eodem que sententia. Some proposals already made by the Synod are simply scandalous; in my opinion, Rome should intervene before it is too late. Since the “German Church” would like to continue to be part of the Church of Christ, of the true Church and not of a “modern” imitation, which panders to the German Catholics of today, who are becoming fewer and fewer. And they are becoming fewer because of post-Council over-progressivism.

On the subject of abuse, Benedict XVI denounced the bad theology that has generated the bad conduct of priests and bishops. Is there a gay agenda that aims to condition the Church?
The problem set out in the question is very serious. In many dioceses there is a substantial number of priests with homosexual tendencies; it is well known that they usually meet in a kind of lobby, covering for each other and counting on obtaining prominent positions. It is no surprise if the same thing happens in Rome. The Magisterium of John Paul II and Benedict XVI has clearly indicated theological deviations in dogmas and morals. In this second area, I note that in many places, in preaching and catechesis, there is no mention of the commandments of God's law, contained in the Torah of Israel, which Jesus commented on and explained in the Sermon on the Mount and which is widely stated in the Catechism of the Catholic Church. On the sixth commandment, moreover, there is absolute silence. And this is not just a random remark: I have come across it in my academic and pastoral experience. Worse still, the metaphysical concept of nature is forgotten or set aside, as is the existence of objective and universally valid precepts corresponding to truly human behaviour. Moreover, a distorted notion of freedom, conceived in subjective and relativistic terms, has been spreading; many people do not admit that certain acts are intrinsically wrong because of their content. The perversion of abuse is correlated with the flaws I have spoken of: their cause is a lack of training and a decline of will in the experience of celibacy. There is a very clear protocol that does not allow the concealment or tolerance of such crimes that cause great harm to the Church and are endorsed by the mass media to denigrate the Church itself and cast a shadow of suspicion on all priests, when it is known that at least 80% of these criminal acts take place within the families of the victims or those close to them. Pope Ratzinger has distinguished himself by his clear and firm position on this painful issue.

As a Latin American bishop, who also knows the indigenous peoples, what do you think of Pachamama in the Vatican? Is there the risk of a fascination with idolatry, while the Mass instead loses the sacred?
Indeed, this curious paradox has occurred: the liturgy has been damaged by profanation and the abolition of solemnity and beauty; there are even bishops who argue that there should be no distinction between sacred and profane, and act accordingly. On the other hand, attempts are being made to promote unregulated cults, such as that of Gauchito Gil or of Difunta Correa, which count devotees among the population, among whom there is great religious ignorance. In the case of the Pachamama, many try to justify this cult by exploiting the Church's interest in caring for the land. The least that can be said is that these attempts are highly ambiguous and generate confusion. Pachamama in the Vatican? I imagine what the Fathers of the Church, Augustine, and Popes like Leo and Gregory the Great would think: they would never allow such aberration. This is the opportunity to recall a very curious case, that of the Jesuit Matteo Ricci, a missionary in China in the 16th century. To facilitate the acceptance of Christ by the natives, in front of the cross that he invited them to venerate, he placed an image of Buddha. An example of “mental restriction” in action.