Vanhoye, the Biblicist who said no to women priests

French Cardinal Albert Vanhoye, the oldest member of the Sacred College and a renowned exegete, died in Rome on July 29. Esteemed by Ratzinger, he became secretary of the Pontifical Biblical Commission and headed the working group that drafted “The Interpretation of the Bible in the Church”. It was a long-awaited document that, among other things, put a stop to the excesses of the feminist approach such as the idea of women priests, which Vanhoye took care to demolish in one of his writings on the Letter to the Galatians. 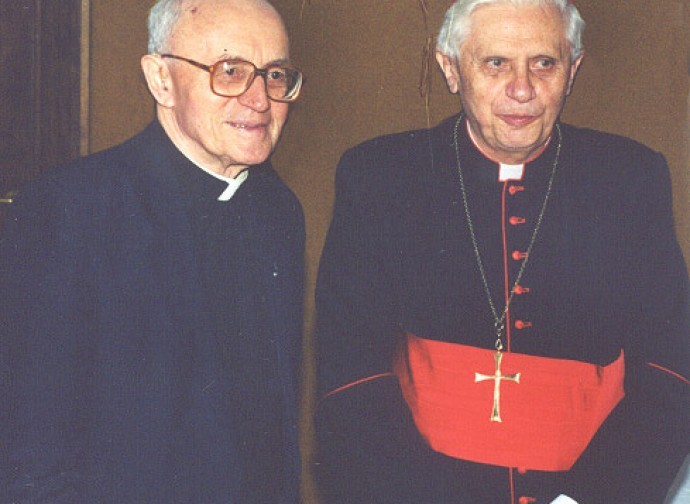 With Albert Vanhoye (1923-2021), who died in Rome on Thursday 29th July at the age of 98, we haven’t only lost the oldest member of the Sacred College but also the greatest living Catholic biblical scholar and exegete. An old-fashioned Jesuit, born in France a few kilometres from Dunkirk (famous for the evacuation of British soldiers in 1940), he was rector of the Pontifical Biblical Institute from 1984 to 1990.

1990 was the year of his professional encounter with Joseph Ratzinger, who engaged him as consultor of the Congregation for the Doctrine of the Faith, of which the then German cardinal was prefect, and secretary of the Pontifical Biblical Commission, of which he was president. Vanhoye was called to lead the collective work started in 1989 for the drafting of “The Interpretation of the Bible in the Church“, a long-awaited document on the subject published in 1993. Already at that time, the consideration that the current Pope emeritus had for the French Jesuit was evident, since he gave him carte blanche to manage a sensitive dossier.

Only two years before Vanhoye was appointed secretary of the PCB in place of the Sulpician Henri Cazelles - who had already begun work and was replaced along with ten other members of the Commission - the debate among practitioners had exploded following a conference in New York in which the then Cardinal Ratzinger had sharply criticised the method of the history of literary forms, complaining that the methodological approaches of the founders Bultmann and Dibelius had now “largely attained dogma-like authority”.

When “The Interpretation of the Bible in the Church” was published, several partisan experts accused the Pontifical Biblical Commission of working under the dictation of the hated Panzerkardinal. A scenario denied by Vanhoye himself in an interview in which he described his superior as “admirably discreet” during meetings and belied by the text itself which, as the Jesuit recalled in an important article, “openly defends the historical-critical method” but “affirms (... the necessity for a fully valid interpretation of the biblical texts”, thus defending it “against its own temptations” and in particular “against the temptation of historicism and that of getting lost in the sands of a hypercritical analysis”.

Asserting the autonomy of the Commission, Vanhoye explained in an interview that Ratzinger in New York had maintained that “the Formgeschichte had been founded on philosophical presuppositions contrary to the faith; we responded by pointing out that, in its essence, the historical critical method is not tied to the presuppositions of Bultmann and Dibelius, and that it is necessary to employ this method in such a way as to free it from any presupposition contrary to the Church”. The issue raised in the States by the future Benedict XVI, on the other hand, was a problem felt by Vanhoye himself, who liked to recall how “the Bible is not a collection of philosophical-theological treatises, it is not a didactic-symbolic path to acquire a set of eternal religious truths: the Bible tells of God’s initiative to enter into contact with mankind, in our history”.

Managing the debate in the Biblical Commission mandated to draft “The Interpretation of the Bible in the Church” was not easy, as demonstrated by the split - recorded at the request of the ‘losers’ - over the last subsection of the paragraph dealing with the feminist approach. When a tougher text was shelved, in the end the line of the members who, as the then secretary explained, “considered it necessary to firmly resist the excesses of feminism, which were seriously damaging to the Church”, passed with 11 votes out of 19 (4 against and 4 abstentions). A line shared by Vanhoye according to whom the “thought expressed by the text is true: feminist exegesis must not ‘lose sight of the Gospel teaching on power as service’”.

These were “excesses” that the Jesuit took care to refute, for example, in his commentary on the Letter to the Galatians, explaining that the denial of Paul’s distinctions present in one verse (Gal 3:28) “does not apply to all levels of human existence and not even to all levels of Christian life” otherwise “one would have to say that marriage between a Christian man and woman is impossible, since in Christ there is no male and female”. The great exegete thus extinguished the illusions of those who clung to this passage to plead the cause of women priests. In his book on the Letter to the Galatians  he wrote: “It is evident that the ministerial priesthood is not at the level touched by Paul’s denial of distinctions and therefore that the argument taken from the text to demand the priestly ordination of women is without value”.

When his former president at the PCB became Pope under the name of Benedict XVI, he soon remembered him and made him a cardinal in the first Consistory. In 2008, he also asked him to preach the Roman Curia’s Lenten spiritual exercises, thanking him for his meditations on the priesthood based on the image of Jesus washing Peter’s feet. Cardinal Vanhoye passed away a few days after his 98th birthday, in the Roman residence of the Jesuits “San Pietro Canisio”. The Church has lost a giant who, commenting on the Letter to the Galatians, with Paul invited to always defend Christian freedom because “the risks, in fact, must not make us abandon the doctrine”.