US Bishops on the Eucharist, nice words contradict practice

The long-awaited and widely discussed document by the US bishops on the Eucharist correctly re-proposes the Church's doctrine which is its treasure, but contradicts itself in not foreseeing  ways to defend it. It privileges the unity of the episcopate as a facade and the will to avoid political tensions in respect to Christ and the lives of millions of children. 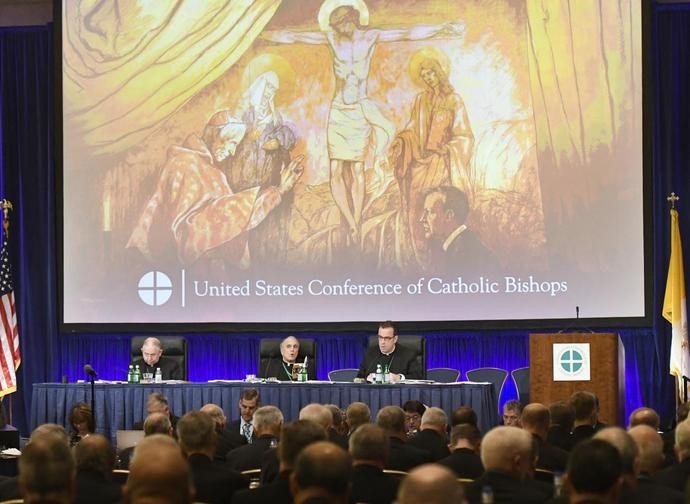 Just the day before, certainly not coincidental timing, Vatican News published an interview with one of the most controversial American bishops, Cardinal Roger Mahony, archbishop emeritus of Los Angeles, against whom a charge is pending for abusing a 17-year-old boy in 1986. Putting that fact aside, Mahony is well known by American Catholics in pro-life circles for his staunch opposition to withholding Communion from politicians in favor of abortion or other grave public sins. While Mahony has never wanted to offend the powerful; the Cardinal, does not hesitate to show his zeal when it comes to trampling the humble. As occurred with Mother Angelica, the heroic founding sister of the Eternal Word Television Network (EWTN), guilty of having openly criticised the Archbishop of Los Angeles for some of his liturgical "inspirations". Mahony strove to ensure that the poor nun suffered ecclesiastical censures; he even went so far as to threaten her with being unable to receive the sacraments if she did not make amends with a public apology.

This is the same person who threatens to withhold the Eucharist because of his touchiness, but is open to dialogue with the supporters of the extermination of innocents, and who was chosen by Vatican News to try to influence the American bishops. A hypocritical appeal to grasp the "outstretched hand" of sixty Catholic members of Congress, obviously Democratics, who, according to Mahony, would like to "collaborate with us in many ways and they gave a whole list of ways we could collaborate beginning with reducing as much as possible the need for abortion and the occurrence of abortion". Very moving. These men of providence, “they want to help us in their rule do what we want to do. And it’s incredible”! Being such an opportunity not to be missed that it prompted him "to make an open statement to my brother bishops", so that they may place themselves in a spirit of dialogue.

It is not known how much weight Cardinal Mahony’s appeal carried; the fact is that, as anticipated, there is no trace of the minister of the Eucharist’s obligation in the document, according to the norm of can. 915, to refuse Holy Communion to those who obstinately persevere in grave sin openly.

The idea of a "Eucharistic Revival" as contained in the document can only be welcomed; by re-proposing, the Catholic doctrine on the Eucharist as sacrifice and sacrament, emphasising the transformation of the bread and wine into the Body and Blood of Christ, is praiseworthy and more appropriate than ever; to highlight the communion effected by this sacrament with Christ and his mystical Body is absolutely commendable. The doctrinal exposition on the Eucharist appears integral and well structured, with more than one truly excellent passage; many interconnected aspects that make explicit the fundamental affirmation of the whole document and that is, "there is no greater gift that God could give us".

But what is taught in words is then denied in practice: by the choice of not wanting to assume an awkward position in order to defend this immense and insuperable gift from the continuous public sacrilege that takes place every time well-known personalities, who publicly trample the law of God, go to receive the life of God.

The document correctly affirms Catholic doctrine that the Eucharist should not be received if one is aware they are in a state of grave sin, because, not only will the sacramental grace not be received, but one "commits the sin of sacrilege, failing to show the reverence due to the sacred Body and Blood of Christ "(§ 43). It also reiterates that the reception of the Eucharist in these conditions "represents a contradiction", because on one hand, the communion with Christ and the Church is broken with one's actions, but then on the other, one presumes to receive the sacrament of communion with Christ and with the Church.

But does the US episcopate not fall into a similar contradiction when it affirms the reverence the Eucharist is due, warning against committing a sacrilege, but then does nothing to prevent this from happening? In words it prevents it taking place, but in practice permits everything? The decision to remain silent on this point, most likely motivated by the need not to reveal the profound internal division within the American episcopate, creates a contradiction between word and practice. In words we argue that the Eucharist is the greatest treasure of the Church, but in practice nothing is done to protect this treasure. As if on the one hand, signs demanding the historical-archaeological heritage be respected and protected were placed everywhere at the Colosseum, but on the other hand anyone is allowed to enter and to do whatever they like.

People are more affected by actions than by words. Unfortunately, the American Church has given a signal of weakness and lack of faith, preferring a quiet life within the Church, as well as between the Church and the State, rather than protecting the treasure of the Eucharist with all its might. Moreover, it only had to recall an already existing canonical norm: it was not a question of being pioneers.

On one side of the scales was Christ, the Life of the world; there was the defense of millions of innocent lives; there was the gravity of the sin of sacrilege. On the other, the attempt to maintain a facade of episcopal "communion" and to avoid political tensions. The second won. Let them take all the initiatives they want for this so called “Eucharistic Revival”.  But the facts speak for themselves, whatever the risks, presumed or real, they were not worth running to defend the Eucharist.

And yet, precisely on the truth of His Body and of His Blood, Jesus had not hesitated to risk losing all his disciples (cf. Jn 6:67). Saint Ambrose had not feared running the real risk of losing the episcopal see of Milan, and perhaps also his life, when he publicly excommunicated the Emperor Theodosius, for having massacred 7,000 people in Thessalonica. Here we have people who support the systematic slaughter of the lives of millions, billions of unborn children and they are afraid to deny them Communion.

The message was heard loud and clear, in clear contradiction with the text of the document: neither the Eucharist nor the defense of innocent life are as important as our internal equilibrium.