Increased military spending, the purchase of armaments, increased number of soldiers, voluntary military training: in Poland, war is not only considered inevitable, but for many it is even an opportunity to settle the score with Russia. And the hottest front is currently the one with Belarus. 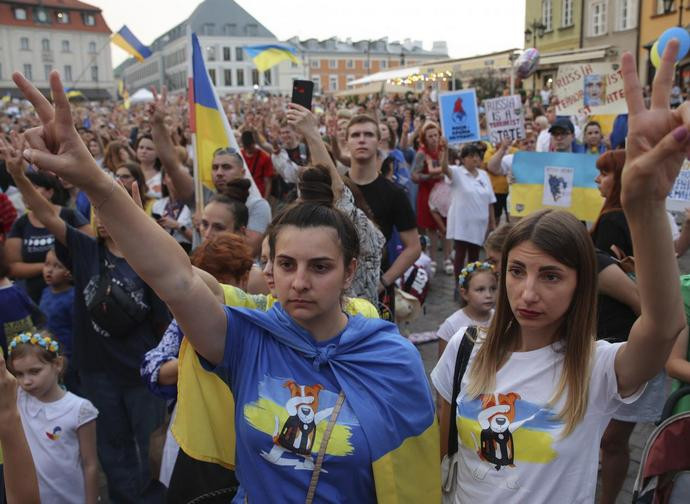 Every year I go to Poland and, on my return, I am often asked how the world looks from there. This year I was asked the same question again, with the addition: “Are they worried about the war?” The topic, then, is the war between Russia and Ukraine. This is my answer to readers of the Daily Compass who are also curious..

Poland is preparing for war. Seriously. It awaits the delivery of 250 Abrams tanks from the USA, in addition to other armaments, it has purchased from Korea 48 FA-50 fighters.  The government has announced that military spending will be raised to 3% of GDP and the armed forces will be increased to 300,000. This is not the end of the story: state companies, primarily the Polish Post Office (the reference is, of course, to the heroic resistance of the employees of the Westerplatte post office) are encouraging employees to undertake voluntary military training.

Have these measures caused any protests, given that the second most discussed topic in the Polish media is galloping inflation? Not at all, on the contrary: rather than being frightened by the war, the Polish people seem to be waiting in anticipation. They have been for about eight years: while for us the war began on 24 February 2022, in Poland events from the Donbass have been followed daily since 2014. Ukrainian flags fly in almost every shop and there is no TV programme in which the now iconic yellow and blue colours do not appear (the photo shows images of the march in Warsaw on 24 August for Ukrainian Independence Day).

War, in Poland, is not only seen as inevitable; it is even seen as an excellent opportunity to finally settle the score with Russia. I myself have heard older men exclaim: “But can't we invade Russia? Then we'll be done with it once and for all”. Yes, because the Poles' idea of the Russian army is of a disorganised and incompetent bunch of thieves and alcoholics, who wage war in order to steal washing machines and sanitary equipment. For this is the message that the media unanimously conveys to Poles, chiming perfectly with the memories of the older citizens who witnessed the Soviet invasion in 1939. And Germany's hesitant attitude towards the conflict is seen as a repetition of the Ribbentrop-Molotov pact.

What unfinished business does Poland have with Russia, apart from the atrocities committed during World War II and the almost fifty years of disguised occupation? Just as Germany considers Poland its lebensraum, or breathing space, so Poland has not yet digested the westward shift of its borders after 1945; Lviv, for example, is still considered a Polish city by Poles. If this is surprising, consider that under the ashes still smoulders the Międzymorze project of General Piłsudski, who emulated Mussolini and is considered father of the Fatherland. This project, also known as Intermarium, envisages a federation of states (Poland, Lithuania, Belarus, Ukraine...), roughly corresponding to the former Polish-Lithuanian state, stretching from the Baltic to the Black Sea, the Sea of Azov and the Adriatic; obviously under Polish leadership. This project, dubbed Trimarium and strongly supported by NATO (click here), should serve the strategic purpose of keeping German technology separate from Russian resources.

This sounds like political fantasy. But Polish President Duda declared last May that between Poland and Ukraine “there will no longer be borders”; and Ukrainian President Zelenski promoted a bill that would grant special status to Polish citizens in Ukraine. Political fantasy? We shall see.

For now, there is certainly the possibility of a widening of the conflict, for example between Poland and Belarus. There are harsh frictions between the two states, which intermittently flare up and cool down. It is enough to recall the migrant crisis on the border between the two states; or the recent case of the Belarusian journalist Iryna Slaunikava, accused of organising collective actions against the state and who has risen, in Poland, to the role of a martyr for freedom of expression against authoritarian regimes; or the Polish journalist Andrzej Poczobut, detained in Belarus for “inciting national and religious hatred”.

It is difficult to say what will happen; it is clear that a widening of the conflict, or even a world conflict started from a Polish spark, is nothing new in recent history; that the chessboard is much wider than the border between Poland, Belarus and Ukraine.
For now, Poles are learning to use American Abrams and teaching postmen to shoot.