The ambassador of Kiev has protested because during Good Friday’s Way of the Cross with the Pope at the Colosseum, a Russian and a Ukrainian woman will carry the Cross together. For the first time, the media is criticising Pope Francis. But it is a courageous choice because in the Cross lies the source of peace. 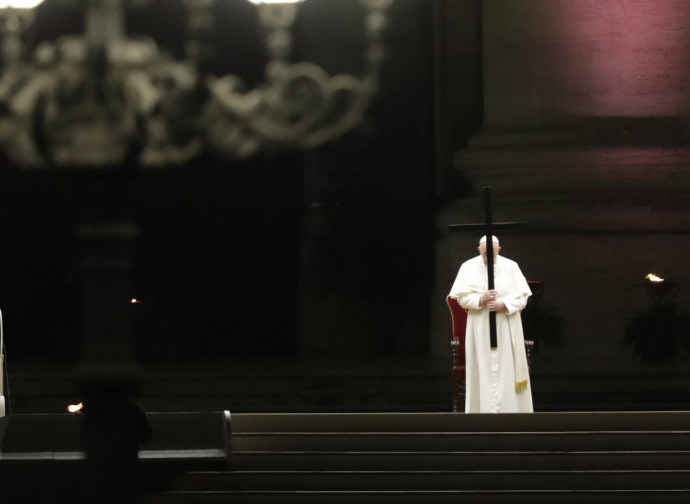 Benedict XVI said that "it is precisely in the Cross of the Lord, in love without limits, which gives all of itself, that lies the source (...) of peace". Unfortunately, however, this year's Way of the Cross at the Colosseum is tinged with controversy because of the planned presence of a Russian woman - next to a Ukrainian woman - at the Thirteenth Station. They are two nurses from the Centre for Palliative Care "Together in caring" of the Fondazione Policlinico Universitario Campus Bio-Medico in Rome, the Russian Albina and the Ukrainian Irina.

The initiative has not pleased the Ukrainians who, through the Kiev ambassador to the Holy See, Andrii Yurash, expressed concern "at the idea of putting an Ukrainian and a Russian woman together to carry the Cross during Friday's Way of the Cross at the Colosseum". The diplomat wrote on Twitter that they are "working on the issue, trying to explain the difficulties of its implementation and the possible consequences".

The intent of the original programme was explained in an article published in L'Osservatore Romano, the Holy See's daily newspaper, in which Fr Massimo Serretti wrote that “the fact that two members of two warring peoples (one the aggressor and the other the victim) stand together beneath the Cross of Christ, while appearing to be irrelevant from a worldly point of view, turns out to be decisive as an indication of the path to be followed” because “beneath the cross, the way is indicated as well as the secret of solid unity”.

It is clear that the Pope's decision was not intended to equate the two parties involved in the conflict, but this was not enough to shield him from controversy. In a climate that is certainly not  untroubled for the Russian population in the West, with the recent news also in Italy of Molotov cocktails being thrown at the homes of Russian owners, posters with insults and threats put up in Naples, university courses on Dostoevsky cancelled (and reinstated after protests), Francis' gesture in view of Good Friday could have been a courageous signal to call everyone to common sense: an invitation to not blame the people for the wars caused by their rulers. Also because the Way of the Cross was not to be attended by a representative of the Moscow government, but by a Russian nurse studying in Italy. For the umpteenth time since the outbreak of the conflict, however, the Holy Father's position has not been understood by those who have criticised him on social media and, unfortunately, not even by the Ukrainian authorities.

Ambassador Yurash's tweet gave voice to a discontent that seems to have spread in Kiev's institutional circles. Yesterday, ANSA spoke of a "diplomatic incident for the Pope and the Holy See" as well as a "real gaffe". This is a harsh judgement that seems to confirm the fact that the Vatican's line on the conflict is not very popular with most of the Italian media, which in turn have never been so harsh with the current Pontiff.

Previously, we had even witnessed the director of the main national TV News channel expressing perplexity live on air about the papal choice to visit the headquarters of the Russian embassy to the Holy See. In the past few hours there have also been those who have tried to present the homily of Moscow Patriarch Kirill against "internal and external enemies" as a slap in the face to Francis and his appeal on Sunday for an "Easter truce". In reality, this difference in tone does nothing but confirm the otherness of the Church of Rome, which can afford a language that is very different from that of state power, unlike elsewhere: it is not a defeat, but a success for the Pope.

Francis, as a spiritual leader, is committed to finding a peaceful solution that is unlikely to come about through the exclusion or delegitimisation of either side. Unlike other spiritual leaders, he is not a political leader, although he has not remained silent about guilt and responsibility for the conflict. The decision to invite a Russian woman and a Ukrainian woman to carry the Cross together is a courageous choice. An anti-war gesture for which there will be no applause, but criticism. But as his predecessor said: "If I had continued to receive only acclaim, I should have asked myself whether I was really proclaiming the whole Gospel". And in the Gospel, the mission order of the risen Jesus is: "Go therefore and make disciples of all nations".