Trump: “standing in solidarity, not surrendering to hostility”

"What we are seeing now on the streets of our cities has nothing to do with justice or with peace." After he condemned the killing of George Floyd and expressed solidarity to his family, president Donald Trump warned the responsible of the violence that have spread across America. But it won't be an easy task. 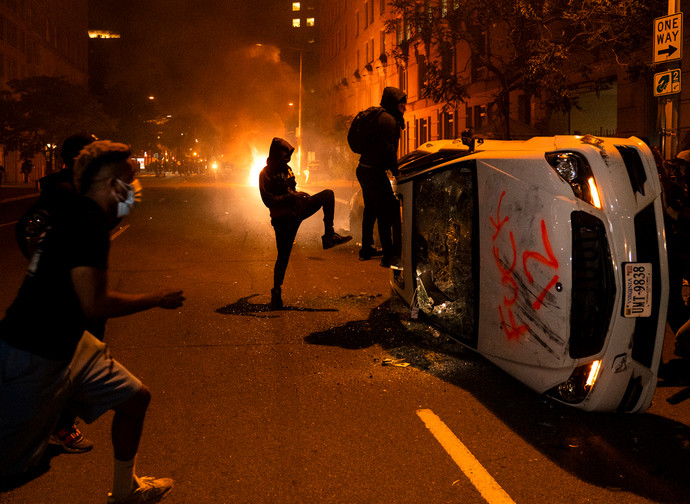 On 30 May, from NASA’s Cape Canaveral headquarters, U.S. President Donald Trump took a moment to assess the absolute injustice of violent revolts that have quickly spread across America in the wake of African American George Floyd’s death, who died tragically last week as a result of brutal police detainment. Trump did not mince his words about the inane arson, lootings, and physical violence that have quickly divided America, a nation still suffering from 3 months of draconian COVID lockdowns that have left 40 million unemployed, fearful and starving. These riots have added fuel to the American inferno, wreaking havoc in at least 12 major cities as of today.

Trump's address, made in anticipation of congratulating NASA-SpaceX’s joint historic launch into outer space, wholeheartedly condemned the mob violence that first erupted in Minneapolis. Over the weekend, organized violence resulted in several more commercial operations being burned to the ground and completely looted of merchandise. Hundreds of cars, vans and trucks were set ablaze with homemade firebombs, including vehicles belonging to law enforcement, ambulance services, fire departments, and many other first-responders. Trump activated national guardsmen to calm the chaos that escalated into innocent bystanders receiving beatings from masked men shouting “kill the white folk.”

"The death of George Floyd in the streets of Minneapolis was a grave tragedy. It should never have happened. It has filled Americans all over the country with horror, anger, and grief," Trump said. During his nationally televised speech, Trump confirmed he had previously telephoned Floyd's family "and expressed the sorrow of our entire nation for their loss."

Trump was then quick to say that no violence done in retaliation for Floyd’s murder was justified. It was a total “dishonor”, he said, and took advantage of the situation to push forward other subversive ideological agendas.

The president echoed the harsh words of two other prominent American black mayors, Melvin Carter of St. Paul, the twin city of Minneapolis, and Atlanta’s Keisha Lance Bottoms, whose formerly segregated city was the heart of the 1960’s civil rights movement. Bottoms told the instigators of riots that they have no right to be on the streets and “should go home right now.” Even Alveda King, Martin Luther King Jr’s niece, told Fox News in an exclusive interview that the violent eruptions were a total disgrace to her heroic uncle’s legacy for peacefully transforming the American black community.  “We must stop the violence…. If my uncle Martin Luther King Jr. [were here today]…he would  go home and pray.”

"What we are seeing now on the streets of our cities has nothing to do with justice or with peace," Trump sternly reiterated. "Those making excuses or justification for violence are not helping the downtrodden, but delivering new anguish and new pain," he said in reference to hundreds of urban owners, many of whom are black, who had their lost homes and life’s savings as apartments and commercial real estate went up in flames.
“My administration will stop mob violence, and we'll stop it cold. It does not serve the interests of justice or any citizen of any race, color, or creed for the government to give in to anarchy, abandon police precincts, or allow communities to be burned to the ground. It won't happen."

Trump’s words of warning confirmed what he stated in two separate tweets about what violent protestors would face if attacking the White House or causing any further unwarranted destruction elsewhere. Thuggish protestors would be "greeted with the most vicious dogs, and most ominous weapons" and he reminded them that "when the looting starts, the shooting starts."

“I stand before you as an ally, for every American seeking justice and peace. I stand before you in firm opposition to anyone exploiting this tragedy to look, rob, attack, and menace. Healing, not hatred, justice, not chaos are the mission at hand.” For Trump, organized mob violence is destroying American dreams: “Right now American needs creation, not destruction, cooperation, not contempt, security not anarchy. And there will be no anarchy,” he said.

We must give due attention to what Trump meant by claiming his “firm opposition to anyone exploiting” the wrongful death of George Floyd. Trump alluded to what he would state a few minutes later, casting blame on “anarchists, Antifa and other radical left-wing groups who are terrorizing the innocent.”  He then tweeted that Antifa would be officially designated a domestic terrorist organization, therefore granting U.S. intelligence agencies the power to procure search warrants and make federal arrests of its members.

Evidence released this weekend on social media demonstrated that some riots are being funded, perhaps by Antifa or similar groups. The video shows a bearded white man handing over cash to one black protester while barking orders for him to use instruments of violence and obstruction: “There’s more stuff we can put out here and there’s [sic] three picnic tables over there.”

The problem with President Trump’s bold announcement against Antifa as a terrorist organization is that it is known, to their great benefit, that they do not have a clear hierarchy or web site. Being the most secret of secret societies, it will be extremely difficult for Trump’s administration to track down their specific ringleaders. Additionally, there are legal problems, since the U.S. government has not defined well what it may do to sanction or criminalize domestic terrorist groups.  As the New York Times reports:

"Antifa is not an organization, and it does not have a leader, membership roles or any defined, centralized structure. It is a vaguely defined movement of people who share common protest tactics and targets. More important, even if Antifa were a real organization, the laws that permit the federal government to deem entities terrorists and impose sanctions on them are limited to foreign groups. There is no domestic terrorism law despite periodic proposals to create one….When the F.B.I. has investigated neo-Nazi organizations like the Base and Atomwaffen Division, it has treated them as criminal enterprises.”

Hence, President Trump will have to outsmart domestic terrorists, like Antifa, by playing by their own game, by not revealing his cards so openly. Now that Antifa knows they are targeted, they will surely morph into subsets of ever more clandestine criminals bands.
Trump will have to outsmart terrorists also by not playing by their game. It will bode well for Trump to play peacemaker and show his true solidarity with the American black community, and at a time when pastoral virtues will pay huge dividends of trust and confidence. Trump will then be credible, and not just a wordsmith preacher from a NASA podium pointing to outer space, but acting for real life right here on Earth. The American president must truly show some concrete sign of collective grief, that as Americans “we are working toward a more just society…[which ] means building up, not tearing down, joining hands, not hurling firsts, standing in solidarity, not surrendering to hostility.”