Trump has already won over Christians, the poor

The first televised debate between U.S. presidential candidates, Donald Trump and Joe Biden, was essentially a draw. A notable American correspondent for Italian media and author of “The Lone Warrior” (on Trump's re-election challenge), Glauco Maggi, said Trump did not do as well as he could have. On the other hand, debate viewers have now also seen how weak the Democratic challenger, Joe Biden, really is. Now the test is winning the hearts and minds of undecided Americans in the last critical month before voters head to the polls in early November. Trump has already done the impossible, as a New York billionaire and accused “racist” winning over the vote of the poor, Christians and, ever more so, the vote of African Americans. 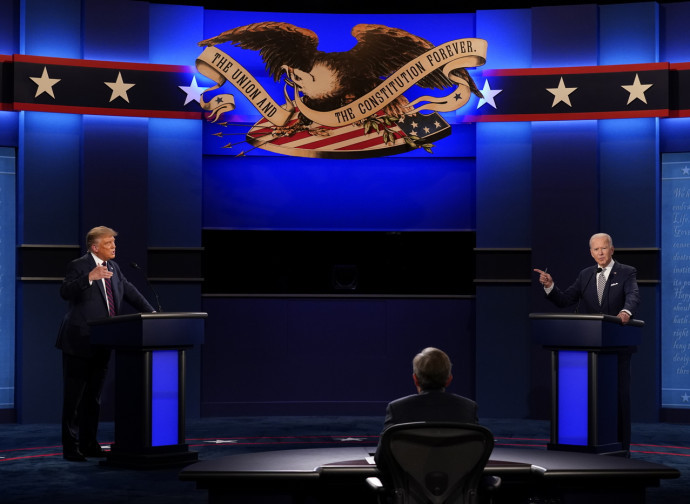 "It was a draw," said Glauco Maggi, the New York-based correspondent for Italian media, following the first televised debate between Donald Trump and Joe Biden. The Daily Compass asked Maggi who actually benefitted from the draw.
"Elongating the football metaphor, it is the type of draw that is to Trump’s disadvantage,” Maggi said. “Because he had a huge home field edge, both in terms of the energy and the arguments themselves,” said Maggi.

“He missed some easy penalty kicks, especially when it came to economic issues. He could have simply summed up the extraordinary results of his policies, as he had done in his last State of the Union address. Instead, he acted like a wisecracker.”
“On the other hand, Biden's own flaws, contradictions, and reticence were evident, particularly when he avoided answering questions about law and order,” Maggi continued. “Biden was also unclear on issues that might have set him apart from the far left wing of the Democratic Party –for example, when he said he had his own 'green plan' different from that of Alexandria Ocasio Cortez’s Green New Deal. One of Trump's biggest mistakes was the exaggerated way he kept attacking Biden. If he had let Biden finish talking, he would have obtained considerably more impressive results."

Maggi, a "contrarian" by profession and keen observer of American politics, has distinguished himself, in recent years, for never having spoken ill of Donald Trump. Thus, he is one of handful of journalists to behave in this way.
During the previous administration, Maggi was, instead, one of the few critical voices of Barack Obama among jouranlists. A few weeks ago, Maggi published Il guerriero solitario. Trump e la Mission Impossible  (“The Lone Warrior: Trump and the Mission Impossible”) on the U.S. incumbent’s challenge to reelection as the Republican president. It is a "mission impossible", explains Maggi, “because I can't say Trump is winning. All the polls and analysis show him far behind his Democratic challenger, Joe Biden. But he has several chances to recover, and with a surprise final shot. Plus, the more Antifa and Black Lives Matter riots continue in American cities, the more his chances increase" of winning in November.

We asked Glauco Maggi to explain in more detail how he sees the American presidential race unfolding. What follows is the remainder of his unedited interview with the Daily Compass.

During the presidential debate, questions arose regarding the Supreme Court appointee, Amy Corey Barrett, who is both a Catholic and a conservative. How did Biden, who’s also Catholic, react?
Biden raised the proverbial white flag of surrender. Last week, following Justice Ruth Bader Ginsburg’s sudden passing, progressives literally went insane, reliving that ugly page in their history book when Supreme Court Justice Brett Kavanaugh’s nomination was hotly contested [and lost]. Biden must have realized he couldn’t say a bad thing about Amy Coney Barrett. Contrary to Kavanaugh, Barret’s personal and professional life provide no grounds for harsh criticism. So it is now certain that Trump will make history with her appointment. It is little wonder why the president is liked by the religious [right] ... In three and a half years Trump has appointed three conservative Supreme Court judges, an unprecedented fact in the U.S. For evangelical Christians, above all, Trump is like a Messiah.

How sincere is Trump when he talks about religion and religious principles?
Trump's religious sensitivity is grossly underestimated by the American media. It is never taken seriously. There has been talk of his appearance at the March for Life. He was the first president ever to participate directly. The important point is that he has been "militant" in his defense of religious liberty and the right to life. It is obvious to everyone that Trump is thinking about the Christian vote, especially the evangelical electorate, especially since American religiosity had fallen to all-time lows during Obama's two terms of office. Democrats are now advancing atheistic positions, and like never before in their party’s history. The Democrats have alienated a huge part of the American voting population. Trump seized on this opportunity, but is doing so with great sincerity. He didn’t all of a sudden put on a Christian mask. He is actually religious. He and his family are believers. He attends church and is devout. And he’s very open. For example, he peacefully accepted his daughter Ivanka conversion to Judaism. It’s incredible how he has created a voting block centered on the Judeo-Christian values which are now opposed by Democrats. This is particularly evident in pro-Democratic universities, where openly anti-Christian sometimes even anti-Semitic thought is taught and practiced and where Islamists, like Ahmadinejad, are unscrupulously invited to speak on campuses yet Christian public prayer is seen as highly problematic.

How can such an anti-Christian electoral bloc support Biden, potentially the second Catholic president in U.S. history, after Kennedy?
It is, above all, about them forming an anti-Trump and, not so much, a pro-Biden coalition. Their common goal is to block Trump from serving another four years. Plus, even atheists don’t have a major problem voting for a Catholic. In the American socialists’ most recent manifesto, as led by Alexandria's Ocasio Cortez, Joe Biden is actually seen as the "least worse" option. The radical left will plug their noses and vote for him anyway, because Biden is at least always better than Trump and his values. “Dissenting” Catholics" will willingly vote for a progressive Catholic president, anyway. Abortion is the key issue when it comes to understanding who voters choose in the end.

Is abortion still a subject of debate in America?
Yes, very much so. In the U.S. abortion is now practiced in extreme circumstances. It is currently legal in Virginia to kill a baby who has survived an abortion, even when born alive outside the womb, but with the mother’s consent. This law should shock anyone. It is the last frontier of a world that loves to define itself, very hypocritically so, as "pro-choice", which is a feminist term originating in 1968. It is shocking when there is a refusal to think about simple facts like “birth”, and much less “life” which in itself is sacred. Their sole aim is the "liberation" of women and their bodies.

Who are Trump's voters? What does the voter landscape look like today?
To be a successful real estate mogul in a market like New York City, Trump had to develop a very strong character and a penchant for brawling. He's still like this, as we just saw in the first TV debate. Even more than a "lone warrior", Trump is the man taking on the system. He's different.  He's not the one who likes being accepted by everyone, but by a loyal minority that loves him because they appreciate his authenticity. In the early 2000s, on the hit TV reality show The Apprentice, Trump created the character of an entrepreneur with showy arrogance. It appealed to managers, business students, and the general public. Paradoxically, Trump is a billionaire who appeals to a working class electorate. I just visited Maine and in rural counties you can see a majority of Trump-Pence election signs in front yards. To find Black Lives Matter signs, on the other hand, you have to look for them in the richest neighborhoods, in ritzy parts of town. The geography of political passion has been turned upside down: the poor are Republicans and the Democratic Party is Hollywood's party. The Democrats are liberal billionaire philanthropists, star players of major sports teams, university professors and students. Once it was unthinkable that a billionaire from New York, a place alien to the American heartland, would become the champion of the masses. But Trump succeeded in doing just this. And he's won over the religious electorate as well. He has done a lot for religious freedom, not only symbolically, but in practice. Still so few people notice that Trump's religious battle is making headway in the African-American community, who until now were utterly Democratic. African-Americans, indeed, hold very conservative values. Recent surveys show that their consensus is shifting, slowly but significantly [toward the Republican party]. If Trump were to win even only 15% of the black vote, compared to 8% in 2016, the current balance of power would be reversed.