Trump and Viganò: a dialogue that reads current events in a Biblical key

U.S. President Donald Trump sent a tweet showing his enthusiastic support for the open letter  Archbishop Carlo Maria Viganò wrote to him, that speaks of a fierce battle underway between the children of darkness and the children of light. It is a reading of current events that follows the same line as the prophecies of John Paul II and the judgments of Benedict XVI. Viganò notes that at this juncture President Trump is the only international authority capable of standing up to the global power which is intent on destroying freedom, which has taken advantage of the Covid crisis and which is stirring up revolts in the United States, with even harder times still in store. 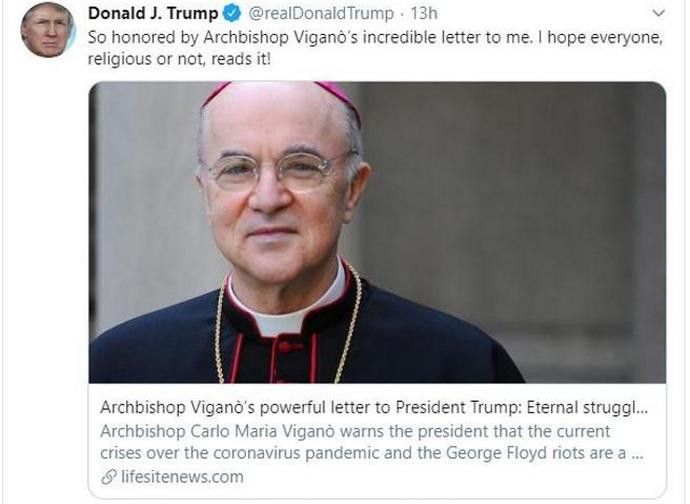 “So honored by Archbishop Viganò’s incredible letter to me. I hope everyone, religious or not, reads it!” So U.S. President Donald Trump tweeted on Wednesday evening, June 10, in response to the open letter of encouragement that Archbishop Carlo Maria Viganò wrote to him on Sunday, June 7. Viganò is the former Apostolic Nuncio to the United States who gained fame because of his renowned written testimony about the McCarrick cover up which he issued in August 2018.

Obviously news of this reciprocal attention between the American President and Archbishop Viganò delighted those who are always trying to demonstrate the existence of an international conspiracy – led by the American right – against Pope Francis. Paradoxically, these same people denounce as conspiracy theorists those who declare the existence of a New World Order agenda that threatens the freedom of individuals and of nations.

In reality, the exchange between Viganò and Trump demonstrates that it is not an obscure plot but an original reading of the events the world is now witnessing, a “Biblical” interpretation, as Archsbishop Viganò calls it. In fact he describes it as a battle between “the children of light and the children of darkness,” a division that “follows the clear separation between the offspring of the Woman and the offspring of the serpent.” And the children of darkness, although they are a minority, hold notable power because “they often hold strategic positions in government, in politics, in the economy, and in the media.”

Darkness against light. It is an interpretive key of history described very clearly in the Gospel of John, which Archbishop Viganò uses to judge the tumultuous news of recent months and more generally everything that is taking place in the world. The former nuncio to the United States focuses on two specific aspects of the crisis – the management of the Covid emergency and the unrest fomented in the United States – as part of a “ferocious campaign” against Trump and as a way to justify further repressive actions. With regard to Covid, Viganò points his finger against the way the crisis was manufactured: “We will probably find that in this colossal operation of social engineering there are people who have decided the fate of humanity, arrogating to themselves the right to act against the will of citizens and their representatives in the governments of nations.” In the same way, he condemns the unrest that has been fomented, with perfect synchrony, in both the United States and Europe, behind which “there are those who hope to profit from the dissolution of the social order so as to build a world without freedom.”

Archbishop Viganò’s letter echoes the document that he issued on May 8, to which he makes reference, which is an appeal to the Church and to the world to react against the “Invisible Enemy” that is profiting from various crises – such as the coronavirus – to implement its agenda of destroying freedom and instituting a form of world government that is controlled by an aligned thought. This appeal was signed by dozens of prelates and academics, including the former Prefect of the Congregation for the Doctrine of the Faith, Cardinal Gerhard L. Müller, and the Kazakh bishop Athanasius Schneider.

In his letter to President Trump, Archbishop Viganò draws attention to how this invisible enemy is focused today on the goal of eliminating Trump, preventing his reelection at all costs (one could say, paraphrasing the late Cardinal Carlo Caffarra, that today only a blind man could not see the fierce and deceptive campaign against the American President). “For the first time,” Viganò writes, “the United States has in you a President who courageously defends the right to life, who is not ashamed to denounce the persecution of Christians throughout the world, who speaks of Jesus Christ and the right of citizens to freedom of worship.”

Viganò notes that today President Trump is the only authority in the world who is opposing this negative power with all his might, a power that unfortunately even many pastors “are subservient to,” betraying “their proper commitments before God.” And Viganò promised prayers for him and the American nation “in this dramatic and decisive hour for all of humanity,” hoping at the same time that “those of good will wake up from their sluggishness and do not accept being deceived by a minority of dishonest people with unspeakable goals.”

There are many ironies that can be read in the tone and arguments used by Archbishop Viganò, and arguments as to whether or not it is the proper competence of a bishop to take initiatives that have a “political” flavor. But it is clear that he is describing the present situation according to that which Saint John Paul II prophesied when he declared that the Third Millennium would see the decisive battle between God and Satan over man, because, since Satan cannot directly attack God, he tries to strike at the crown of His creation, the one who is created in the image and likeness of God. For this reason, life and the family are the principal objectives of this battle.

This is exactly what is happening. The spiritual and eschatological dimension of this battle was also taken up by Pope Benedict XVI in his final discourse to the Roman Curia on December 21, 2012, when he recalled that gender ideology represents the subversion of the order established in Creation: “God created man, male and female he created him.”

In the light of the words of Saint John Paul II and Benedict XVI, we can better understand the present weakness of the Church precisely on the themes of life and the family. There is not much that is ironic: whether we like it or not there is a furious battle underway, and its true nature is spiritual and eschatological. Viganò’s words will probably give Trump a greater awareness of the stakes that are in play – as the President’s tweet would seem to indicate – but unfortunately just at this moment an important part of the Church seems to have lost its ability to read current events and history in light of the Final Judgment and has instead conformed itself to an aligned thought.

What is certain is that, precisely for this reason, we should expect even more difficult months ahead as we approach the upcoming American presidential election. The order is clear: the president who takes funding away from pro-abortion organizations, who defends religious freedom, who opposes the LGBT dictatorship, who challenges globalist ideology, who opposes the New World Order, must not be re-elected, at all costs.