When the coronavirus emergency is over, nothing will ever be the same again. The present crisis reveals the emptiness of ideologies like naturalism and globalism and the disintegration of the European Union; it asks us to reconsider our concept of the common good, the subsidiary function of credit, and the relationship between Church and State. What is happening today should become a reflection on how to reconstruct the world after the crisis. Here is a broad reflection by Msgr. Crepaldi based on the social doctrine of the Church.
- THE INTEGRAL DOCUMENT 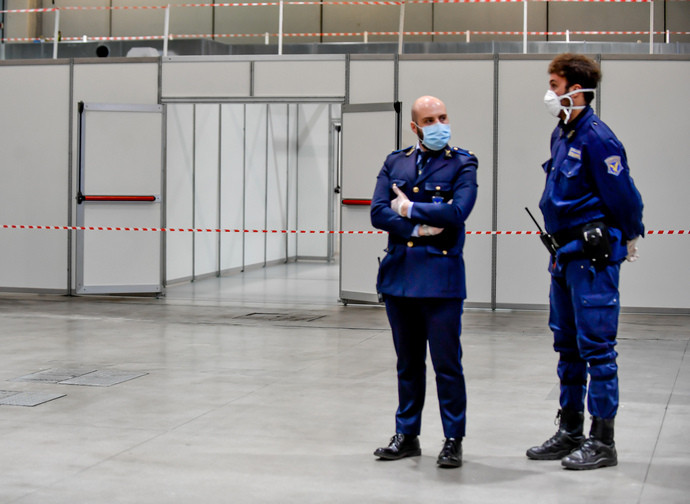 The Archbishop of Trieste, Giampaolo Crepaldi, has offered a powerful reflection in this difficult hour about what will follow the coronavirus epidemic. The archbishop is one of the greatest experts on the social doctrine of the Church, which touches the heart of today’s crisis. Last Sunday, during his homily in the Cathedral of Saint Justus in Trieste, he said that after this experience of Covid-19 “nothing will be as it was before.” In the following days he put together a broad reflection on the present situation and above all on the post-coronavirus situation, which he makes public today with the title: “Coronavirus: Today and Tomorrow.”

The lengthy reflection of Archbishop Crepaldi is important, because not one prelate has yet invited us to reflect on the post-coronavirus situation, and, above all, no one has yet reflected on the present situation in the light of the social doctrine of the Church. The Archbishop published his reflections himself, and they were reprinted by the Cardinal Van Thuân Observatory for the Social Doctrine of the Church.

All of us today would like to go back to the way things were before, and this is understandable. But if, as the Archbishop says, “nothing will be as it was before” after this difficult experience, then we ought to reflect deeply on the post-coronavirus situation. The epidemic, Crepaldi notes, is in fact not only a public health emergency, but it touches on and upends all social realities, shedding light on the many weaknesses of our entire system of life. It is enough to think of the fragility of the economic system. The prospect of a massive economic crisis is leading some to say that the economic danger is even greater than the health danger caused by the infection. Crepaldi cites a passage from Benedict XVI’s 2009 encyclical Caritas in Veritate that is extremely relevant: “The current crisis obliges us to re-plan our journey, to set ourselves new rules and to discover new forms of commitment, to build on positive experiences and to reject negative ones. The crisis thus becomes an opportunity for discernment, in which to shape a new vision for the future” (21).

The present experience requires us to abandon the ideological naturalism that was so in vogue up until yesterday, even within the Church. Crepaldi writes: “Nature, in the naturalistic sense of the term, also produces disequilibriums and illnesses, and for this reason it must be humanised. It is not humanity that must be naturalised, but nature that must be humanised.”

After the crisis there will be a need to recover a true sense of the common good, which is presently being displayed by the moral commitment of so many. Crepaldi notes unfortunately that “at the same time that we are fighting to save the lives of so many people, procured abortions are not stopping, nor are sales of abortion pills, nor the practice of euthanasia, nor the sacrifices of human embryos and many other practices against life and the family.” If the crisis does not lead us to make a deep examination of conscience, it will not predispose us to something new.”

An important point highlighted by the archbishop is the subsidiary role of credit: “The blockade of large sectors of the economy in order to guarantee greater public health security and to diminish the spread of the virus places businesses and families in a state of economic crisis, above all a crisis of liquidity. If this lasts a long time, then we are looking at a crisis of both production and consumption along with the spectre of unemployment. In the face of these needs, the role of credit is fundamental, and the financial system could redeem itself from many reprehensible dilapidations of the recent past.” It will take a major change of perspective in this area.

According to Archbishop Crepaldi, the current pandemic places globalism in crisis as it has been thought of up until now, and it invites us to rethink the co-existence of nations at various levels of universality by way of subsidiarity: “Up until yesterday, globalisation presented itself confidently and was convinced of the glories of technical functioning, it held as indisputably certain that states and nations are obsolete, and it believed in the absolute value of the “open society”: a single world, a single religion, a single moral universe, a single world people, a single world authority. But then it only takes one virus to make the system collapse, since non-global response levels have been disabled.”

With very clear words, the bishop also invites us to “take note of this inglorious end of the European Union that has been brought about by the coronavirus,” in which “the institutional and political glue did not make up for the lack of moral glue.”

The relationship between Church and State also must change: “Health is not salvation, as the martyrs have taught us, but in a certain sense salvation also brings health. The good functioning of social life, with its beneficial effects including health, also needs the salvation promised by religion: “Man does not develop through his own powers” (Caritas in Veritate, 11). “Political authority weakens the struggle against evil when it thinks of Holy Mass as something that is not all that important, thinking that it can be suspended. The Church can also be mistaken when it does not value the public need for Holy Mass and the need for churches to remain open.” After this experience, Crepaldi says, we will be able to return to publicly recognising the place of God in the world and no longer continue to live as if God does not exist.

This text by Archbishop Crepaldi is a great resource for us to read and meditate on, so that the post-coronavirus situation – aided by the light of hope that comes from the social doctrine of the Church – can truly be a better world.