The three black holes of the Synod that endanger the Church

The path that will culminate in 2023 with the Synod of Bishops has at least three black holes. The first is that there is nothing synodal about the way it is being conducted, which confirms Pope Francis' imperative attitude. The second black hole concerns listening, flawed by the fact that it has already been decided what to listen to and what not to. The third is the idea of introducing liberal democracy into the Church which distorts the Church itself. 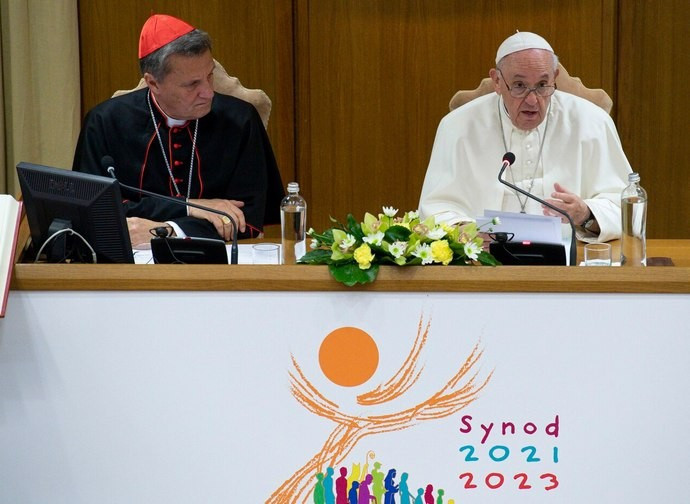 The synodal path on synodality, which will end in 2023 with the actual Synod of Bishops after the long 'listening phase', has several black holes that make it very problematic and begs us not to be naive.

The first of these black holes is that there is nothing synodal about the way it is being conducted. The final document of the US synod states that 0.01% of the faithful participated in the listening phase. In practice, a small group that only listened to itself and enjoyed the sound of its own voice. It is Pope Francis above all who is pushing the accelerator, and he does so in a non-synodal but imperative manner. His pontificate is characterised by no less than 53 Motu proprios, more than those of his two predecessors put together. The bishops are squeezed between him and the bishops' conferences, and synodality is impeding collegiality.

Appointments at the top of the Synod's leadership are already demonstrating a desire to direct or even determine it. After all, this was also the case for previous synods, starting with the Mother of all synods, the one on the family in 2014/2015. That this one on synodality is a one-way street is demonstrated by the slogans that are slavishly repeated in the final documents of diocesan synods and the reference bibliography provided to synods.
Even the theologians most in favour of the synod, such as mons. Giacomo Canobbio, note the contradiction of a synod on synodality pushed forward centralistically. In the current issue of 'Studia Patavina' Canobbio notes “a danger even in the teaching/behaviour of Pope Francis: on the one hand he wants to involve everyone in the synodal process, on the other it is still he who determines the paths of the Bishops' Conferences, not least the Italian one”. This haste to fast-forward synodality by imposition casts an ambiguous political light on the entire process underway and confirms that it is a synodality decided a priori and imposed.

A second black hole concerns the attitude of listening, posited as fundamental at this stage of synodal preparation for the Bishops’ Synod. Everyone sees that the listening is flawed insofar as it is already geared towards listening to this and not that. It is also an instrumental listening to lead things where one wants them to be led. In addition to this, the attitude of listening is compromised by a confusion between the sensus fidei of the faithful and the category of people proper to the relevant “theology of the people”.

This problematic connection has been theorised by Francis on several occasions. The sensus fidei, or “instinct from the faith” according to Francis occurs with the breath of the Spirit and causes the baptised faithful to enjoy a certain connaturality with divine realities from which derives a wisdom in discernment. On this he bases the need for listening within the Church, to avoid oligarchic structures and clericalism. To this, he then associates the theology of the people, since a certain connatural assistance of the Holy Spirit would also exist outside the Church, in the people as people. This is why listening must also address the distant. By people is meant humanity, the world, so that there would be a parallel between the Church and the world, an equality in listening. The idea certainly conforms to many currents in contemporary theology, but this does not cause concern (quite the opposite). The danger of thinking of the people in a sociological sense is looming and the move to claiming that the breath of the Spirit is present in today's LGBT claims is next. These bases are a very equivocal foundation for the Synod.

The third black hole is the wish to introduce modern liberal democracy into the Church. The aforementioned Giacomo Canobbio stated it clearly: “to imagine that the verification [sic!] of the sensus fidelium does not open the door to forms of democratisation of the Church is to fall into a form of spiritualisation of ecclesial life”. If synodality - Canobbio goes on to say - is to be translated into decisions in a synod, "experiences borrowed from democratic societies cannot be set aside". From his point of view, he is right: if democracy verifies (sic!) the sensus fidelium, then the Church must be democratic.
Today, the decisions of the synods are placed in the hands of the bishop or the pope, but the prospect is of a new synodality, in which the decisions of the Synods, taken democratically, will no longer have to refer back to the pope or the bishop because in this case one would fall back into clericalism; “If it is still up to him [the pope] to say the last word, there is a risk of paving the way for new oligarchic structures”.  The democratic vote would attest to the presence of the Holy Spirit in synodal decisions. A radical promotion of modern procedural democracy, traced back to no less than the demands of the incarnation, but in reality it is historicism.

If we put these three black holes together, one wonders whether the Church that will emerge from the synod on synodality will still be the Catholic Church. Alarm is extremely high, even if very few people say so.