The story of Gerard, the Sister who comforted death row inmates

Singapore: life for a number of prisoners would have ended very differently if it wasn’t for the presence of a Catholic nun. Sister Gerard Fernandez was just 36 when she walked her first inmate to be hanged. From 1981 to 2017 she accomplished the difficult mission to guide the sentenced to death back to the faith and lessen their fear of death 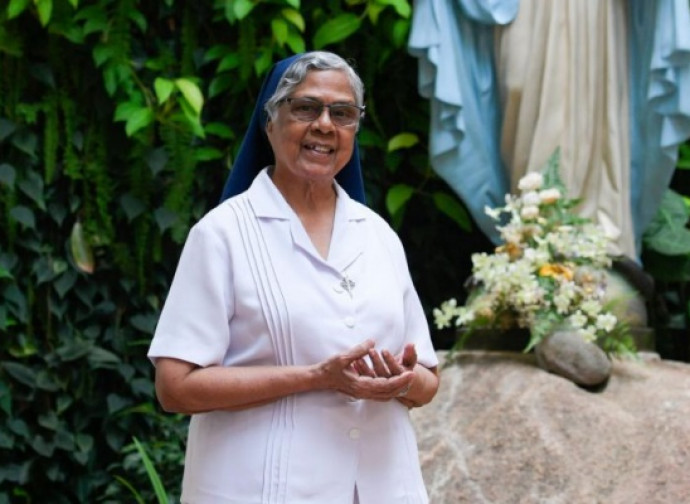 Life for a number of prisoners would have ended very differently if it wasn’t for the presence of a Catholic nun in Changhi’s high security prison in Singapore. Sister Gerard Fernandez was just 36 when she walked her first inmate, Tan Mui Choo (Catherine), to be hanged. On that final morning, Tan wore a blue dress with a sash and shoes that matched to her execution. “She was very calm,” Sister Gerard Fernandez recalls, “as we held hands on the final walk to the gallows. I sang Tan's favourite hymn How Great Thou Art as she entered the hanging chamber”. “I heard her walk up the spiral staircase and felt the lever when it was pulled. The trap door opened and that was when I knew Catherine was gone.”

It is only recently that the world came to know of Tan Mui Choo’s story behind bars or those of the other 18 inmates that Sister Gerard has walked to the gallows as a volunteer councillor during the last four decades. She is a Sister of the Order of the Good Shepherds from Singapore and her story surfaced after it earned her a place in the 2019 BBC list of the100 most inspiring and influential women from around the world. She recounts her experience willingly now that her mission, which lasted from 1981 to 2017, has come to an end.

It was Tan Mui Choo’s story (Catherine) that brought about a dramatic turn in Sister Gerard‘s “calling for people who are broken.” Back in 1981, Singapore was badly shaken by the brutal killings of two children by a temple medium Adrian Lim, his wife Tan and his mistress Hoe Kah Hong to perform a Toa Payoh ritual (blood sacrifices to the Hindu goddess Kali).The case affected Sister Gerard very deeply because she knew one of the victims Agnes Ng who was only nine-year-old, as well as one of the murderers Catherine Tan. All three were sentenced to death. "When I walked in, to visit Catherine for the first time, says Sister Gerard, she looked at me with her sad eyes which said: 'You haven't condemned me. Please help me change'." For seven years, until the three of them were hanged in 1988, Sister Gerard visited Catherine weekly to pray with her and guide her back to her Catholic faith. The story of their friendship inspired a short film, Sister.

A second high profile case involved a Catholic Filipino, Flor Contemplacion. She killed a fellow domestic worker and her four year old charge in 1991. “Flor was very angry when her request for clemency was rejected” and she in turn rejected everyone else including me, explains Sister Gerard. “I asked my friends and fellow parishioners to pray to Mary for Flor to overcome her anger” and when I visited her a week later, Flor was “all excited” and told me “Mother Mary came into my cell”. “I asked Flor to describe their meeting and this is what she told me:”  “Mary was dressed in white with a blue sash” and said to me, “don’t worry, don’t be afraid, I am with you”. Flor also went to her death in peace.

Not everyone who sought Sister Gerard’s support was Catholic. Kumar, a convicted murderer for example, only asked to speak to Sister Fernandez the night before his execution. He told her how her presence in the prison had brought him comfort during his time on death row and that he had listened to her singing. His last words to her were: “ I am going to see God in the morning and when I do, I will tell him all about you.” “You see, explains Sister Gerard, “being allowed to journey with them and lessen their fear of death... is a very special vocation”. “He was preaching to me.”

Australian drug trafficker, Van Tuong Nguyen, 25, who was hanged in 2005, asked Sister Gerard to stay by his side in his final moments. “My heart is full of love. Because I made a vow of chastity, it frees me up to love everybody,” she says. But, “that would have been too traumatic for me”.

Singapore state is a leader on the world stage in many fields and is renowned for its speed and efficiency. When the Covid lockdown prevented in-court hearings, judges continued essential cases in remote. Last May the death sentence was given to Punithan Genasan, 37, for his role in a drug deal that took place in 2011. It was the world’s first death sentence via Zoom.

The death penalty in Singapore is largely ruled for drug trafficking and murder which its government maintains keeps murder rates at one of the lowest in the world and drug trafficking under control. But the personal stories of these prisoners behind bars that put human faces to the statistics is why Sister Gerard longs for an end to the death penalty in her beloved Singapore. “Life is precious.” “Every person is worth more than the worst they have done," she says. "No matter one's sins, everyone deserves a death with dignity." Justice is served when a soul is redeemed.

Saint John Paul II in The Gospel of Life wrote: ‘ Today, in fact, as a consequence of the possibilities which the state has for effectively preventing crime, by rendering one who has committed an offence incapable of doing harm— without definitively taking away from him the possibility of redeeming himself—the cases in which the execution of the offender is an absolute are rare, if not practically non-existent.

Sister Gerard doesn’t shy from admitting that working in the system at it stands is difficult and “very painful”. When she wondered out loudly to a priest that she often “ asked herself, what am I doing here, they are killing them, yet they are going so peacefully”. He replied, sister it’s because “good has triumphed over evil”.

Without adding, changing or removing

And he strictly ordered them not to make him known. (Mark 3, 12)