The silence of surrender

The global lockdown crisis represents the definitive assault on the foundations of western civilization, built on the principles of Christianity. But even more than the surrender of politics, law and the media to the new tyrants, the silence of the Christian leaders is striking, as if God had nothing to say in this situation: a white flag of surrender that invites the barbarians to finally assault the citadels of Christianity. 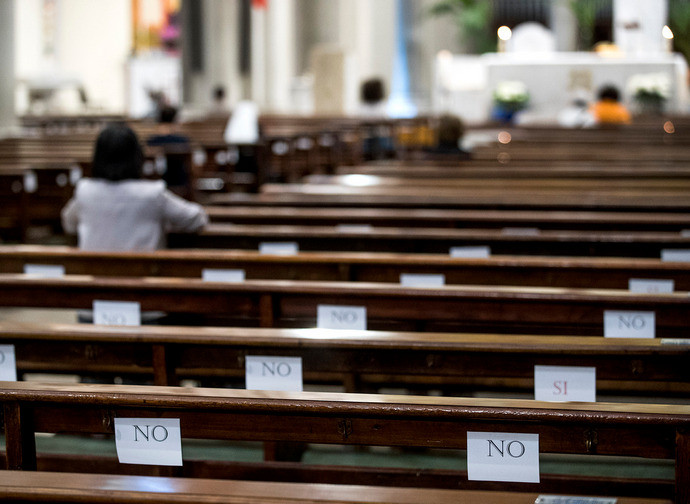 The global lockdown crisis, at least in as far as its logic and freedom-larceny has penetrated the West — Europe. America etc. — might be described as a possibly final and lethal attack on the Four Estates of modern society, which is to say of the human community that has endured through two millennia as a result of the proposals of Jesus Christ for a world in keeping with its true story of Creation.

Though their meanings and designations have been fluid through time, these estates, through the evolution of Western civilisation — which is to say Christendom — have been the pillars sustaining and supporting this historic social and spiritual order through its period of growth, consolidation, apotheosis and recent decline. Though shifting, merging, reducing and multiplying through time and governmental trend — from monarchy to democracy and now, it seems,  to something else —  the Four Estates have remained until recent times as the pillars of good authority, governance, leadership and education that have ensured the survival, expansion and prospering of the greatest civilisation the world has ever seen.

The estates, or “estates of the realm” as they began, have shifted through time. Early on, the understanding was of a division between nobility, clergy, bourgeoisie and peasantry; later, as societies became more institutionally based, the concept shifted to convey something closer to the separation of powers in government: executive, legislature, judicial arm and press.

The term “Fourth Estate”, referring to the press, was coined in the House of Commons in 1787 by the Irish philosopher-politician Edmund Burke, speaking in a debate to mark the opening of parliament to the press. He referred first to what were at that time considered the “three estates”—the clerical lords of the realm, the secular lords and the House of Commons— and then, indicating the press benches, said, “There sits a Fourth Estate more important far than they all.”

In our time, then, we have seen concept of governmental estates shift again as, in the waves of secularism that have swept across Western civilisation since the Enlightenment, the churches have become more and more marginalized, their role and function usurped by such as artists and celebrities. Nevertheless, it can be said that, in as far as intellectual leadership is concerned, the four pillars have continued to be commonly understood as politics, religion, law and communications media.

In the Covid-19 crisis of this spring of 2020, we have observed what appears to be a terminal assault on all four, a massive cultural coup that now threatens to overwhelm and supplant the core nature of democratic society understood in broadly Christian terms. As the days, weeks, months of this lockdown unfold, the once relatively tranquil West has experienced increasing alienation and despondency, arising from the sudden eruption of unemployment, business closures, widespread poverty and growing hardship, social dislocation, increased crime and violence, loss of homes and property due to unpaid loans, ill health due to anxiety and depression, collapse of small firms and family businesses, enormous job losses, ‘deaths of despair’, including suicides, alcoholic and other addictive episodes etc.  — all of which will in turn result in a diminution of overall personal and public health and well-being, utterly nullifying and overwhelming the claimed objectives of the lockdown exercise.

The statistics of the “pandemic”, on the face deeply dubious, now reveal themselves as being arrived at through exaggeration, manipulation and falsification of fatality rates. The statistics pointing to the consequences of the ‘lockdown’, however, are staggering and already, even at this early stage, depict a civilisation in crisis. Shops, stores, and businesses have been forced to shut. Industrial output has plummeted. Schools and colleges are closed. The streets are empty, the sports facilities are shut, as are theatres, cinemas, coffee shops, restaurants, bars, and just about any amenity found in a normal, civilized society. People have been ordered by the Government to remain indefinitely in their own homes (with one short exercise break a day) and not to have social interaction with anyone outside their immediate family. Those over 70 are forbidden to leave their homes at all. Even under wartime conditions the people of Great Britain, under daily attack by German warplanes, were not subjected to such draconian constraints. Their country was at war and threatened with imminent invasion, and yet normal life was still possible.

Under the sway of global medical organisations and scientific experts, the political class of the West has essentially saved in, rolled over and surrendered its representational responsibilities, essentially announcing martial law at the behest of unelected  and largely invisible figures on the basis of a middle-of-the-range influenza-type illness. The media, the famed Fourth Estate of Edmund Burke’s christening, has adopted the role of propaganda arm of the insurgency, refusing to question the coup in any significant aspect. The judicial arms of government have, in the main, shown a willingness to acquiesce in the logic and imperatives of what on its face appears to be no more than a colossal spook, if not indeed a complete hoax. In my own country, Ireland, I have sought to take court action against the terms of the globally templated lockdown instituted by the Irish government in Holy Week, but so far have been greeted with obfuscation, evasion and hostility. In the past week a judge has rejected our bid to have the relevant legislation judicially reviewed.

But, perhaps worst of all has been the performance of the Churches, not necessarily because they refused to open their churches, although that is where it begins, but much worse in that they have refused to open their mouths to speak to their own faithful people over the heads of the tyrants who have been inflicting such wounds on our civilisation and our communities.

For the first time in living memory, church services have ceased, with churches closed. At a time of enormous stress and anxiety, people have been denied the comfort of religious observance and ritual, often without as much as the slightest exploration of the possibilities of “social distancing” within churches and other options for safeguarding the health of congregations and militating against the spread of the virus. For many older and devout people this amounts to cruel and inhuman treatment.

That the Christian faithful have been denied access to their churches, to the sacraments, through this horrific Easter period of 2020 is to me something unforgivable. That people who have lived their lives in the bosom of the Christian community have been left to die alone, not merely without the comfort of the accompaniment of their loved ones, but also without the ministrations of a priest of God is an infamy that I believe can never be expunged from human history. That these Christian faithful have been hastily buried by huddled groups of masked and terrified family members, without the attendance of beloved friends and neighbours, while the leaders of the churches allied themselves with the responsible globally tyrants, is something that is, I believe, irrecoverable.

That there have been almost no words of good authority coming from those charged with responsibilities of spiritual leadership and blessed with the courage of their faith is for me the most potentially terminal aspect of the present crisis. For if these supposed leaders of the churches  do not speak out of courage about Christ, and about what Christ means, does that not suggest a belief on their part that — as other elements of the culture insists — it is all meaningless? That there is no God who has a Plan for mankind? That all now resides with science? That they have raised the white flag of surrender to invite the barbarians to finally storm the citadels of Christendom?

Is this not what the silence means? If not that, then what?