Under the pretext of anti-racist protests, vandals destroyed a statue of St. Junipero Serra (1713-1784) in San Francisco. Serra was a Franciscan who evangelized California and travelled hundreds of miles to baptize and evangelize native American Indians. He knew how "to meet many people, learning and valuing their particular customs and ways of life," as Pope Francis said when canonizing him a saint. 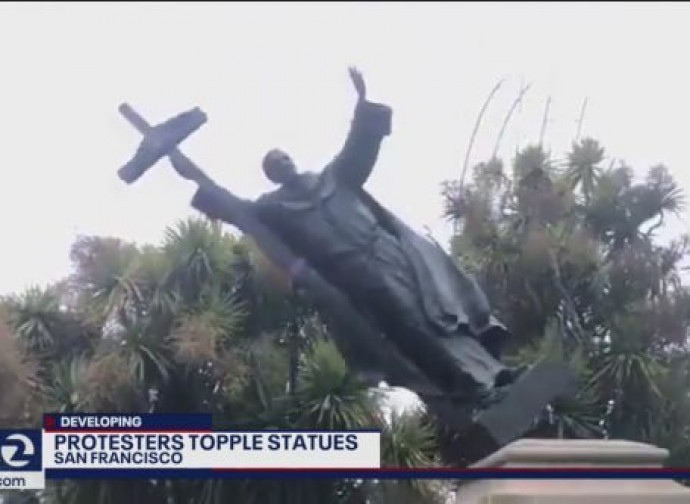 Is there a nation more ruthless and bloodthirsty than the Spaniards? Of course, not. The legend of Spanish black racism has been imposed everywhere, and to such a degree, that there is no need to provide evidence. That’s just the way it is.

Are there Indians and mestizos in Latin America? Yes, and in great numbers. Are there Indians and Mestizos in North America? Very few and living on reservations. However, because it is known Spaniards were the worst colonizers of all time, and since it is equally well known that the Catholic Church was just as inhuman, violent and bloodthirsty, we must hurry to demolish all statues of St. Junipero Serra (1713-1784 ), the Franciscan and Apostle of California. Why? Strange as it may seem, it must be done in the name of "Black Lives Matter", that is, in defence of those black Americans who were reduced to slavery and who, until just few decades ago, were segregated from the American white community. Were they treated like that by Franciscans and Spaniards? No, but by WASPs (White Anglo-Saxon Protestants).

All major Californian cities have been named after saints and angels: Los Angeles, San Francisco, San Diego, Santa Barbara, Santa Fe Springs, Sacramento, to name a few. Who gave these municipalities such strange names? None other than genius of missionary entrepreneurship, Junipero Serra. This happened in the mid-eighteenth century when the enlightened despot Charles of Bourbon (a great name no doubt) ruled from Madrid. Through his enlightened reason, King Charles ordered the suppression of the Jesuits Order, which included the immediate forfeiture of all their assets. Having expelled the Jesuits from the American missions in 1767 (they had to leave within 24 hours), the Spanish crown asked the Franciscans to take replace them.

This is the context in which the theologian Junipero Serra and a native of Palma de Mallorca worked with tireless energy, despite the great suffering a leg injury gave him. He often travelled hundreds of miles on foot in order to baptize and confirm American Indians. St. Serra planned and, for the most part, built the Camino Real: a road that runs along the northern and southern California coastline. It is a route lined with 21 fortified Catholic missions, more or less a day’s walk away from each other. These missions gave protection to the friars and provided defence from Indians who were often aggressive (does anyone know anything about the Calvinists who exterminated them?).

Even today the beautiful missions built by Serra and his fellow Franciscans exist to show how the American Indians were evangelized. At the centre of each mission there is, of course, a church. Built into the missions’ perimeter walls were various workshops where Indians learned necessary crafts and trades. If you want to admire something “ancient” in California, you must visit these Franciscan missions.

Did Serra and other Franciscans commit genocide? No, as in the rest of America, many Indians died from epidemics. Is Serra a racist? Pope Francis, who canonized him, said Serra knew how “to meet many by learning to respect their customs and their characteristics" and "to defend the dignity of the native community, to protect it from those who had mistreated and abused it."  Nonetheless, a statue of St. Junipero Serra has just been destroyed in San Francisco, while vandals in Spain defaced his monument in Palma de Mallorca with blood-red paint. Hatred towards our history and identity has returned with a vengeance – the very same hatred that sent Jesus to die on the cross.