The Scapular: Mary’s way of clothing us with Christ

The devotion of the Carmelite scapular has its roots in the 13th century, a gift of the Blessed Mother to offer protection from the fires of hell. Saint John Paul II was wearing it on the day of the assassination attempt on his life, and that scapular, soaked in blood, has become a relic. 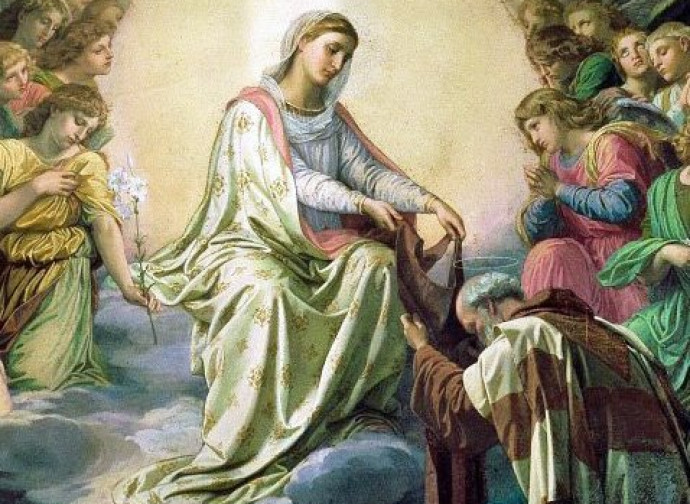 At the beginning of the 13th century, when the Holy Land was freed by the Crusades and became once again a place of pilgrimage, among the sacred places that was most loved and sought after by pilgrims was Mount Carmel, inhabited by a few Latin Rite hermits who had built a church to the Holy Virgin, honored by her as “Lady of the place.” In those years a true “poetic story” was handed down there, telling of an ancient familiarity between the Holy Family of Nazareth and the community of “the sons of the prophets” (descendants of Elijah) who had lived there for centuries on the holy mountain of Carmel.

Those medieval hermits considered themselves to be the privileged heirs of that ancient story and that particular familiarity with the Holy Virgin. When they were driven out by the Saracens and had to migrate to the West, they arrived unknown and unwanted.

This is the context for the story of Saint Simon Stock (Superior General of the Carmelites), who in 1251 implored the Virgin to grant his brothers a sign of particular protection. In answer to his prayers he received the Scapular (a part of the habit already in use) with this burning assurance: “Whoever shall die wearing it shall not fall into the fires of hell.”
It was the evident Marian passion of the Carmelites and the evident protection of the Holy Virgin to save them.

The devotion to the Scapular spread to all the Christian nations, and the Order was accepted and esteemed in the Church, to the point that the Supreme Pontiffs did not hesitate to say in their official documents that “the Blessed Virgin Mary gave birth to Christ and gave birth to the Carmelite Order.”

Returning to the Holy Virgin’s promise, we must not overlook the fact that in the Middle Ages the question of one’s ultimate destiny (salvation or damnation) was the decisive question that Christians knew they had to ask themselves. That one could be saved only in the name of Christ and within his Church was an absolute conviction: a conviction therefore, that concerned one’s own salvation and one’s own damnation. In addition, the conviction had spread that in order to be saved a serious covering was also necessary: and the laity could find it precisely in the religious habit.

Thus, in those centuries there was a widespread practice that today would make us smile (even if traces still remainto this day): the laity would ask for the grace of being buried wearing a religious habit of an Order to which they felt spiritually close. There were those who chose the Benedictine habit, the Carthusian, Dominican, Franciscan, Carmelite, or that of some other Order. And these lay people had a share in the merits and prayers and suffrages of the Order, and the Church guaranteed them particular indulgences. Thus the gift of the Scapular, made by the Virgin to Saint Simon Stock, had this immediate value: the Blessed Mother confirmed to her Carmelite children the security given by that sacred covering against all dangers, even those of hell.
By doing so, however, she also addressed all the faithful, showing that Carmel was a refuge of eternal salvation.

With appropriate corrections given by ecclesiastical authority – which were all made with the sense of linking the exterior garment to a heartfelt devotion – the practice of wearing the Carmelite scapular spread in an extraordinary way, practically inheriting (and preserving to this day) the immense flow of devotion with which the Middle Ages turned to Mary and ran to take refuge under her merciful mantle. With the passing of the centuries and the maturing of theological reflection, the vision of the sacred habit which was meant to preserve us from hell matured towards the joy of having received a habit to prepare us for the joys of Paradise.

It is worthwhile now to recall the foundations and theological content of this devotion, retracing the path from the end to the beginning: starting, that is, from the greater clarity that we possess today and tracing back to the holy roots from which we still draw sap. The sign of the garment is, among all others, the one that best evokes the Biblical world in general and that of the Holy Family in particular (we could say: the world of the Incarnation, the world of Nazareth). It also has the advantage of being elementary, that is, simple and modest, but it can lead us to the deepest mystical depths.

And since all devotion to the Scapular throughout history is based on the certainty of repeated papal approval, today it is worth highlighting this fact: recent popes have deliberately introduced a new element into the ancient Carmelite devotion, that intends to enhance the contribution of the last two Marian apparitions: the appearances of Mary as the Immaculate Conception at Lourdes which concluded on the evening of the Feast of Our Lady of Mount Carmel (July 16, 1858) and those at Fatima, in which Mary specifically asked for the consecration of the world to her Immaculate Heart, an apparition which she concluded on October 13, 1917, appearing clothed in the holy Carmelite habit.

John Paul II, in his Message addressed to the Carmelite Orders on the occasion of their 750th anniversary (2001), explicitly affirmed that “the most genuine form of devotion to the Blessed Virgin, expressed by the humble sign of the Scapular, is Consecration to her Immaculate Heart.”

Today what is asked of us is that we reconsider in an ecclesiologically correct way the basic question that underlies the entire story we have told: how can we perceive in consecrated life (in this case that of the Carmelites) and in the habit that expresses it a gift and an appeal for the holiness of all?
The ancient medievals flocked to place themselves under Mary’s garment, thereby asking her to “clothe them with Christ.”

The Carmelites wisely developed their own particular assimilation of this gift, including doctrinally, which we can express with this simple formula (simple just like the symbol of the garment is simple!): Mary wants to clothe us with her Son, and we must let her act and help her in her task, assuming the dispositions of her Son towards Her.

In a splendid synthesis, a Carmelite of the first centuries once said that Carmel has the mission in the world of perpetuating and prolonging the love of Jesus for his Mother and that of the Mother for her Son.

There are countless stories linked to the devotion to the Scapular. In our own time, it was beautiful that John Paul II permitted the sharing of a photograph from the time when he was a worker at Solvay, in which he is bare-chested, but clearly wearing the Holy Scapular that he had received as a child. He was also wearing it as Pope on the day of his attempted assassination in 1981, and he did not want it to be taken off even during the surgical operation he immediately had to undergo. And thus that Scapular soaked in blood also became a precious relic.