The Pontifical Academy of Life paves the way to euthanasia

The basic Text of the Pontifical Academy of Life (PAV) signed off by Archbishop Paglia also stumbles on the subject of euthanasia. First by giving primacy to the patient's subjectivity, but without saying that not all patient decisions are morally valid. Then by accepting the Advance Healthcare Directives and finally by foreseeing the possibility of discontinuing Clinically Assisted Hydration and Nutrition. All arguments already seen in the battles of euthanasia advocates. 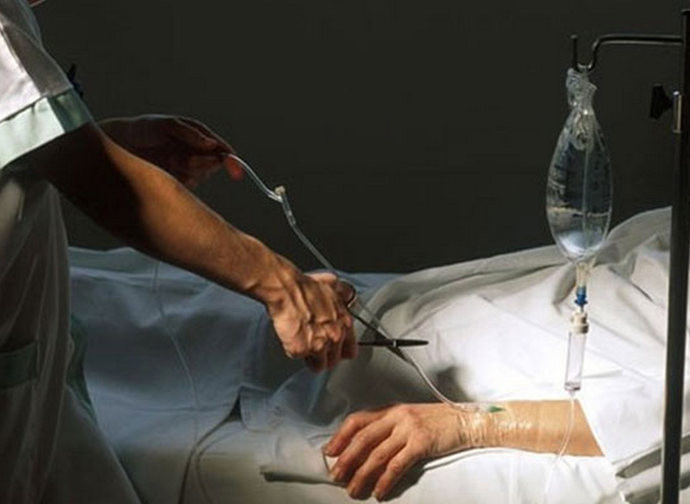 Let’s return to the basic Text of the study seminar held in Rome from 30 October to 1 November 2021, promoted by the Pontifical Academy for Life. This basic Text was collected in the volume Theological Ethics of Life. Scripture, Tradition, Practical Challenges, published by Libreria Editrice Vaticana. The basic Text also deals with the end of life. Some passages are acceptable, although the style is often deliberately imprecise and vague, others very problematic. PAV not only stumbles on contraception, as we saw the other day, but also falls on euthanasia.

Among the critical passages we highlight the following, concerning consent to treatment, even to life-saving treatment: "In the end, the choice is up to the patient, because they always remain the subject of treatment and are therefore irreducible as the object of others' decisions" (p. 405). Another passage speaks of the “assessment made by the sick person, without which no judgement of proportionality can be made: the latter has the decisive say on what concerns their own health and the medical interventions on their body. If this is not the case, they are no longer recognised as the subject of treatment, but reduced to an object at one’s disposal. [...] Thus treatment, even if clinically appropriate, may be disproportionate if the sick person does not consider it sustainable in the circumstances in which they find themself" (p. 410). In such cases one has a duty not to start or stop such treatment, the Basic Text states.

The arguments expressed earlier are not acceptable. The declaration of the Congregation for the Doctrine of the Faith entitled Iura et bona, concerning euthanasia, expresses the following on the conceptual juncture explained above: “Making decisions will ultimately be the responsibility of the conscience of the sick person or of the persons qualified to speak on their behalf, or even of the doctors, in the light of moral obligations and the different aspects of the case. Everyone has a duty to treat themself and to be treated'”(IV).

What is the difference between the basic Text and Iura et bona? Both documents refer to the patient as the ultimate decision-maker (should they be mature and capable of understanding), but for the basic Text any choice made by the latter is acceptable, indeed must be accepted, while for Iura et bona it is only the choice that conforms "to moral obligations", i.e. conforms to natural morality. Among the first obligations we find the duty to treat oneself.

Thus not all of the patient's decisions are morally valid, just because they are autonomous choices, but only those that conform to reason, the unit of measurement of natural morality. If, for example, a patient can save themself by refusing a certain therapy, which does not constitute aggressive treatment, it is morally unlawful for them to refuse it. Such a refusal would be contrary to their dignity and would therefore lead - this is true - to the reification of the person, to the reduction to an object of the person denounced by the same basic Text. From a moral point of view, there is nothing to prevent one from forcing the person to treat themself. Just as it may be lawful and often right to force off the ledge someone who is attempting suicide, so it may be lawful and often right to force the person to treat themself if, by refusing treatment, they intend to die.

This statement expressed in such an unconditional manner is to be rejected in its entirety: “So treatment, even if it is clinically appropriate, may be disproportionate if the sick person does not consider it sustainable in their circumstances”. This is the position of the proponents of euthanasia who identify the patient's will as the exclusive criterion, rejecting any objective moral paradigm. There are not only subjective parameters to understand whether a therapy is proportionate or not - perception of pain, economic burden, etc. - but also and above all objective ones. If by amputating a gangrenous foot I can save a patient's life, that surgery is certainly proportionate, notwithstanding other circumstances that we will not mention here for the sake of brevity. The surgery remains proportionate surgery even if the patient refuses it.

The perspective of the basic Text, on the other hand, privileges exclusively the subjective level, the patient's judgement - which is an important criterion, but not the only criterion to be taken into account - to the detriment of the objective level, i.e. the data in the scientific literature, the doctor's conscience and experience. Whereas in the preceding pages the basic Text criticised an approach hinging exclusively on the patient's self-determination, the same text now falls into the error denounced earlier.

The basic Text then goes on to state that the choice to refuse certain treatments because they are disproportionate can also be included in the Advance Healthcare Directives (DAT for Italian law). This judgement is also highly objectionable. In fact, the application of the principle of proportionality often, if not always, requires the actuality of such application. This is to say that the calculation of proportionality must take place in the present moment and must be continually renewed as the patient's condition changes. What might not have been aggressive treatment yesterday might become so today. So how does the declarant foresee in the DATs such situations, which determine when we have or do not have aggressive treatment, especially when they are continually evolving?

Moreover, that same instrument of the DAT presents intrinsic fragilities: outdatedness of the request, difficulty of interpretation, incompetence of the declarant in complex matters, possible conflicts of interest of the trustee, etc. Lastly, the DAT in the collective imagination is understood, correctly, mainly as an instrument for euthanasia. It therefore seems hardly appropriate to endorse their dissemination.

The basic Text then deals with the relationship between morality and law, which is treated in a very confused manner. The basic Text initially indicates three solutions that it considers unacceptable. Impose any virtue by law. The basic Text excludes this solution only for reasons of expediency related to the just principle of proportion: the damages might outweigh the benefits. But the main reason, beyond this, lies in the fact that the law must be inspired by the natural moral law insofar as it serves to edify and protect the common good. Thus not all conduct contrary to natural morality is to be prohibited, but only that which is highly detrimental to the common good. Likewise, not all conduct consonant with natural morality is to be enforced, but only that which is significantly useful for edifying and protecting the common good.

The second solution envisages not regulating certain conduct contrary to natural morality, but controversial on the social level. This refusal, for the drafters of the basic Text, is still based on the principle of proportionality already highlighted. The third solution involves legitimising immoral conduct. The basic Text rejects this solution only because it would be disliked by certain sectors of society and because it would support the principle of autonomy understood in an absolute sense.

So what solution does the basic Text propose? To soften - this is the verb used - civil and criminal liability for those who practise euthanasia. This criminal and civil softening must be the outcome of a cultural, political and legal confrontation. The principle indicated is correct in itself: there is less personal responsibility in those who kill their loved ones with their consent because they are terminally ill than in the killer who kills on commission. And in fact, keeping to Italy, our penal code already provides for lesser penalties for the killing of a consenting adult and assisted suicide than for murder.

Circumstances may affect the degree of personal responsibility, and less responsibility must necessarily have an impact on the quantum of the penalty. The basic Text, however, does not make explicit all these argumentative passages indicated here, and therefore readers may misinterpret the motivations underlying the solutions it proposes. In fact, the feeling one gets from reading this passage points to a sort of justification of euthanasia practices, which are not so serious after all. Thus it would seem that the desire to penalise euthanasia practices with less severity is not motivated on the level of subjective responsibility, i.e. by the fact that the culprit may have been moved by pietistic sentiments or may have been burdened by unsustainable psychological pressures, but on the objective level, i.e. on the level of the conduct itself, judged not too severely. But instead euthanasia remains murder and aiding suicide a formal collaboration in suicide, two conducts in themselves very serious. This clarity of judgement, absolutely necessary when dealing with such matters, is lacking in the basic Text.

The Text then also articulates some reflections on Clinically Assisted Nutrition and Hydration (CANH): "Some believe that if CANH were to be discontinued, the cause of death would be the action of the doctor interrupting the treatment and not the illness itself with its course" (p. 411). The basic Text rejects this interpretation because it is reductive: the disease would only affect that particular organ or organs and the treatment would only aim to restore the proper functioning of that organ or those organs. Instead, what is needed is a holistic approach that takes into account the “entirety of the person and their overall good” (Ib.).

Apart from the rare cases in which CANH may constitute aggressive treatment (inability of the patient to assimilate nutrients, severe imbalance of the clinical picture if the patient is hydrated and fed, cachectic state, etc.), CANH is always proportionate treatment because nutrition and hydration fulfil their own ends, namely to nourish and hydrate. Keeping alive even a severely disabled person such as a person with non-responsive wakefulness syndrome (i.e. the vegetative state) is a good and rightful action.

However, between the lines of the basic Text one can read the following argument, which is prudently not made explicit: keeping alive a person with, for example, the above-mentioned syndrome, is tantamount to aggressive treatment, because CANH would make it possible to keep them alive, but to the detriment of the well-being of the 'whole person'. This, too, is a reflection typical of the pro-euthanasia front centred on quality of life versus dignity of the person: I interrupt the CANH so that I cause the patient's death and they will no longer suffer or experience a condition characterised by very poor quality of life. That is, I perform an intrinsically evil deed (murder) for a good end (eliminating pain, removing someone from a degraded condition). But it is never permissible to do evil, even for a good purpose.