What was the source of St Joseph’s inner turmoil in the face of Mary’s divine motherhood? Two different interpretations of the scant Gospel story have emerged over time. They are known as the ‘respect’ theory and the ‘suspicion’ theory. Both postulate Joseph’s renowned justness, but differ as to when Mary’s spouse learned of the mystery of the Incarnation and what motivated him to dismiss her in secret. Let us look at them together. 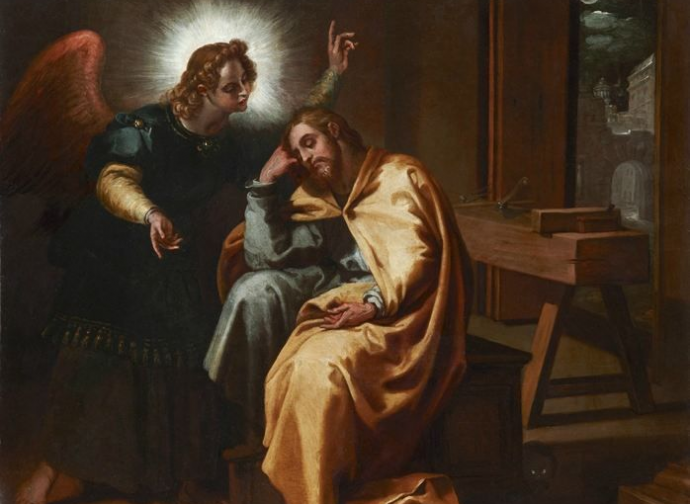 One of the most sensitive issues when it comes to St Joseph is the inner turmoil experienced by Mary’s spouse when he became aware of her mysterious pregnancy. St Matthew describes the situation succinctly (Mt 1, 18-25). As the late Josephologist Father Tarcisio Stramare (†2020) noted, “they are known as the theory of ‘respect’ and the theory of ‘suspicion’“.

According to the first theory, Mary immediately informed Joseph of her divine motherhood and he, while believing her, decided to dismiss her in secret in order to respect God’s plan and rights. This theory is reflected in the apostolic exhortation Redemptoris Custos (see especially points 2-6 and 20), published by St John Paul II on 15 August 1989. Fr Stramare himself contributed to the theological framework of this papal document, and in his books he has also argued the case for ‘respect’. The above-mentioned apostolic exhortation does not, of course, contain any dogmatic formula in this regard, although it is clearly an authoritative source of magisterium.

In the perspective of ‘respect’, the angelic announcement would have come to Joseph as confirmation of what Mary’s spouse already knew and - according to what Father Stramare wrote - would have had the purpose of “illuminating with the support of the prophet’s citation the ‘astonishing motherhood of Mary’, as Redemptoris Custos (3) calls it”. This interpretation is fundamentally based on the idea that Mary, the first creature on earth to receive the announcement of salvation, could not remain silent before such great joy. We quote Fr Stramare again: “Isn’t it natural, therefore, to think that Mary, the Announced, was also the first announcer of the Good News (this is the Gospel!), and that she made her most beloved - St Joseph - the first to be told? Moreover, being her true spouse, he is the person most interested, but also the most involved in the mystery of her motherhood”.

If one accepts this idea, the consequence is to believe that Joseph knew about the divine motherhood before Elizabeth was thus inspired by the Holy Spirit (when she called Mary “mother of my Lord”; Lk 1:43). The Redemptoris Custos is of this opinion: “Joseph is, together with Mary, the first depositary of this divine mystery [divine motherhood, ed.]. Together with Mary - and also in relation to Mary - he participates in this culminating phase of God’s self-revelation in Christ, and participates in it from the very beginning. Keeping the text of both evangelists Matthew and Luke in mind, we can also say that Joseph is the first to participate in the faith of the Mother of God, and that, in so doing, he supports his bride in the faith of the divine Annunciation” (RC, 5).

In order to justify the reason for the painful decision to dismiss Mary in secret, the theory of respect argues that Joseph considered taking a step back before the divine Majesty incarnate in Mary. Fr Stramare points out: “Like Moses, Joseph also knows well that he is facing the “burning bush”: “Come no closer!” (Ex 3:5). On this basis, it is emphasised that Joseph was still unaware of the very high role that God had planned for him, a role of which the angel’s words “and you shall call him Jesus” (Mt 1:21) will be a sign. 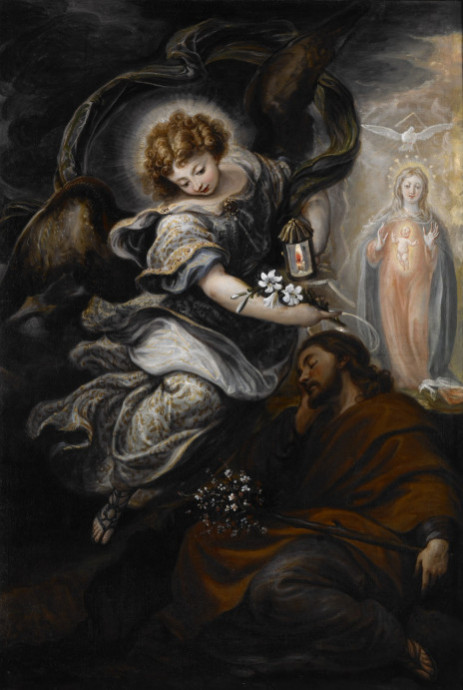 The so-called ‘suspicion’ theory, which is very widespread, assumes instead that Joseph’s turmoil arose precisely because he was unaware of the divine motherhood. In other words, he was unaware of the cause of the pregnancy, which was clearly evident to him. Yet, by virtue of his justness - praised in the Gospel (Mt 1:19) - and by virtue of Mary’s holiness, which was manifested to him every day, he suspended his judgment with holy prudence. Mary had kept silent about the mystery out of humility and, before that, because she had not received permission from God to reveal it. She had therefore submitted totally to the divine will. This theory, according to its supporters, would be more in keeping with the meaning of the Gospel text and in particular with the liberating revelation of the angel in a dream, who begins by telling Joseph not to be afraid to take Mary to him, “for that which is conceived in her is of the Holy Spirit” (Mt 1:20).

Regarding the justness of Joseph, who in spite of his tribulations always took care to safeguard Mary, a doctor of the Church such as St John Chrysostom writes: “‘Just’ here means perfect in every virtue. Joseph, therefore, was just, which means full of moderation and goodness, wanting to send her away in secret. The Gospel makes known the thoughts of this holy man, before he knew this mystery [divine motherhood, ed], so that we ourselves might not doubt what happened when he learned about it. How extraordinary are this wisdom and virtue! He is so pure and so free from passion that he does not even want to afflict Mary in the smallest things. Since, on the one hand, he believed that he was violating the law by keeping her with him and, on the other hand, to dishonour her and to call her to trial was to expose her to death, he did neither the one nor the other thing, but behaved in a way that is already far superior to the ancient law”. For his part, St Jerome observes that declaring Joseph just has another admirable link with his bride: “This is a testimony in Mary’s favour: Joseph, knowing her chastity and astonished at what had happened, hid with silence her whose mystery he did not know”.

From this point of view, therefore, it was on the still unknown mystery that Saint Joseph’s doubts and, certainly, his humble and fervent prayers to God for enlightenment were focused. It can be noted that the intervention of the divine messenger reflects a heavenly symmetry, which arranged an angelic Annunciation for both Mary (Lk 1:26-38) and Joseph (Mt 1:18-25).

According to a servant of God of our times, Don Dolindo Ruotolo, “St Joseph became aware of this [the pregnancy, ed] because of Mary’s changed condition”, but he “could not think badly of a Virgin whom he knew to be unblemished”. Don Dolindo goes on to note that “the Blessed Virgin, for her part, did not dare to reveal to him the mystery that had taken place in her and entrusted herself to the Lord, as it seemed to her that it could be incredible without a special light from God”. This special light arrived at the height of the tribulation, and Joseph immediately put his faith in it.

We find the same basic themes - Mary’s silence and Joseph’s inner struggle - in the heavenly revelations transmitted to two mystics whose virtues the Church has already recognised: Blessed Anna Katharina Emmerick (†1824) and, above all, the Venerable Maria of Agreda (†1665). While the German nun’s account is fairly brief, the Spanish nun’s Mystical City of God deals extensively with the Passion of the two spouses (cf. Book 4, chapters 1-6). Her work also enjoys the privilege of having been recommended to all Catholics by Blessed Innocent XI and other Popes after him.

Ágreda relates that Joseph realised that Mary was pregnant when she was in her fifth month. She kept silent for the reasons already mentioned, and he did not dare to ask. Joseph asked God for enlightenment, wondering about “some mystery that I do not understand”. In turn, Mary prayed to her guardian angels to console and enlighten her spouse. The heroic acts of the couple would continue for two months. In the end Joseph planned to leave in secret because, although he was very sad at the thought of losing the company of a bride he considered “most perfect”, he could find no other solution to his distress. But first he prostrated himself on the ground, made a vow to the Lord and asked Him to protect Mary from calumny and all evil.

Providence, says the Venerable, arranged everything in such a way that Joseph and Mary reached “the extreme of inner pain” so that the divine consolation would be greater, and to offer the world the example of their holiness in the face of tribulations. These came to an end on the very night Joseph had planned to leave, when Mary’s spouse in a dream received the announcement from the angel (Gabriel). “After the sufferings endured by my most holy Son, what made me suffer the most were the tribulations of my husband Joseph, especially those of the circumstance of which you are writing”, confided Our Lady.

The intensity of the tribulation, explains Ágreda, increased the glory of Joseph who, through it, deserved “to be prepared by God for the unique benefit that He was preparing for him”. His humility, already firm, was profoundly strengthened after this trial because, considering himself unworthy to be served by the Mother of God, he humbled himself even more. The Lord filled him with the fullness of knowledge and other heavenly gifts. He enlarged his heart and made him understand how to serve worthily the very high ministry of being Mary’s spouse and, therefore, God’s father.