The Parable of the Sower, a theme dear to van Gogh 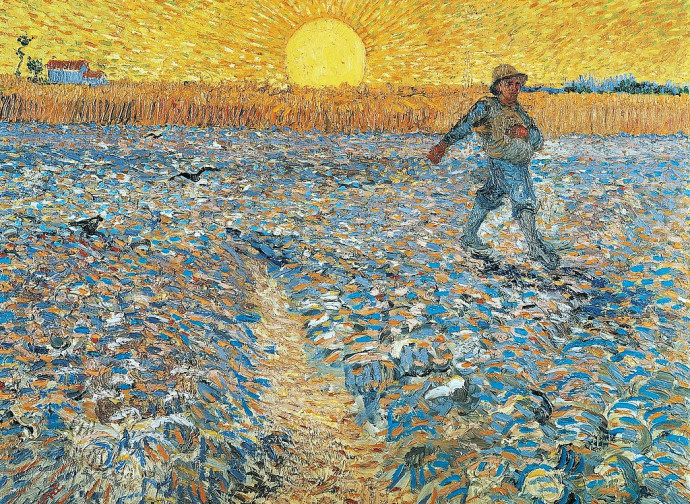 As we know well, Jesus had a great impact on humanity and changed the face of the world. During the period of His public life, we see the Redeemer in contact with vastly diversified people, on whom He left His mark. And it could not be otherwise: Jesus heals, soothes the wounds of body and soul, even raises the dead, and speaks life-changing words to those who listen to Him. This is what happens with parables: short stories that Jesus uses to convey, in simple words, concepts that are sometimes very difficult, but which require reflection and much discernment. The characters and actions in the parables are often symbolic and full of mystery.

"Parable" in Hebrew is mashal, which means ‘story’. Drawing on scenes from everyday life, the parable constructs a comparison intended to illuminate a different reality. It was known to the rabbis and is already present in the Old Testament. The parable is a literary genre similar to allegory, but with a difference. While in the allegory all the parts of the narrative are reflected in the reality it is intended to imply, the parable focuses on a central teaching at which the entire narrative is aimed, illuminating a hidden and unknown reality. The intention of the parable is therefore theological: it reveals something of the mystery of the Kingdom of God, although the Kingdom, as the evangelist Luke explains, is Jesus himself.

There is even a parable that explains... the enigma of parables: it is that of the sower. It teaches us that the meaning of the parables is revealed only to those who are in some way already within the mystery of the Kingdom, to those who were 'imbalanced’ by following Jesus.

“And again He began to teach by the sea. And a great multitude was gathered to Him, so that He got into a boat and sat in it on the sea; and the whole multitude was on the land facing the sea. Then He taught them many things by parables…” (Mark 4:1-2).

The statement Jesus makes, as reported by Mark, is surprising and may even seem to be an injustice:

"To you the mystery of the kingdom of God has been confided, but to those outside all is revealed in parables, so that they may look but not see, and hear but not understand, lest they be converted and forgiven". (Mark 4:11-12). We quote here, albeit with some variations, a passage from Isaiah that expresses in a Semitic way how even the rejection and misunderstanding of God's plan by the people is intended for the good of mankind and its salvation. The fact that some do not understand frees them from the responsibility of rejection and makes their salvation possible. Those who do understand, however, are included by the Mystery and therefore led to grow and strengthen themselves in it, entering into the logic of the Kingdom.

The Parable of the Sower is present in the Synoptic Gospels (Matthew 13:1-23, Mark 4:1-20 and Luke 8:4-15). The Dutch painter Vincent van Gogh (1853-1890) devoted a great deal of attention and reflection to this parable and produced several drawings and paintings on the subject.

Van Gogh was born in a small village in Dutch Brabant (Zundert). This region, located on the border with Belgium, belonged to the Netherlands, which was Protestant. But in terms of religion this area received Catholic influences from Flanders. Vincent's father and uncle were Protestant pastors and belonged to the Groningen School, a reform movement that arose in the nineteenth century within Dutch Calvinism and was inspired by Thomas of Kempis' The Imitation of Christ and John Bunyan's Pilgrim's Progress.

Vincent himself, after a number of failures (not only in work, but also in love), matured a religious vocation in England. For a time he thought of following in his father's footsteps. The attempt failed, but he did manage to devote himself for a time to preaching as a lay evangelist. There are a number of sermons on the subject of sowing where van Gogh compares God to a sower who 'infuses his blessing in the seed of his Word sown in our hearts'. (Sermon of 1876).

Let us re-read the Gospel parable by looking at the work The Sower at Sunset, - painted by Vincent in 1888 in Arles, Provence, during his stay with Gauguin in the Yellow House. The painting, an oil on canvas measuring 64 x 80.5 cm, is kept in the Kröller-Müller Museum in Otterlo.

Then He taught them many things by parables, and said to them in His teaching: “Listen! Behold, a sower went out to sow. And it happened, as he sowed, that some seed fell by the wayside; and the birds of the air came and devoured it. Some fell on stony ground, where it did not have much earth; and immediately it sprang up because it had no depth of earth. But when the sun was up it was scorched, and because it had no root it withered away. And some seed fell among thorns; and the thorns grew up and choked it, and it yielded no crop. But other seed fell on good ground and yielded a crop that sprang up, increased and produced: some thirtyfold, some sixty, and some a hundred.” And He said to them, “He who has ears to hear, let him hear!” (Mark 4:2-9)

Van Gogh worked by contrast, just as Mark did in his parables: the yellows alongside the purples, the nervous brushstrokes reproducing the roughness of the ground, the displaced clods, the beaten earth of the path. As the sower is at one with the soil, so Vincent is at one with his painting. The scorching sun of the south of France is reinterpreted in a mystical key and the whole scene is imbued with religious symbolism. Van Gogh, moreover, had looked to his great Barbizon master, Jean-François Millet (1814-1875), known for the mysticism present in his scenes of peasant life. But he had dressed the brown and grey tones of the French artist with the luminous colours of Provence.

In this painting van Gogh gives a personal interpretation of Mark's parable by identifying himself with the sower. Through his painting, Vincent felt that he was as much a sower of the Word of God as he was a lay evangelist. Meditation on the Word inspired him not to retreat in the face of the lack of recognition of his art, but to transfer all of himself into the colour and subject matter before him. This is a great lesson for us: Christ, in narrating the parable of the sower, wants to prepare His own for the tragedy of the cross. A tragedy of which He would speak openly in the following chapters of the Gospel.

This parable enables us to understand that the mystery of the Kingdom does not obey the logic of success or mass conversions, but knows the logic of the seed, which entails waiting, maturing, modest beginnings, and slow but constant developments.

Also in 1888, Van Gogh dedicated another canvas to the theme of the sower: The Sower of Winterthur. It is an oil on canvas, measuring 72×91.5 cm, exhibited at Villa Flora in the Swiss city of Winterthur. The landscape has changed profoundly, we are in autumn and the blazing sun of summer has disappeared. All mysticism has gone; the sky is the backdrop for an ordinary city. The promise of a bountiful harvest, so present in the other work, where it was represented by the yellow ears of corn, here vanishes and the artist's attention is entirely focused on the ground.

Vincent's relationship with Gauguin had already deteriorated by this time and he sensed that the projects he had cultivated with his friend were soon to be shattered. This painting therefore expresses the melancholy of an autumn of the soul, in which the perception of approaching winter gives way to the fear that the seed will not ripen, will not withstand the rigours of the frost and will succumb.

The works depicting the Parable of the Sower, like his other canvases, powerfully express the art of this immense artist, who painted grace and the need for religion through the most humble objects. 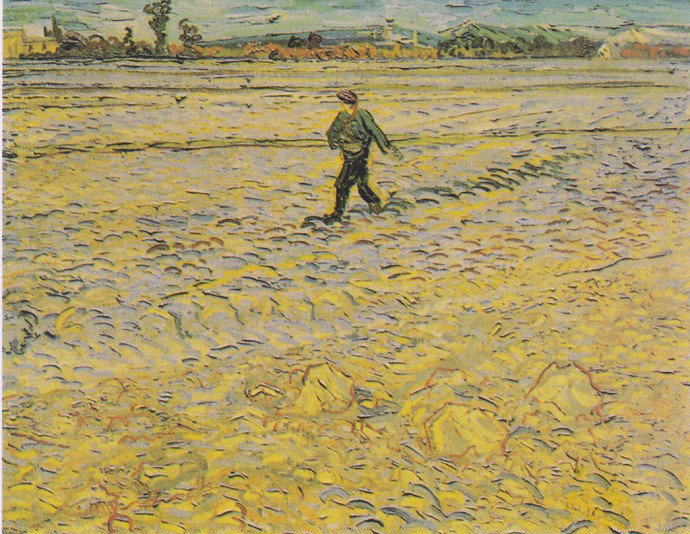