The liberal religious who support Democrats

The Democratic Convention opened in Milwaukee to formalize Biden's candidacy. Progressives who espouse the cause of "new rights" will be at the convention. The American bishops call for a choice based on non-negotiable principles 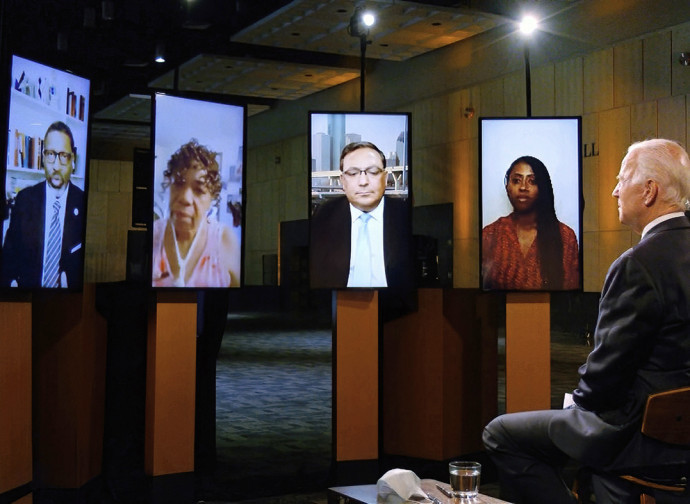 The Democratic National Convention is now taking place. It has crowned the Biden-Harris tandem. It is much more an electoral and mass media show rather than a real challenge for the candidacy, given the withdrawal of all the contenders  who stand all united in prayerful solidarity to mudsling their common enemy, Donald Trump. The U.S. Catholic Church will not participate and asked faithful to carefully considerer the consistency between the Gospel teachings and the political platforms of the two candidates, Biden and Trump.

The democratic group of 'interfaith leaders' has tried to present its reasons for supporting Biden. It was an attempt that was not authoritative, vain, unfounded and frankly evanescent. On 14 August the Catholic Church, after an employee had publicly declared her support for Kamala Harris in the days leading up to the convention, issued a very harsh press announcement: "At no time were staff of the Episcopal Conference authorized to speak on behalf of bishops in support of or in opposition to candidates running for elected office. Since the comments in question may have led to confusion among faithful, it is good to be clear: as Catholics, each of us is called to evaluate candidates for public office based on how much their policies align with Gospel principles, as expressed by the U.S. bishops in Forming Consciences for Faithful Citizenship.”

The 2016 document explicitly calls for a correct formation of consciences for faithful when participating in the public and political life of the nation. The indications of the American bishops draw heavily from the Social Doctrine of the Church and the Doctrinal Note of 2002, recalling from its introduction that the current challenges concern the promotion of human life since conception and the destruction of millions of lives through abortion, as well as the ongoing drama of assisted suicide, the abandonment of the sick and elderly to euthanasia, the promotion of the natural family, and the 'unjust' redefinition of marriage in favour of LGBTQ. It also mentions the dangers of limitations imposed on religious freedom, personal conscience and the works of charity done by religious. It is a clear document, a guiding moral compass that clearly indicates the direction in which the choices of Catholics must be made. Everything is clear for Catholics, especially after Biden's commitments to multinational abortion companies and the aims and actions which Kamala Harris has always taken against pro-life agendas and in favour of LGBTQ lobbies

It is not a coincidence that only two religious will be present at the Democratic National Convention: the pro-gay  Jesuit, Fr, James Martin and Sr, Simone Campbell, already an open supporter of Obamacare which caused a great deal of suffering to Catholic hospitals and clinics who refuse to allow abortions. Among the pro-Democrat religious leaders present, some of whom will speak, are: Rex Lee Jim (President of the Navajo Nation), Neelima Gpnuguntla (from the Hindu Community in Dallas), some Methodist and Episcopalian bishops, the leader of the Islamic Nation of Milwaukee, Imam Noman Hussain, the Vice President of Latin American Evangelical Community, Jeanette Salguero, and Rabbi Sharon Kleinbaum of a New York Jewish congregation. All of them, of course, share in the liberalisation of abortion, the LGBTQ ideology, gay marriage and adoption. All this is an unhealthy feeling of solidarity and is unfounded, being devoid of the common recognition of the Fatherhood of God and the consequent dignity of all human beings from conception to natural death.

In addition to the remarks made by the US Bishops’ Conference, we must take note of the very recent attacks made by 150 leftist organizations and lobbies while acting in support of Biden and Harris. They requested the total closure of the Anti-Defamation League, an international organization that defends the rights of Jewish citizens and communities in the U.S. and around the world. This is a another clear sign of 'democratic' intolerance towards Jewish Christian communities and values. It is the umpteenth false step by the Democrats and the Biden-Harris ticket. It may also weigh heavily on votes in November. Also because of all this, we can understand the threatening insults and growing polemics against the Democrat’s enemy number one, President Trump, who is now considered a target to be shot down, and not a political opponent to be defeated electorally, thanks to their seemingly convincing political proposals.

The Democratic Convention will close on Thursday 20 August. It will be a crescendo of unprecedented attacks on Donald Trump and the Republicans. Everything will be done to raise violent reactions against him and hide his successes as president in the areas of religious and educational freedom as well as pro-life and pro-family policies.

It is essential for the Biden-Harris team (as it was for Obama and Clinton candidacies) to divert American citizens’ attention from their socialist and democratic immorality and from the results of the investigations and consequent indictments that the Justice Department will communicate in the coming weeks regarding Russiagate, which has tormented Trump's presidency from the very beginning. In a few weeks' time, Americans may not only take note of the blatant religious immorality of the Democrats, but also of the abuses of institutional power by the entire Democratic establishment and by many in the US media. It concerns an unreliability, both in moral and institutional terms, and borders on delinquency. It will become increasingly evident, despite the manipulation of global media in the weeks to come.